Gebo and the Shadow (O Gebo e a Sombra)

As great as Manoel de Oliveira’s new film Gebo and the Shadow (O Gebo e a Sombra) is it wouldn’t be surprising to see it receive much less of an enthusiastic response than that which met his previous two features. Gebo is not as buoyantly ebullient or spritely in attitude or effect. It is by far a more dour, even dire, affair. That’s quite appropriate though as the tone fits the material—in this case a rather uncharacteristic, by Oliveira standards, depiction of the underclass, the outright poor. The film is a rigorous examination of basic assumptions put into dialogue. It’s a profoundly serious treatment of its themes and as such rare and precious.

There are echoes as always of his previous work but Gebo takes certain aspects of that further and functions again as a cumulative index of themes and as such a possible culminating “final film”. He has treated poverty before, perhaps most notably and directly in 1994’s A Caixa. That too was based on a play and significantly stage bound in terms of effect though it was actually shot on location. The theater backdrop in Gebo is more prominent and pronounced; there is much painterly photography too but also an occasional CGI quality that recalls Tim Burton. Oliveira plays with formal elements like framing, for instance, turning the spartan courtyard/living room of the family home into an overt set for subdued theatrical spectacle. Other artful details emerge, such as a window becoming a possible mirror to the past for one character briefly. The digital medium frees Oliveira up some but mostly on the level of this kind of effects work. He has yet to take it as far as Raul Ruiz did in Mysteries of Lisbon though Leonor Silveira, speaking at a press conference and quoted briefly in an online article, said that Oliveira once wanted to use the medium to shoot Gebo in one long take, but was strongly discouraged by his producers.

This film also recalls the sepulchral, hermetically closed in qualities of his Day of Despair (‘92) and Fifth Empire (‘04). But both of those are more opened out or vast in terms of scope than this. Here there is just as much emphasis on what is closed down, permanently foreclosed for characters who harbor little remaining active hope.

The story this time, based on a play by Raul Brandão, is constructed as a seemingly pure portrait of this suffering by an impoverished family. The first half hour is almost entirely devoted to charting that particular terrain in exhaustive detail. The coverage extends beyond a depiction of material circumstances and into the different ideas and societal notions that animate action. Gebo (Michael Lonsdale) is the long suffering patriarch of a small clan which has imploded in the wake of the disappearance and eight year absence of his adult son João (Ricardo Trêpa). Gebo has resigned himself to a dignified silence dedicated to his accounting books and protecting his wife Doroteia (Claudia Cardinale) from the full extent of their son’s absence, lying to her that he has been heard from and wishes her well. Their ritualistic routine behavior is a comfort of a sort, just in terms of its reliable sheer regularity. The lies are meant to be a comfort as well though they do not alleviate the suffering but merely soften the blow. Oliveira draws a line of distinction and similarity through these well intentioned falsehoods and the fantastical illusion of art itself, noting their capacity for consolation and forcing a question as to their ultimate worth or legitimacy. But the question is answered or at least addressed within the milieu of these people in this place, sharing an assumption as to the worthiness of their suffering. The characters are fastidiously set up in order for these very assumptions to be challenged.

Gebo is really concerned with what constitutes noble or admirable action as well as with the interplay between truth and duty. The lines of clear restricted definition are blurred in unsettling ways, unsettling because of their implications for the established structure of society itself. For the character Gebo moral responsibility is an idealized virtue which is itself made manifest by moral compromise. Deceit then is capable of being cast as the virtuous by product of noble motives. Duty is positioned as or perceived to be morally preferable or superior to truth with justice and honor disassociated from the necessity of honesty. While others around him may bemoan their station and circumstance his response is that “I can’t be anything else” and he declares “What’s needed on these occasions is for each one to know his duty”. Gebo’s own unwavering stance may be presupposed upon a veiled determinism though no more so than that of João as evidenced in his assertion that “I’d rather rebel and then die.” There is the suggestion throughout the film that civility may always require a certain amount of servility from someone. 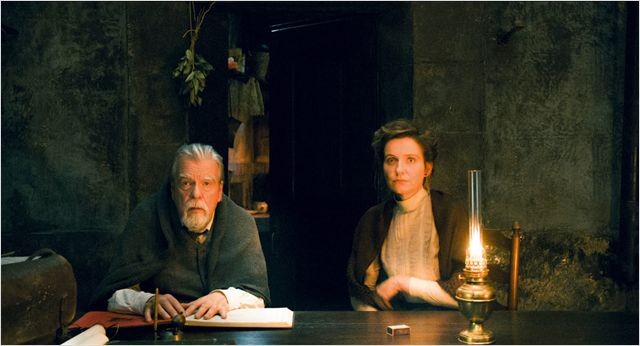 The responses of these characters to their situation and any disruptions of it are clearly conditioned by their experience and ethical investments. Gebo is a succinct economical illustration of these active forces informing behavior, as in the scene when João’s wife Sofia (Leonor Silveira) glances at the statue of the Virgin for inspiration and encouragement. The last few years have been a series of such spare economic exercises by Oliveira. Here the emphasis is upon the social structures and perspectives that exist to sustain the characters while arguably keeping them complacent, unquestioning and unreflective.

João’s eventual reappearance is handled in what seems at first a peculiar low key manner for such a longed for return but it’s fitting considering the lack of closure and introduction of disarray and dislocation he brings with him. His whole purpose in returning in fact seems to be to introduce that discord to the existing stable, though tenuous, social structure, one definable to that point by the unwavering acceptance of its absorbed ideals. João is almost a dream figure within his own home once he returns, capable of existing only in the margins, in the shadows. His ideological purity contrasts to that of the others and crafts for him an identity almost purely as dialectical partner. He is the “resurrected son” whose longed for return offers no messianic deliverance (it’s interesting to note the way in which this character echoes that of the similarly mythologized King Sebastian in Oliveira’s Fifth Empire –both played by Ricardo Trêpa). João embodies the radical disavowal of the stranglehold of any restrictive socializing structure or standards, antique idealized notions such as honor for example; he is the defiant, anarchic free radical in purest form but one with no regard either for anyone else or anything other than immediate gratifications (as he says, “I am he that causes suffering and laughs”). To accomplish something more structured or to accommodate others into his system of being would be impossible as his chaotic natural state would disallow it and any society is a false one for him. Regardless, his re-imagining of self is not free from the resonance or implications of established ideas of proper duty; they are, in this case, mediated by a revolutionary ethic, one easily reconceived by those in opposition as the logic of a criminal. Still, his philosophy is not without a certain poetry, at its best recalling that of someone like Jean Genet. João recognizes his elders and even his wife as monstrous by their acceptance of oppressive standards, thus requiring an extreme transformation in response. His family persists in viewing him as pitiable but he neither deserves nor desires their loyal sympathies. He does not expect them as he would not want to be expected to provide them. Such loyalty and charity too exist as modes of conceived ethical conduct which are available and can be applied in combinations but not without the real risk of a compromise in idealized standards. The purity cannot so easily hold and it’s part of Oliveira’s accomplishment here to demonstrate how these combinations complicate what João considers merely “petty lives”.

There is much concentration on the impact of standards either compromised or complicated. Well meaning falsehood can bring its own suffering, for instance. Gebo suggests that happiness is irrelevant in an ultimate sense yet the presumed happiness of his wife is paramount to him. The film is filled with the effects of conflicting alternate or opposing conceptions of the “good” life –the worthy or appropriate way to live– as well as the conflicting direct experiences of individuals. This is not unusual for Oliveira as a textual strategy and is actually one of his finest qualities but here it’s presented in a more concentrated form than is typical. Complications arise continually within these pure, idealized conceptions (to take just one, Doroteia’s view of her son’s actions: positioning them as an understandable, even admirable reaction against the resignation to poverty; representing them as a noble ambition).

Gebo is directly moving in a way that isn’t common in Oliveira’s cinema. But it’s also bleak and devastating in a way that isn’t either (by contrast his portrait of an impoverished community in A Caixa is far more broad and absurdist). This is exactly the kind of serious appraisal of all our collective standards of living that we need now. It is, in fact, a scrupulous study in that range of responses (acceptance, deference, revolt –all seen as potentially noble pursuits in their own way, all adhering to an unyielding conception of reality or truth). It is a similarly aggressive inquiry into the extent of ideas as 1999’s La Lettre but veiled behind a seeming passivity or complacency that aligns with the characters apparent own. As always it’s about the way perspectives must be recognized as ironically incomplete regardless of their conceptual finality; they each qualify one another just as the characters often disparage one another. The extreme nature of Gebo’s final moral stand, affected even as it is by complicating counter currents, makes the point that the purity of this as abstract representation far exceeds the specific manifestation of the idea. As in La Lettre again it is a confrontational stance which demands our response to its extremity and our own determination of how far is too far to go with any moral conviction. We can see that no one position is unassailable. Oliveira however only provides us the material for our examination. Any conclusions, and the recognition of them as also always only incomplete, he leaves to us.