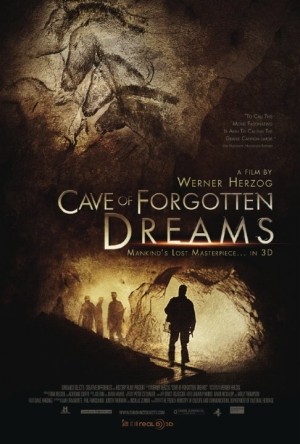 Those of us who love art know its power to fill the imagination, mind, and spirit; to charm and delight; to heal and inspire; to correct, to share wisdom; and we are sometimes, many times, mystified by those for whom art means nothing. In Werner Herzog’s documentary Cave of Forgotten Dreams, an investigation of cave paintings proved by radiocarbon dating to be more than thirty-thousand years old, we have evidence of how ancient, how elemental, how primal is the impulse to create art. Herzog, the creator of the films Fitzcarraldo and Grizzly Man, refers to the cave in which the paintings are found as being “like the frozen flash of a moment in time,” with the paintings seeming both familiar and distant, the “memories of long forgotten dreams.” Obviously, such appreciation and knowledge can be shared—and used to buttress arguments on behalf of art; and the existence, the fact, of these old paintings reveals how fundamental and natural is the spiritual life that art represents: human nature itself is illuminated.

Watching the film Cave of Forgotten Dreams, which has been shown in three-dimensional and two-dimensional screenings, we move over a field sprinkled with white, from which we can see a snowy mountain, and we are shown a river in southern France, and told of male and female persons searching for caves by sensing the shift in air currents emanating from the earth: and the searchers find, in 1994, a cave which has been sealed for thousands of years by a rock slide; and inside are cave paintings, mostly of animals such as horses, bison, and rhinos, paintings about thirty-two-thousand years old, an exploration of which Werner Herzog and his small film team subsequently are allowed by the French culture ministry to film in 2010. With geologists and other scientists and art historians, Herzog approaches the wooden walkway that has been built outside the cave, and goes through the steel door that has been installed in what is now called Chauvet Cave, after Jean-Marie Chauvet, who found the caves with Eliette Brunel Deschamps and Christian Hillaire. The four-person film crew, including principal photographer Peter Zeitlinger, has time constrictions and are not allowed to go off the prescribed metal-floored path in the cave or to touch anything there; and they only have three-foot cold light panels to use for filming. The film’s photography is often beautiful but is sometimes jittery.

The visitors see the original cave entrance, still shut by the fallen rock; and then they begin to see the art—large red dots made with hand-prints; a bison with eight legs, suggesting movement (“proto-cinema,” says Herzog); and we are told of the people and animals, including lions, bears, and other carnivores that once lived in the area and inspired the work. One image is of a woman’s lower body, and is compared to Venus figures, figures of beauty, sexuality, and fertility, featured in small sculptures by other primitive cultures. Some of the cave wall paintings are marked by the subsequent claw scratches of bears. There is a natural residue over the “familiar yet distant” paintings which take thousands of years to form. In certain instances, it is found that overlapping figures may have been painted five-thousand years apart. There are old, sometimes fossilized bear skulls, sometimes crystallized bones, in the caves. Water dripping in the cave has created its own sculptures. Laser scanners have mapped the entire cave, which is thirteen-hundred feet long. One archaeologist, Julien Monney, says that after entering the cave he began to dream about lions; and another man, the research project director Jean-Michel Geneste, says that landscape enters memory, imagination, and storytelling: and the film viewer senses a great circle. The landscape and the animals that lived in the area inspired the ancient artists, and discovering their paintings men alive now are inspired anew to imagine that early world. That world is both primitive and immense. 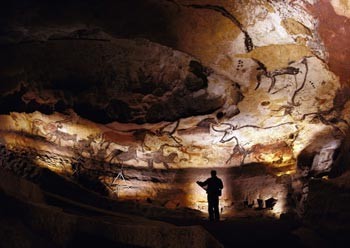 The French archaeologist Julien Monney, a slender, long-haired man who was once a circus unicyclist (and who, with his mobile face, moustache, and neck scarf, looks like a swash-buckling poet out of a French romance), talks about different ways of seeing art; and he mentions that aboriginals in Australia see the artistic tradition as less about personality and time than about the transmission of spirit—and so a contemporary painter can touch up the fading image of an ancient painter. That idea certainly explains how overlapping images could have been painted thousands of years ago but also thousands of years apart. The significance of the endeavor for particular Paleolithic painters is illustrated by the maker of the red dot palm prints: a slightly crooked little finger allows the scientists to follow that artist’s markings in different parts of the cave—he was someone who continuously made images. Someone had an eye for the rare thing—one drawing of a panther is, apparently, the only known panther picture of the Paleolithic era. There are also drawings of an insect, and a butterfly. (We do not see the image of an owl, a scratched painting, that haunted Herzog but which was too difficult to photograph for inclusion in the film; something Herzog spoke about with the journal Paris Review in 2011.)

Herzog’s documentary Cave of Forgotten Dreams introduces us to scientists looking at the evidence, documenting it, making sense of it, such as Gilles Tosello and Carole Fritz (it may be entirely irrelevant, but the two look like a middle-age country couple). Some of them work in a building complex near the mountain cave. They are devoted to a small but very significant chapter in human history, using their gifts, their skills, to preserve experience and fact and knowledge for the rest of us. They are not artists, but they use some of the same resources as artists, such as imagination and thought—and, as with artists, a rare, mysterious passionate spirit urges them on. They photograph the drawings and paintings, and go back to their lab and make transparent replicas of those photographs (tracing over the photographs of drawings and paintings on transparent sheets) and then return to the caves to check their work against the originals. The researchers want to understand what was done, how, and what it means. The film’s score is full of energy and tension; and is a counterpoint to the calm talk, suggesting some of what is at stake. (The score is by Ernst Reijseger; and was called “new-agey” by Manohla Dargis in the New York Times, April 28, 2011, but described as “a gorgeous meld of string-based orchestrations and choral harmonies” by Justin Chang in Variety, September 14, 2010.) The scientists learn facts about long-ago lives—that fading fire torches were brushed against cave walls to get rid of old ash and reveal still-burning matter (the black strokes remain); and that cave lions did not have manes (males and females are depicted without them); and we, the film viewers, the descendants of early men and women, know that as we are observers, early men and women were observers, as their depictions of horses taking breaths and rhinos fighting prove that awareness.

Herzog, who is allowed with his crew to spend a short time alone in the cave without the scientists, refers to what he sees in the caves as “great art,” thinking that it is “as if the modern human soul had awakened here.” One does not want to disagree to be contrary, but the term great art suggest rigors that this work may not have, rigors having to do with the conscientious creation of objects in light of aesthetics, ethics, standards, and, most of all, established tradition; and while the conscious human mind or spirit may be evident in the cave paintings, modernity is something else—having to do with great reserves and discriminating use of knowledge, technology, and self-awareness, with a consciousness and appreciation for ambiguity, complexity, and even contradiction. Modernity requires civilization. Much of what we see in Herzog’s documentary are simple line drawings, and some pictures are painted, filled in, with one solid color, usually black. There is no doubt a mastery of line, and a fulfillment of intention, but is there enough complexity or variety? Is there enough evidence to make claims of greatness and modernity? Is the fact that we are interested and pleased enough? (“It’s their age and durability over the centuries that impress more than the aesthetics,” wrote film journalist Doris Toumarkine in Film Journal International, April 27, 2011.) How much of the depth we find is the depth that we ourselves bring?

In Werner Herzog’s Cave of Forgotten Dreams, we see related finds: in German caves, little statues, not paintings, are found; and a very old flute is still playable, able to sound the “Star-Spangled Banner.” (The flute is played by Wulf Hein, an archaeologist; and Wulf Hein plays the flute dressed in animal skin, a modern man assuming a primitive pose.) We are told about how ancient man hunted with spears that could be thrust or thrown. We hear comments about the evolution of spiritual consciousness; and the assertion that to be human is to adapt to the world, to landscape and other beings; and to remember, to create symbols, to express. In other words, there is the typical human insistence that human existence means something—and that these cave paintings must mean something to us: it is not unique to have artists and scientists insist on meaning (an indivisible part of their professions and social purposes). As always, whether meaning exists, and what that meaning is, is very much up to each of us.

Daniel Garrett, a child of the American south, Louisiana, where he grew up reading, taking photographs, and enjoying fishing and a good summer barbecue. Daniel moved to New York and became a graduate of the New School for Social Research, was an intern at Africa Report, poetry editor for the male feminist magazine Changing Men, founded and acted as principal organizer of the Cultural Politics Discussion Group at ABC No Rio and Poets House, wrote about painter Henry Tanner for Art & Antiques, and organized the first interdepartmental environmental justice meeting at Audubon. Long interested in human complexity, intelligence, experiment, and cultural diversity, Garrett has researched various cultures, and he wrote about fiction and poetry for World Literature Today and international film for Offscreen, and has done music reviews that constitute a history of popular music for The Compulsive Reader. His work has appeared as well in The African, All About Jazz, American Book Review, Black Film Review, Cinetext, Contact II, Film International, The Humanist, Hyphen, Illuminations, Muse Apprentice Guild, Option, Pop Matters, Quarterly Black Review of Books, Rain Taxi, Red River Review, Review of Contemporary Fiction, and Wax Poetics. He returned to the south, where he worked on philosophical fiction, the novel A Stranger on Earth.