Sergei Eisenstein has always been the pride of the Soviet cinema, but it was not until after perestroika , and especially after the collapse of Communism, that Russian theoreticians began to freely explore the national-psychological roots, cultural aspects and sexual motifs in his creative works. Oleg Kovalov, a well-known critic, film theoretician and historian from St. Petersburg, turned to experimental film-making as a way of expressing his ideas more eloquently. For his debut Scorpio Gardens ( Sady skorpiona , 1991), he uses a medley of film material to construct genre and ideological clichés of the totalitarian era’s Socialist Realism. The cultural aspect also dominates his second film, made out of found footage – Island of the Dead ( Ostrov miortvykh, 1992) – a tribute to the 100th anniversary of Vera Kholodonaya. Through the life of the mysterious and strikingly beautiful star of the Russian silent cinema, the director allows for a glimpse into the confrontation between the decadent lifestyle and culture of the ‘‘silver age’‘ with the thrust of the revolutionary avant-garde. His first feature film with live actors, Concert for a Rat ( Concert dlia krysy , 1995) is inspired by Danilo Kharm’s absurdist prose and is a tribute to the 100th anniversary of this famous St. Petersburg’s intellectual. With Eisenstein. Autobiography ( Sergei Eisenstein. Avtobiografia , 1996) and Eisenstein. Mexican Fantasy ( Eisenstein. Meksikanskaja Fantazia , 1998), Kovalov pays yet another, double tribute: to the centennial of cinema and of Eisenstein, respectively.

Eisenstein. Autobiography is Kovalov’s original attempt to translate in images his long-time critical musings on Eisenstein. The point of time is 1929, when Eisenstein embarked on a lengthy journey to the West. The film is structured as a free flow of associations, a montage film in the truest spirit and style of Eisenstein, by mixing rare archive shots of Eisenstein himself; footage from his films and films of his contemporaries. In a psychoanalytic fashion, Kovalov links recurring visual themes from Eisenstein’s films with the director’s own shockingly personal reminiscences: his early torment over the divorce of his parents materialises in scenes of abused and neglected boys; the anger against his pedantic and tyrannical father – in representations of apocalyptic revolutionary violence.

Kovalov finds in Eisenstein one of the most creative interpreters of what he, following Berdyaev, calls the Russian Idea: the search for an ‘‘ideal’‘ existence for the nation in a radiant future, transcending history. An idea which proved to be central and extremely fertile for the Russian culture immediately before and after the Revolution. Following Eisenstein through the tragedy of two revolutions into the onslaught of Stalin’s terror, Kovalov demonstrates that Eisenstein’s films resolve the potentially destructive contradiction between reality and dream; present and future; old and new by immersing the new Communist mythology into the old, religious-messianic mythology. It is the latter that takes over in the exuberant and rich images of his films, thus downplaying the rigid conventionality of the former. And Kovalov makes a point in bringing out motifs and icons that relate to the messianic “Russian complexes”, deliberately misinterpreted as symbols of the new ideology by self-serving official critics. As a proof, he includes the episode with the death of Vakulinchuk on the ship’s rails in the canonical pose of a martyr and a saint ( Battleship Potemkin , 1925). Another example is the scene with the mythological abundance, miraculously brought about by Marfa Lapkina’s infamous milk separator, shot to look like Aladin’s magic lamp ( The Old and the New , aka The General Line , 1929).

On the other hand, Eisenstein’s cosmology can be interpreted in the context of world cultural and mythological traditions. Building on the assumption that his symbolism is universal, Kovalov offers an interesting version of Eisenstein’s unfinished film about Mexico by editing what was left of the 75 000 m material. Most of it was kept in the States and part of it was destroyed in a fire. In a way, Eisenstein. Mexican Fantasy is a chronological supplement of Eisenstein. Autobiography since the shooting took place in 1930. The scope of his project was the natural primordial beauty of Mexico before Columbus, ecstatic, tragic Mexico from the times of Dias’s dictatorship, Mexico in revolt and the new Mexico from the early 30s. The film is built on sharp bi-polar oppositions: white vs. black; sun vs. shade; nature vs. culture; poor Mexican peons vs. rich Spanish colonists. The mythic character of the narrative is further emphasised by Kovalov through the dominant images of the elements: the nurturing dampness of water is coupled with the soft curves of naked female breasts and playful erotic scenes in the shade. The dry stony land is rhymed with the phallic symbolism of spear-like cactus leaves, knives and the orgasmic images of men, avidly sucking on cactus leaves under the blazing sun. The Spanish conquest is played out as a sinister masquerade. The spontaneity of the village dance and the tragedy of the peon rebellion are juxtaposed with corrida – both as a site of elaborate courting and flirting and of a ritualised massacre. The film is a deliberate challenge to the connoisseurs of Eisenstein as Zussmeier’s version of Mozart’s unfinished Requiem still is to the connoisseurs of his music.

With his two Eisenstein films, Kovalov contributes to the ongoing debate about the role of sex, eroticism and sensuality, the feminine and the masculine in Eisenstein’s works. The representation of violence seems to be the dividing line. Kovalov vehemently opposes the argument that a revolution, be it the uprising on board the battleship Potemkin or the reforms of Ivan the Terrible, is saturated with destructive phallic symbolism, while the masses, as the object of these revolutionary changes, are endowed with ‘‘feminine’‘ features. Kovalov sees violence as an expression of physical, but mainly spiritual impotence; neither feminine nor masculine, but the attribute of a being that is not able to realise itself in any constructive way. Boris Blank’s film, Eisenstein’s Drawings ( Risunki Eisensteina , 1997) suggests a lighter, more playful approach to Eisenstein’s sensuality. The film is organised as a series of episodes, separated by piano intermissions and inspired by important events and influences in Eisenstein’s life. It is also a montage film, with excerpts from Eisenstein’s films, ironically juxtaposed with his erotic drawings: ‘‘Betrayal” and ‘‘Revenge”, for example, are directly related to Eisenstein’s break up with his long time friend and assistant, G. Alexandrov. Then there is an episode, referring to the women in his life, called “Cherchez la femme”; another one is linked to Stalin, ‘‘The Father of the People’‘, etc.

Eisenstein’s close friends (V. Shklovski, N. Cherkasov) claimed that he drew explicitly erotic sketches of key episodes in his films – like the famous ‘‘furnace rite’‘ from Ivan the Terrible II , which is included in Blank’s film. Or the long lost series of drawings, called King Penis, created during the shooting of Ivan the Terrible I . Quite a few of the drawings, used by Blank, come from a series made in preparation for the third part of Ivan the Terrible. They however prove that having extolled the destruction of the Russian culture for the sake of the beauty of a revolutionary rebellion, Eisenstein returned to the ideals of his youth, to the sophisticated ‘‘silver age’‘, which valued highly the wonderful ambiguity of Queen Elizabeth’s time and mannerism as its key style. He planned to create a film about the relations between the two courts – that of Ivan the Terrible and of Bess the Ginger (as the Russian king called Elizabeth I), finding pleasure at describing decadence at a most unlikely place and time – that of the gory reign of Ivan the Terrible. Unfortunately, this project never materialised. 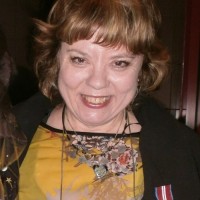 Christina Stojanova is Associate Professor at the Department of Film, University of Regina, Canada. She contributes regularly to the specialized and academic print and on-line media, and her writings are translated into many languages. Co-editor of the critical anthologies Wittgenstein at the Movies (2011) and The Legacies of Jean-Luc Godard (2014), she is the editor of The New Romanian Cinema (2017) and The Legacy of German Expressionism (2018). Her book on Canadian animator Caroline Leaf is forthcoming in 2018. Member of the Quebec Film Critics Association, Christina regularly sits on international film festival juries.