Blood Simple (1985) is a “neo-noir” film directed by Joel Coen and produced by his brother, Ethan Coen, under the production company name of River Road Productions which can be considered to follow the practices of the so-called “New Hollywood Productions.” In fact, this idea of the new American cinema which emerges in the 1980s, as independent production companies, which need to patronize and eventually cater to the Hollywood film production apparatus, is a controversial categorization that seems to generate strong opposing critical standpoints. Independent films made in the 1980s mark the beginning of the “Hollywood Renaissance” and they appropriate new wave techniques for the commercial cinema. In effect, a “binarism” of high (elite/critical) and low (mass/popular) cultures lies at the heart of a film like Blood Simple where modernist features, such as aesthetic attitudes and textual discourses, are used to produce a “different form” of mass cultural texts. Such a high/low “binarism” is part of the dynamics of reception for independent film texts which are defined and assimilated within a particular reading formation. The structural form of this critical/popular reception is multifaceted because it extends not only into the modernistic reactions of the critical reviews but also into the specifics of the “text-as-read,” that is, when the audience actually consumes the film-text itself in the process of viewing; in our case, the particular text of Blood Simple is “film noir.” It is the “noirness” qualities that create the metafictional text for this film since they make it highly readable in the face of high art modernistic stylization. Hence, Blood Simple is an “independent hybrid,” conceived as a semiotic structure with a “different form” of popular mainstream production and mass consumption which effectively deconstructs the contrast between high and low culture. It is characterized by “New Hollywood Practices” which present identifiable genre texts (eg. the hard-boiled detective film) that subverts the unidentified set of conventional Hollywood elements that flow through “film noir.” Blood Simple is a commercial/independent film that negotiates the extremes of the standards of “film art” and “good commercial film.”

Blood Simple is a self-conscious film and therefore deals with a “metafictional text” that thematizes certain kinds of discourses (eg. high realism) and sets them up in a representational space so that it can mount counter discursive arguments against them. The Coen brothers’ film negotiates a complex spectator reception with the critics and mass public. First, a self-conscious cinematic sophistication is expressed through the modernistic technique of “excess stylization” that announces the camera’s presence and renounces the self-effacing illusionism of Hollywood narrative cinema. Second, it combines this self-motivated style with the commercial appeal of enjoyable entertainment, reflecting an audience that is still entranced with the classical Hollywood texts.

Blood Simple is a “neo-noir” film that subverts the mainstream Hollywood conventions. It follows the spirit of Arthur Penn’s Night Moves (1975), a Watergate era “neo-noir” film of multiple betrayals. Film noir is a trend in the American cinema that evolves out of the popular literature of the period, starting after WWII (eg. Raymond Chandler’s series of noir novels) and to some extend with German expressionism. Film noir is a post-WWII phenomenon with textual features and artistic attitudes that reflect the return of combat veterans whose lives had been disrupted by the war. Compounded with the problems of a national industry geared for the war and its subsequent shift to a civilian economy after 1945, it is difficult for the war veterans to adjust to a normal life. Film noir is the effective combination of the detective/crime genre and melodrama which creates its own particularly stylized cinematic universe with references to other film genres and movies, as exemplified by the prototypic film noir of, say, Billy Wilder’s corrosive Double Indemnity (1944). Film noir is not a genre per se but instead, it is more like a ‘souled type’ or ‘category’ of films with a tendency for “romantic” or “expressive” realism; since it permeates the narrative matrix of well defined genres, such as the mystery thriller or the crime romance, and flowing through them there’s an unidentified set of Hollywood conventions, which form a collective locus for certain critical discourses within the American cinema of the late 1940s and early 1950s. But with the advent of the great economic boom of the 1950s and 1960s, the “noirish” trend of the postwar cinema is replaced by the new wave movements. The film noir period effectively ends with Orson Welles’ deep focus, high contrast black-and-white film, Touch of Evil (1958). 1 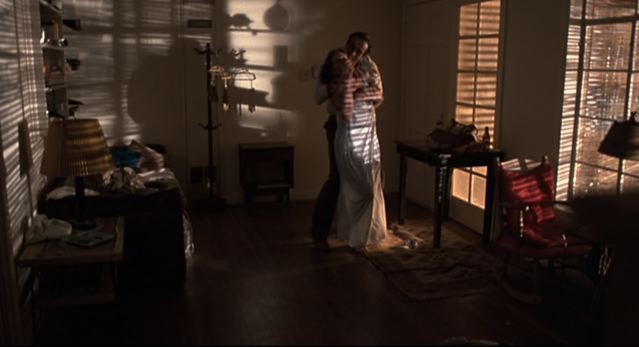 In the 1980s, films with a literary quality are among the adult fare in the theaters, one of these adult genres or types is “neo-noir” which is characterized by its moral confusion more than its specific political condition. Thus, this “neo-noir” trend, toward textbook reworkings of the older film noir genre-type of the late 1940s, becomes an important form of American film practice in the 1990s. In circa mid-1980s, the Coen brothers borrow certain features from the questionable and ambiguous world of the early film noir films and suffuse them with the existential crises of the late 1970s post-Watergate/Vietnam and early 1980s right-wing Reaganism, all of which express the breakdown of the American value system and of its continued spiral downward into the existential void. Blood Simple is the metafictional text of the subversion of the conventional Hollywood elements of film noir and expresses its postmodern attitudes through a stylistic excess as opposed to the minimalist of such films as Jarmusch’s Stranger Than Paradise (1984). The film’s excessive style is an heightened universe of the senses, similar to David Lynch’s dangerous and unfamiliar world of Blue Velvet (1986).

Blood Simple is a very sensorial cinematic universe where emphasis is put on the physicality of what is seen and heard in the denouement of the narrative. The Coen brothers’ film deals with the phenomenology of being in the world where such ideas are transposed to film noir. The process of transposition is accomplished through camera and art direction strategies which act as “containers of meaning.” In effect, the film’s narrative meaning and experiential meaning fall outside the film script because a lot of the screen time is devoted to action with no dialogue, building on a Hitchcockian story telling concept where narrative significance is communicated through visual and aural means. Blood Simple plays continuously on the partialism that exists in our range and depth of knowledge, not only about the characters and their relationships, but also about how we, the spectators, respond to the film; since the narrative and perceptual levels depend on our incertitude of what is seen and heard. The film makes us question how we, the viewers, understand this excessively stylized universe, causing us to continuously revise our understand of it; and just like the spectators, the characters can’t trust anyone because they can’t depend on what they see and hear. Thus, the characters aren’t sure of what is happening around them, just as the spectators aren’t sure what is thoroughly happening on the screen. These last sentences form the film’s basic idea as described by Hal Hinson in the article entitled “Bloodlines” (Film Comment, January-February 1985, Vol. 21, No. 1, pp. 14 – 19): “… we are dependent in our judgments upon what our senses tell us, and that our senses lie – that in life we never really know what’s going on … nothing is exactly as it seems.”

Blood Simple is a “neo-noir” anomaly in the independent film community when compared to those filmmakers who have opted to rework the film noir formula; for instance, Lawrence Kasdan’s Body Heat (1981), a film characterized by a postmodern loss of historical depth and one that uses pastiche and intertextual reference. Blood Simple is a gothic noir thriller with fatalistic black humor and wittingly mordant satire. The film’s uniqueness is identified through its use of the layering of the characters’ points of view which create a huge complexity of contradictory perspectives. As Hinson puts it: “All the characters in Blood Simple are able to see only part of the whole picture. Each character has his own point of view in the film, his own version of what has happened and why … only the audience is given the whole picture … Just as we think we’re in synch with the film, they (i.e. the Coens) shove our assumptions back in our faces. Like their characters, we’re making a mistake by believing what we see.” 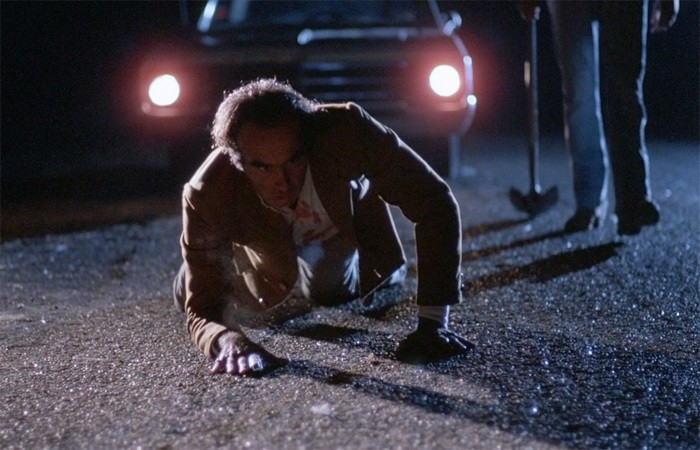 As mentioned above, Blood Simple is an anomaly in contrast to Body Heat‘s “femme fatale” as the phallic woman; since in the former hard-boiled genre, the depiction of sexual aggression is non-existent because the sympathetic lover’s affair is tepid and upstaged by the sleaziness and mangy amorality of the villains. In fact, the Coen brothers’ film is structured in counterpoint with the narrative beating against the narrator’s disposition to it, that is, their story is grimly fatalistic but with an upbeat tone; such an approach to a “neo-noir” film deviates from the norm among the New Hollywood Independents. Moreover, the cinematography is markedly different when comparing the visual styles of Blood Simple and Body Heat. The latter is filmed by the cinematographer, Richard Kline, who creates an overexposed look to the images with excessive halation; while the former seeks real non-diffuse images akin to those produced by Vittorio Storaro’s cinematography, a complex and elliptical visual style that borders on surrealism in Bernado Bertolucci’s The Conformist (1970).

Blood Simple‘s cinematographer is Barry Sonnenfeld, whose story boarded visuals are ironically repetitive and psychological; and at times, they entirely dominate the momentum of the script, that is, real and/or virtual camera movement drives the visually narrative stylistics. He deftly utilizes certain visual devices (eg. match cuts, sound crossovers, and camera locked-down dissolves) to distort space. Other technical film-apparatus devices are used, such as the “shakicam,” a 2” x 144” piece of lumber with doubled ended grips which damps out much of the vibration that is transmitted to a center mounted camera when it is being moved through space, to create a kinesthetic feeling of a floating camera. The “shakicam” is appropriated by the Coen brothers from Sam Raimi, the director of The Evil Dead (1982), who discovers its initial usage by cinematographer Caleb Deschanel on More American Graffiti (1979). Another film-apparatus device that simulates the floating camera effect is the “speed rail,” a tackle block-and-fixed wedge (~ 25-30 feet) made of pipe ringing, which is used to strap down actress and camera (+ cinematographer), nearly face-to-face and 4 feet apart, and capable of pivoting 90 degrees on itself during a shot. This device is attributed to the expertise of the key grip, Tom Prophet, who uses it to create the visual transition between two scenes in one shot and the effect of floating.

Another important element that factors into the excessive stylistics of the Coen brothers’ film is the almost totally unmotivated (i.e. the light sources are not seen in the frame) lighting that creates an added psychological effect with a dark high contrast look. In effect, the lighting is geared to produce saturated blacks, where hyper-dark shadows become an effective characterization in the film.

A last note about the film’s nomination, Blood Simple gets its title from Dashiell Hammett’s novel ‘Red Harvest,’ as the term ‘Blood Simple’ describes the fearful mindset of its characters, after lengthy exposure to excessive violence.

David George Menard is a Polymath Physicist and Filmmaker, a Physics MSc graduate from the University of Tennessee Space Institute, Tullahoma, TN. David went to work for Martin Marietta Missiles Systems, the Electro-Optics Division, in Orlando Florida. Unfortunately, circa 1990, the Soviet Union collapsed and many scientists lost their jobs. So he began a new career in filmmaking, attending the Mel Hoppenheim School of Cinema in Montreal, graduating with a MFA in film production in 2010. After which, he moved to Los Angeles and began writing screenplays, continuing to do so while promoting “Termite Cat Productions, Ltd.”