A Dimension Beyond Characterization

In a narrative film, whether it is considered classical cinema or art cinema, mainstream or independent cinema, one routinely finds embodied characters. Characters are constructions who follow a specific arc which may be a highly developed cause and effect amalgamation of traits, or their characters may remain ambiguous and undeveloped. But in David Lynch’s film Inland Empire (2006), Laura Dern as Nikki Grace/Susan Blue, gives new meaning to the words “being in the moment.” Dern’s character is continuously placed in a variety of situations that have no obvious narrative connection and in which her character is called upon to respond to each “given circumstance,” moment by moment. 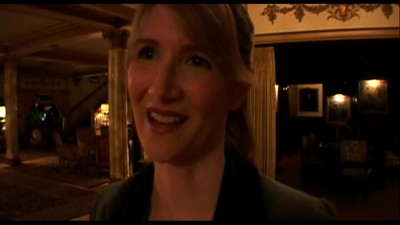 The word “momenticity” is a neologism which I will use to explore the concept that Dern is called upon to renegotiate her role continually, and be only and entirely “in the moment” for the duration of the film. This in itself is not unusual, because all good actors are “in the moment” for the entirety of their performance, if they are gifted and committed. However, in Inland Empire, there is a continual seismic movement within the film as the moment-to-moment behaviours of Dern change as she performs different characters, creating gaps and fissures in the film’s texture. Even when Dern plays the same character, the given circumstances are subject to sudden shifts. The circumstances skid about precariously, ungoverned by logical or predictable patterns. “Given circumstances,” a notion coined by Stanislavsky as well as his proponents (e.g. Sanford Meisner, Lee Strasberg, Uta Hagen, et. al) are normative in classical screen/playwriting, and for that matter, in improvisatory exercises. But in Inland Empire these circumstances continually shift in ways that confound audience expectations rather than utilizing character arcs, or arcs are used that undergo intense fragmentation are obliterated in mid-flight before a resolution is achieved. Dern addresses this in an interview on the making of the film, in which she says that she has never had to be more “in the moment” in any work that she’s done, and that it required her to give up anything but the moment for the duration of the shooting period. The actor says that she never had a more challenging piece of acting in her career. We are drawn into the circumstances by the power of Dern’s acting, but just as swiftly our attention is enmeshed in a distinct, disparate circumstance, as Dern renogiates her performance by playing a character in an entirely different register. This movement calls forth a position of engagement and non-engagement on the part of the spectator, and engenders a fair amount of confusion as well.

David Lynch has been using meditation as a tool for invoking his creativity for over 35 years. He has remarked repeatedly in both filmed and print interviews that it is these periods spent in a meditative state which enable him to derive a great deal of his inspiration, and allow his imagination to reach states it could not attain in a rational mode of thought. (He often meditates for 3-4 hours each day in the afternoon, which is why he often films at night.) It is an avowed method for the stimulation of Lynch’s creativity. One of the guiding principles of meditation is a “detached awareness,” a state in which one is able to “see” thought and emotion as if they are pictures passing before one’s eyes, rather than getting wrapped up in the stories, the plans, the intrigues, the content of the thoughts and emotions. Thoughts and emotions become passing phenomena that keep changing from moment to moment, which is precisely what occurs in Inland Empire.

Other notions that are central to the process of meditation and that permeate Lynch’s oeuvre in general, and Inland Empire most particularly, are movement between surrender (of the ego in meditation) and extreme alertness. One is taught in meditation to be like a cat watching ten mouse holes at the same time. So, rather than being in a trance-like state, the meditator is, in actuality, more mentally responsive and alive to possibility. Further, as meditation evokes events as passing phenomena, the idea of centripetal as opposed to centrifugal creation of scenes becomes one of the major narrative tropes of Inland Empire. There is a scene in the film in which Laura Dern’s character lies dying, while the camera focuses on an Asian woman discussing the bus schedule to Pomona, as well as an African-American woman who repeats, “She’s only dying” (which calls to mind the notion that death is but another stage of being in the constantly evolving world.) There is a pull between the mundane and the critically important in which the latter is not privileged or made narratively or visually central, so that again, the spectator must engage in a state of continual play. This in turn leads one to a sense of identity that achieves a heightened state of fragmentation –if nothing is more important than anything else, how can the self be more important than the “other,” or even death itself. There is a strong call to the “non-rational I” as discussed by Robert Bresson –an inexplicable view of identity that goes a long way toward offering a mode of explicating the various characters Laura Dern inhabits during the course of the film. 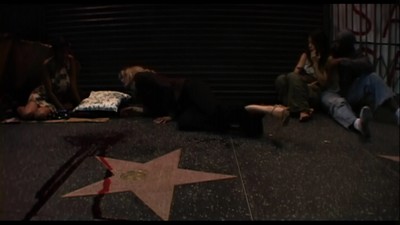 David Lynch is not trying, in Inland Empire, to reinvent performance; he is not modeling a new paradigm, but partaking of a paradigm shift, in which performance is required to be something other and different to anything heretofore seen in narrative films, and surely, this work is part of the mode of filmmaking called experimental narrative. Lynch may be viewed alongside his precursor, Carl Dreyer, who said: “I have no disciples.” Lynch discourages acolytes. Lynch is utterly unique in his vision, and his work on Inland Empire emerges from his desire to explore both the new technology he is using (digital camera), his two-decade working relationship with Dern, and his own very individualized sensibility.

Inland Empire operates in extremis and frequently defies ratiocination. The film does not make “sense” in a traditional way, but it nevertheless is pregnant with potential meanings. One needs to come to terms with the film not as a problem to be solved, but as gesture toward embracing the unknown and the defiant and sometimes messy work of a visionary.

Carole Zucker is internationally known for her work on performance studies, and has lectured and published in Europe, the U.S. and Canada on this subject. Her areas of research interest also include the horror and fantasy genre; contemporary film theory; narrative theory; New German cinema; Japanese Cinema; aesthetics; Irish Studies; concepts of excess; adaptation, and film script analysis. She also teaches private acting workshops in Canada, the US and the UK. Her research has been supported on numerous occasions by grants from the Social Sciences and Humanities Research Council. She has published extensively on women and the Gothic; narrative theory; postmodern fairy tales; performance theory and the history of Irish Cinema for various U.S., Canadian, and UK journals, as well as having her work extracted in The London Times. Zucker’s publications include: The Idea of the Image: Josef von Sternberg’s Dietrich Films (1988), Making Visible the Invisible: An Anthology of Original Essays on Film Acting (1993), Figures of Light: Actors and Directors Illuminate the Art of Film Acting (1995), In the Company of Actors (1999) with a foreword by Sir Richard Eyre, Conversations with Actors on Film, Television, and Stage Performance (2002), and the recently published The Cinema of Neil Jordan: Dark Carnival(2008), with a foreword written by Stephen Rea. Her latest book, Neil Jordan: Interviews is forthcoming from University of Mississippi Press, in early 2013. She has also recently completed her first feature script, Lamia.