Are Women Magic? Ray Carney’s Speaking the Language of Desire

Apart from my interest in the subject, I had two particular reasons for wanting to read Ray Carney’s Speaking the Language of Desire: The Films of Carl Dreyer (1989). First, I greatly enjoyed Carney’s more recent Cassavetes on Cassavetes (2001), which I read a couple months ago, and wanted to read more of his work. Secondly, in a footnote to a review of five books about John Cassavetes (four of them by Carney), Jonathan Rosenbaum mentions that he devotes a lot of space in this book to attacking David Bordwell’s The Films of Carl Theodor Dreyer (1981), and as a passionate admirer of Bordwell’s work in general and his Dreyer book in particular (notwithstanding the chapter on Gertrud [1964], which Bordwell himself has repudiated), I was especially eager to find out what Carney’s objections were. 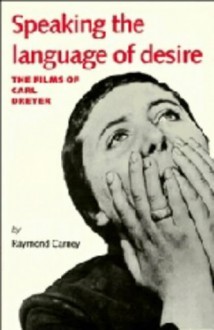 Those objections take up much of the book’s first chapter, “The Active Soul: Approaches to Dreyer’s Style.” After critiquing the tendency of writers like Tony Pipolo to read symbolic meanings into isolated stylistic events, 1 Carney proceeds to fault Bordwell for going too far in the opposite direction in contending that Dreyer’s style contains no meanings whatsoever. Instead, Bordwell argues Dreyer is a parametric filmmaker whose style develops independently of his narratives—a characterization of Dreyer’s movies that Carney finds “repellent to the normal range of human interests and sympathies” (7). But while Bordwell’s hefty tome may not appeal to the sort of “common, intelligent, curious” readers and viewers Carney envisions as the ideal audience for his book (11), it nevertheless gets at something fundamental about the experience of watching Dreyer’s films—namely, their profound and enduring weirdness—and it’s precisely in this regard that Carney’s book is lacking.

According to Carney, Dreyer’s heroines—particularly, Anne (Lisbeth Movin) in Day of Wrath (1943), Inger (Birgitte Federspiel) in Ordet (1955), and the title character in Gertrud (Nina Pens Rode)—embody transcendental impulses too amorphous and volatile to be expressed in words. However, unlike such purely “visionary” directors as Alfred Hitchcock, Woody Allen, and Michael Snow (to cite just three members of Carney’s personal Academy of the Overrated), Dreyer agreed with Cassavetes, Henry James, and Emily Dickinson that such impulses are meaningless without concrete expression. 2 And to illustrate this point, Carney makes a suggestive comparison between Johannes (Preben Lerdorff Rye)—the mad brother in Ordet, whose lofty spiritual declarations have no impact on his family members except to cause them grief—and the housewife, Inger, who’s unique among Dreyer’s characters in having the ability to express her most elevated thoughts and feelings in everyday acts of kindness and affection. 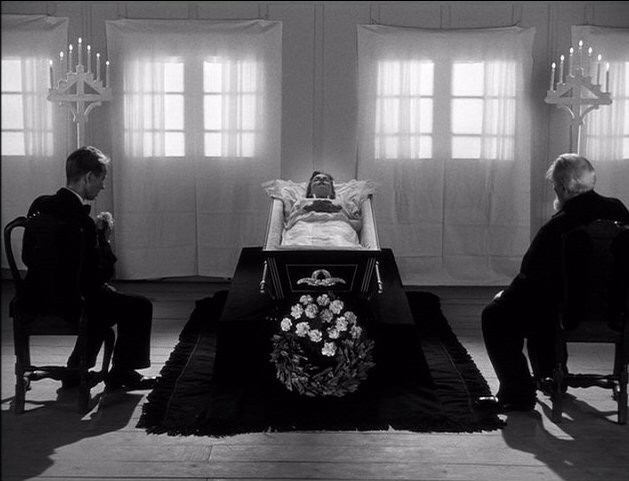 The limitations of Carney’s thesis start to become apparent in his chapter on Day of Wrath. As Bordwell and Kristin Thompson have pointed out, it’s deliberately ambiguous whether Anne and Herlofs Marte (Anna Svierkier) are actually witches who use their powers to rub out Anne’s aged husband and another clergyman or if the two men die of natural causes. Therefore, one can’t view the film simply as a melodrama about the church’s oppression of women—or as a horror movie, for that matter. But for Carney, the film is less about witch hunts per se than how all societies try to repress expressive energies that resist organization or control. Accordingly, in a chapter running over 65 pages, he never once mentions the deaths of the two clergymen or Herlofs Marte’s accurate prediction that Anne will follow her to the stake. Thus, Carney makes the movie sound more straightforward than it really is while placing the viewer in the superior position of knowing witches aren’t real, whereas all the characters in the story firmly believe they are (including Anne and Herlofs Marte).

Even more dubious are the claims Carney makes for Dreyer’s style. In particular, he contends that the patterns of attached shadows that flicker across Anne’s face in the second half of the movie (which lack any realistic motivation) not only serve to underscore the parallels between her and Herlof’s Marte but convey flights of imagination that realistic representation cannot. 3 Similarly, Dreyer’s camera movements in Ordet imply mystical connections between the characters who, on the surface of things, appear to be totally alienated from one another. And in Gertrud, the characters often speak without making eye contact, as if their attention were divided between the prosaic conversations they participate in and imaginative possibilities they can never realize. In support of this last assertion, Carney quotes Dreyer as saying:

[In Gertrud] the idea has been to have the actors’ faces in focus all the time so that the audience can read their thoughts, eventually one character’s thought while the other speaks. Why must a dialogue scene be bound to the idea that one either sees people in profile or sees one actor with his back turned around? That way the interplay between actors can be easily washed out. (286)

Notice that Dreyer speaks only of the practicalities of staging a dialogue scene for the camera and says nothing about the characters’ spiritual yearnings or the social and psychological forces constraining their expression. Indeed, if Dreyer meant to imply by their looks that the characters were turning away from the world to “dwell in possibility” (107, 347), why does he have Gertrud’s husband—a career civil servant Carney describes as being exclusively concerned with social appearances—stare into space with her? What’s more, Carney argues that Dreyer puts the viewer in a meditative state similar to that of his characters by stripping his mise en scène to the bone so that the word of the story seems to lose its solidity and becomes phantasmagorical. 4 A simpler explanation, in keeping with Dreyer’s emphasis on actors in the statement quoted above, is that his style makes the smallest nuances of the performances perceptible to the viewer.

Carney makes his most sweeping claims for Dreyer’s style in his chapter on Ordet, which he says represents “a breakthrough into a new form of representation” (196)—one where “the individual actor is dethroned and replaced by the relationship as the fundamental unit of experience” (195). As Carney sees it, there’s a profound philosophical difference between classical continuity editing and Dreyer’s long take style: “Rather than being isolated and excerpted, characters’ words and actions are socially, temporally, and spatially contextualized” (198). But what is classical continuity editing if not a system for contextualizing words and actions spatially, temporally, and socially? Surely no one watching a film by Hitchcock (or Cassavetes, for that matter) has the impression that the characters slip into some private, atemporal void whenever the movie cuts from a group shot to a close-up, or that they cease to exist when they’re not on camera.

Furthermore, as Carney is well aware, Dreyer wasn’t the first director to employ such long takes. Therefore, in order to make the case that Ordet is utterly without precedent, he’s obliged to take a swipe at Hitchcock’s Rope (1948), 5 yet he fails to make any meaningful distinction between Dreyer’s long takes and Hitchcock’s as shots, writing only that, “Dreyer justifies his use of the long take and extended traveling shot insofar as he employs them to suggest complex networks of interdependence between his figures” (197), whereas “it is the absence of complex social relationships and emotional involvements in Hitchcock’s film that makes his camera work so trivial, that makes it so much merely a technical achievement” (197-98). In other words, to judge by Carney’s remarks, the difference between Dreyer’s style and Hitchcock’s is purely a matter of what they show rather than how.

But perhaps the most serious problem with Carney’s book is simply that it’s sloppily written and maddeningly repetitive. Carney never met a suffix he didn’t like, so we get sentences like, “Repetitions… are deliberately used to frustrate the narrative appetitiveness of the viewer and induce in its place a state of meditativeness” (271-72), when he could’ve just said “appetite” and “meditation.” But this is a minor quibble compared with Carney’s tendency to go over the same points again and again. The quote above, from his chapter on Gertrud, is presaged roughly 200 pages earlier in a chapter on the limits of realistic representation: “In frustrating the viewer’s narrative appetence… Dreyer is engaged in a radical act of redirecting of our attention from outer to inner realms of eventfulness” (77). And once more, a little later: “The retardation of the pace of both the characters’ movements and the movement of the camera [in Day of Wrath]… shift the drama inward” (119). It’s almost as if Carney decided to apply his ideas about Dreyer by writing a book so repetitive and frustrating that the reader begins to turn away from the words actually printed on the page and meditates on a transcendental Dreyer book that can only exist as an imaginative possibility. 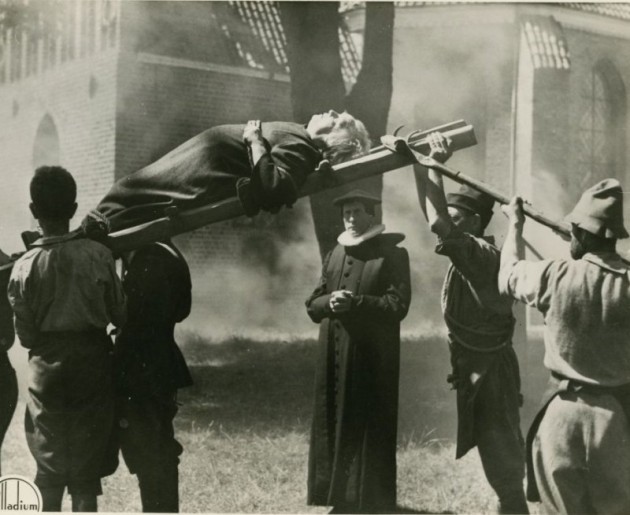 Day of Wrath: The Witchhunt