A Private Fear of the Unknown: Planet of the Vampires (Mario Bava, 1965)

Once again, I feel like Morgan Freeman’s character in The Shawshank Redemption (1994). I’m sitting in a dark theater, watching a movie I’ve already seen at least a dozen times. As familiar images roll on the screen, I’m anxiously waiting for a particular shot that I consider mine. In the Stephen King adaptation, Red is obsessed with Rita Hayworth’s glamorous entrance in Gilda (1946). Repeated viewings of the film noir always provoke excitement in the prisoner’s mind. Albeit similar, my own fascination with a specific scene doesn’t conjure any form of titillation. On the contrary, I’m well aware that I’m about to see something truly nightmarish. And yet, I need to observe it one more time, in the hope of finally confronting my fear of the unknown. 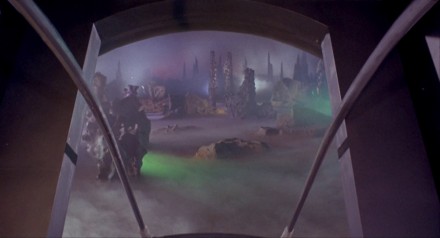 The true strength of any horror film should lie in its capacity to terrify with a single image, one so expertly crafted it imposes itself as a vision of primal angst. Examples are rare and fundamentally subjective. The ones I keep in a murky alley of my cinephiliac museum include the white face of a demon surrounded by darkness, an animated headless horseman and a little girl nodding her head while holding a ball. Those brief moments have different origins, from established masterpieces to forgotten grade-Z productions. The overall quality of the film they respectively come from has no impact on their power. Fingers being sliced over a brick of butter in Olaf Ittenbach’s The Burning Moon (1997) has always been a source of mighty abjection. The combination of blood and fat – of red over yellow – disgusts me more than the movie’s gorier scenes, including its final carnage. Even though I never really cared for the German sleazefest, I own it on DVD specifically for that shot.

Another horrific moment I adore can be found in Mario Bava’s Planet of the Vampires (1965). The first time I witnessed it, I could not fully understand the effect it had on me. I most likely tried to overcome an unexpectedly strong emotion because it had not much to do with the narrative I was watching. it is after all very trivial. One could even consider it a trope in sci-fi films from the 60’s. It goes like this: an astronaut thought dead is now possessed by the spirit of an alien creature (the “vampires” from the English title). As he peacefully tries to communicate with two scientists, he’s suddenly interrupted by the scream of a disgusted woman. She’s alarmed by a mortal wound on his belly, revealing his insides. Without showing any sign of pain, he quickly covers the mass of red flesh with his coat. In a single take, Bava shows the audience that there is no humanity left in that body. Moreover, he emblematizes a Lovecraftian concept of interstellar terror. 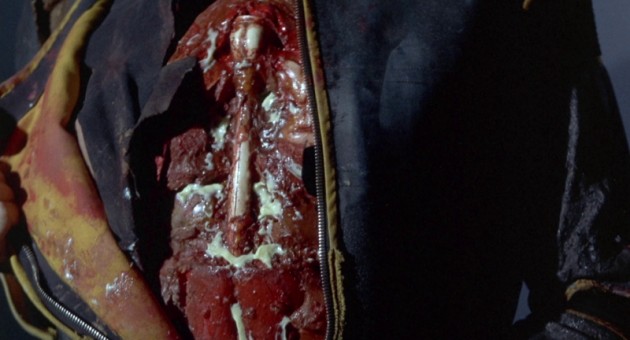 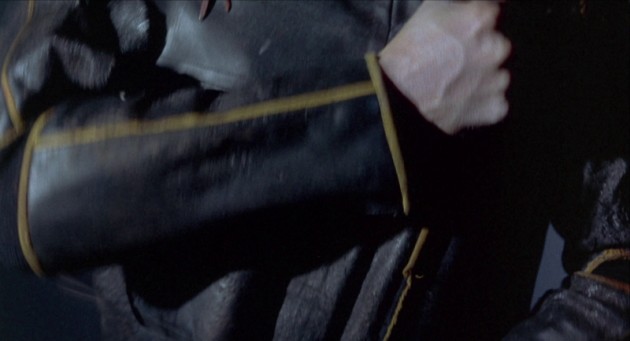 An image that haunts

Recent studies on cinephilia have acknowledged the potential significance a filmgoer may attribute to an element appearing on the screen. In a book chapter about John Ford , 1

Jacques Aumont concludes with a wonderful analysis of a gesture repeated by different characters in 3 Godfathers (1948). Throughout the film, they can be seen protecting others from the sunlight by holding their hat in the air. According to the French scholar, such simple action has a deep meaning. Indeed, it illustrates the profound altruism inhabiting Ford’s protagonists. A parallel can be made between Aumont’s take on Ford’s western and mine on _Planet of the Vampires. In both cases, a hand movement is interpreted as the hint of a character’s true nature. While similar, their connotation differs immensely. To put it simply, John Ford unveils, whereas Mario Bava hides.

As mentioned above, the possessed cosmonaut shrouds his bruise in order to appease his interlocutor. By doing so, he hopes to appear like something he’s not: a man rather than an extraterritorial being. Instead of displaying his inherent monstrosity, he attempts to maintain an illusion of normalcy. Bava’s figure of the outsider conforms to the strict dynamics of a peculiar environment. At first sight, Aura, the so-called Planet of the Vampires, appears like any lifeless world. If it wasn’t for a mysterious distress signal, the crew of the Argos spaceship would have probably never landed on it. Once they start to explore the eerie and beautiful landscape – once they start to look beneath the surface of things – they discover a frightful side of the cosmos that escapes human understanding.

Planet of the Vampires doesn’t captivate because of its title creatures. Fear in Bava’s film comes from the invisible, thanks to recurring allusions to a lost but once powerful civilization. Glimpses of a massive skeleton found in an abandoned shuttle reminds us how little we are in the vast of night. If space is the final frontier, we should not dare to cross it. Some territories must remain uncharted. Even a planet as peaceful looking as Aura can hide dangerous threats, hence the film ending on a bleak apocalyptical note.

A lot has already been written about the maestro’s influence on Ridley Scott’s Alien (1979). Weirdly enough, the latter barely comes to mind when I revisit the Italian production. It reminds me of another sci-fi classic with which it shares similar themes. In Fred M. Wilcox’s Forbidden Planet (1956), the extinct race of the Krell evokes the idea of a universe we cannot fully apprehend. Very little is known about beyond the traces of their scientific discoveries. Even their physical appearance remains a mystery. However, their advanced stage of technological development implies that they once possessed exclusive knowledges of our galaxy, knowledge we will never gain ourselves. Women and men must assume this gap and learn to live with a constant terror of the unknown. 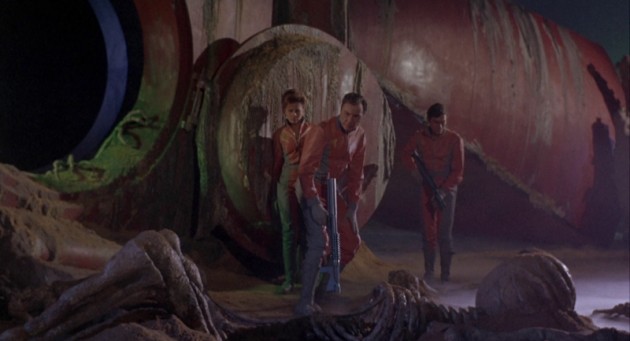 An influence on Alien

Such are the ideas that come to my mind when I sit down to watch Planet of the Vampires one more time. As I patiently wait for “my” scene to occur, I lose myself in the film’s poetic philosophy. Being alone in the dark, I almost feel like an astronaut travelling through the Milky Way. And when the evil ‘vampire’ finally covers his wounded body, I truly sense the power a single image can sometimes convey. I’m once again confronted with my fears, but they’re too hypnotic to look away.