Offscreen is closing out its 20th anniversary year with a special double issue dedicated to the return of Twin Peaks, alternately referred to as “Season 3,” “A Limited Series Event,” “Twin Peaks 2017,” and “The Return.” Whatever you want to call it, the series is moving on to its second life as Blu-Rays ship and the first official public screening has been announced at MoMA in New York for the first weekend in January (I’ve got my tickets!). Along with these new distribution formats will undoubtedly come a new wave of critical assessment of the show, and we are excited to join the dialogue.

For me, the experience of returning to Twin Peaks last summer was more or less indescribable. Or, at least, it left me at a loss for words. Unbecoming of someone who makes his living talking about films, but also a reminder of what got me into this business in the first place: a deep need to be moved, and the power of sound and images to move me. The Return delivered on this need unlike any moving images in recent memory, and I’m having trouble explaining why. Largely, I think, it’s a matter of simply being “on the bus,” as we call it in the Grateful Dead community. And like a Dead show, I fully understand how people peering in from the outside would be utterly baffled by the enthusiasm of its devotees. “What is this train wreck?” I can hear people asking. “Where is this endless noodling going? Why can’t they remember the words after 50 years on the road? Are they even playing a song right now?” But Deadheads themselves are far from uncritical in their love for the band; check out any Grateful Dead message board to witness the levels of vitriol to which we regularly subject the object of our desires. And to be sure, there is much to critique in The Return as well. Yet perhaps it is in the frustrations inherent to the relationship between expectation and delivery that we find our bliss, a highly subjective experience depending upon one’s relationship to the material going in. I believe in the value of leaving some things unsaid; not everything needs to be explained, particularly in the nebulous territory of the heart. Nevertheless, I feel compelled to offer some articulation of the experience that this show engendered, both personally and collectively, and so I have invited a few friends and colleagues to help me out here.

We begin with a preliminary haiku and accompanying photo set as a meditation on the act of watching, both within the world of the story and as spectators on the outside, setting the tone for the varied receptions chronicled across the issue. Then we dig in with two contrasting pieces illustrating the love/hate experience that permeated the mediasphere over the summer’s initial run. Sara Swain reveals her deep appreciation of Season 3 by beginning at the end to examine how the Twin Peaks universe is awakening into the circularity of self-awareness and, ultimately, opening itself up to the world outside of its own making. Then we take a U-turn with Ryan Diduck’s scathing critique of Lynch and Frost’s portrayal of women and people of colour across the series. He dislikes The Return on this point so much that he is compelled to rethink his prior admiration of all of Lynch’s work and officially renounces his fandom. Dramatic! Fans of the show will surely find much to disagree with here, but in the end Diduck’s argument expands well beyond these particular filmmakers to make a general call for a more pragmatic approach to the moving image in a time when there is no more room for ambiguity around the issue of women’s rights, onscreen or off.

Next we move into a triptych on music, sound, and technology. Kier-La Janisse, author of the uncompromising House of Psychotic Women, offers one possible response to Diduck’s critiques as she explores eerie parallels between the real life of Lynch collaborator Peter Ivers and Twin Peaks’ own Laura Palmer, casting new light on the idea of “martyrdom” within Lynch’s body of work by reconsidering his representation of the feminine beyond binary gender constructs. And she made a Peter Ivers mixtape to go with it! Good listening. Following Kier-La’s lead, I continue the theme of music and the Palmers with an excavation of Lynch’s recurring use of record players across his career and their weight in the new Twin Peaks. I pay particular attention to the role of the Palmers as the core of Season 3 amidst the chaos of its unraveling, illustrated by way of my own video love letter to Lynchian phonography. Mitchell Akiyama rounds out the sound technology thread with a meditation on telephones, time, and trauma across Twin Peaks as a whole, wiring his connective communications through a combination of autobiography and German media theory to reveal a highly personal yet critically informed take on the pathways that loss can forge in the lives of its victims.

Our next thread shifts to questions of narrative, genre, and influence in The Return. Our editor-in-chief Donato Totaro dives deep into the instantly infamous Part 8. While many have commented on this installment’s boldly experimental nature, Totaro looks at its relationship to the more popular genres of science fiction and the western, with a special emphasis on historical representations of the nuclear bomb. Next up, Joel Bocko, creator of the popular Journey Through Twin Peaks video essay series, argues convincingly for Mark Frost’s influence on season three through a close reading of the author’s thematic and structural preoccupations across his two recent companion books, The Secret History of Twin Peaks and The Final Dossier. Good reading! And Robert Peterson closes the thread out with an argument for considering the Twin Peaks Limited Series Event as TWO seasons (with two holiday specials). This is an extension of his previously published theory that the original series run can be convincingly broken up into four seasons of shorter 7 episode arcs, further evidence that the show was a harbinger of television to come.

To round out the issue, Nolan Boyd offers an autobiographical journey through his arrival in the Twin Peaks universe, tying his growing appreciation for the work of David Lynch to the problems of expectation and the harsh realities of a current viewing context impossibly removed from the days of the original series. In the end, the inability to return home is a recurring theme across this issue, each of our authors grappling with the ways in which the last 27 years have created our response to Twin Peaks as much as Lynch and Frost themselves. To the credit of the show’s authors, they not only anticipated the hole that time opened up between fans and the object of their fanaticism, they built it right into the heart of the show, defying commercial culture’s monetization of nostalgia and the endless quest for new beginnings for old properties. The soul of Twin Peaks: The Return is an old one, and for all its convolutions it wears its heart on its sleeve. And for that we are thankful, along with gracious permission from Cristiano Siqueira to use his remarkable print series for The Return throughout this issue. Glorious. (Guest editor, Randolph Jordan) 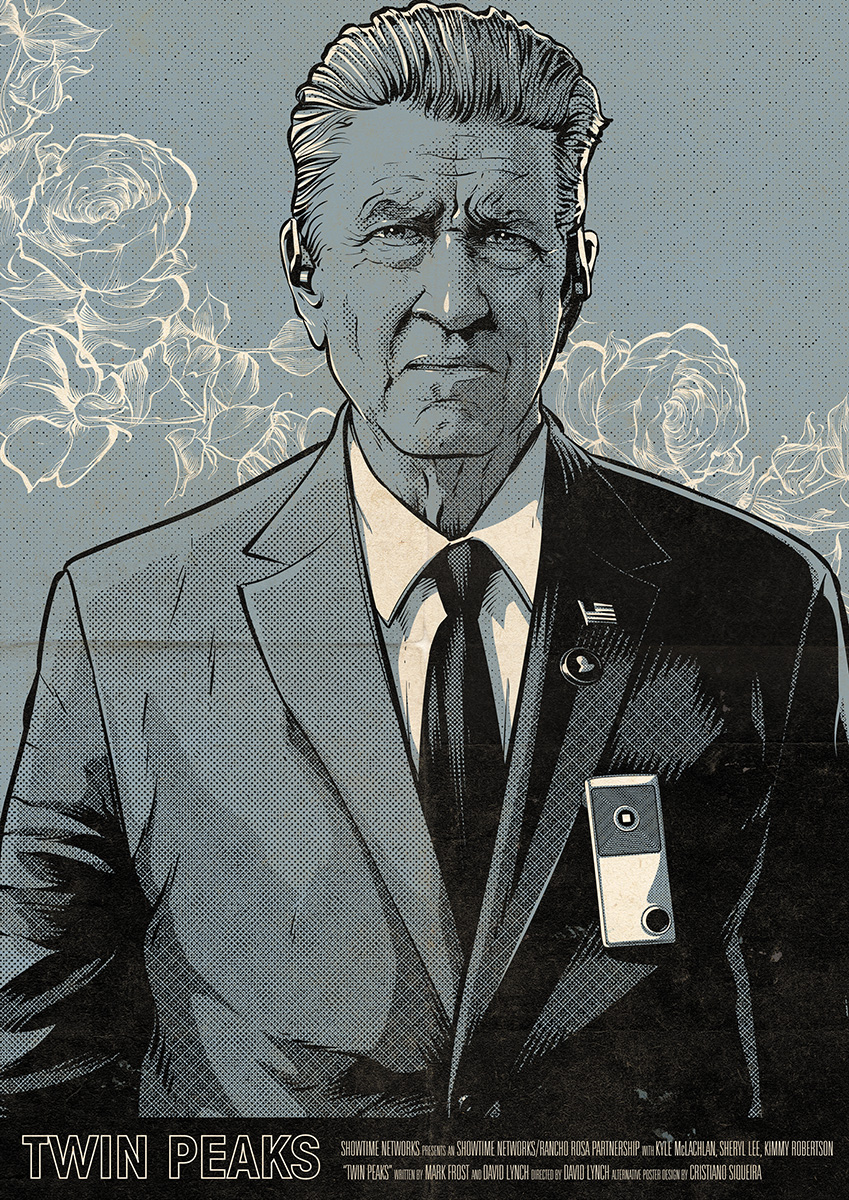