Get Coffee, Get Naked, & Die; or, Why I Prefer Pawn Stars to Twin Peaks: The Return 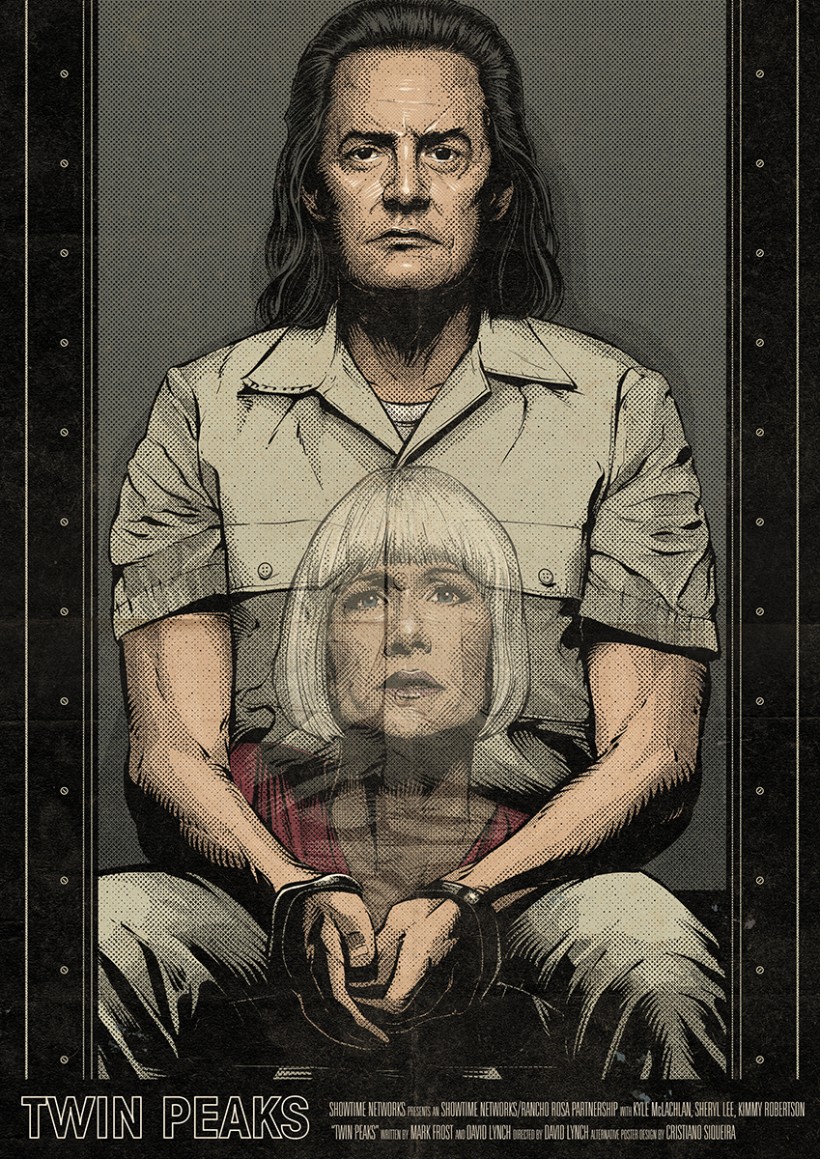 There are a number of similarities between the two small-screen sensations: both have enthusiastic fans who regularly swarm the shows’ filming locations; both are currently situated in Las Vegas; both have oddball walk-on characters (Clark County Museum Administrator Mark Hall-Patton, aka “The Beard of Knowledge,” or magician Murray SawChuck could easily pop up in a Twin Peaks episode); and both have the same number of letters in their titles — why, I can’t believe there is not a Subreddit page devoted to figuring out what all these coincidences mean!

There is one significant manner in which they differ, however: their respective treatment of women. Despite the pawnshop’s solely male company, and their frequently laddish and stereotypically macho American behaviour, Harrison and family always defer with the sincerest professional respect on matters of rare and antique books to resident bibliophile Rebecca Romney, whom they do not in any way treat like a sex object. Romney is Pawn Stars’ strong, smart, independent, female character. Twin Peaks, contrariwise, has a serious woman problem. 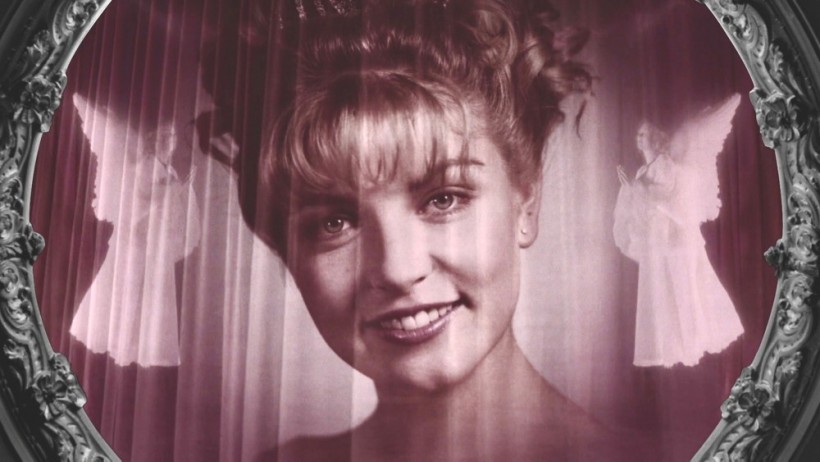 Let’s begin with the homecoming queen, Laura Palmer (Sheryl Lee), whose murder was the show’s inciting incident when Twin Peaks ran for two seasons in 1990-‘91 on ABC. Palmer, a cocaine-sniffing high school senior, and also a casual prostitute to the town’s perverts both high and low, is raped and murdered by her own father, Leland, the actor Ray Wise. But an evil spirit called Bob inhabited Leland, making him ambiguously an incestuous pederast and not at once. Such a disturbing conflation of plot elements had never been seen before on prime-time American television, and that, set against its contrasting small-town quirkiness — an ecosystem of one-armed men, one-eyed women, and log-carrying ladies; rife with pie-and-coffee jokes — earned Twin Peaks a cult following.

But lots of horrific things happened to women on the original series. Shelley Johnson endured regular beatings from her husband, Leo. As Bob, Leland also murdered Maddy Ferguson, Laura Palmer’s cousin. Annie Blackburn, sister of Double R Diner owner Norma Jennings, and FBI Agent Dale Cooper’s love interest, seemed as though she was written into the script only to be sacrificed at the end of the show’s run, to yet another raving madman — this time, rogue agent Windom Earle. “Sometimes you’ve got to be tough with these things,” remarks bit character Tim Pinkle, while installing a harness for the debilitated Leo in Season Two: “You’ve got to hit it hard. A machine is like a woman, we always say at the machine shop.” Although the line was delivered for laughs, there was nothing funny about it then, and even less today.

Which is what makes the overt contempt for women in Frost and Lynch’s return to Twin Peaks all the more despicable — so much so that it subsumes every other element of the show. I could honestly not care less about Kyle MacLachlan’s commitment to his characters, or Dean Hurley’s consummate sound design, or for that matter what the whole mystery means anymore, because I am too busy wondering why every female in the show has to be objectified, degraded, abused, or killed. I am not talking about one character; I repeat: every single female role in Twin Peaks: The Return is an abhorrent portrayal of women. Full stop.

Let’s look at the most egregious examples. 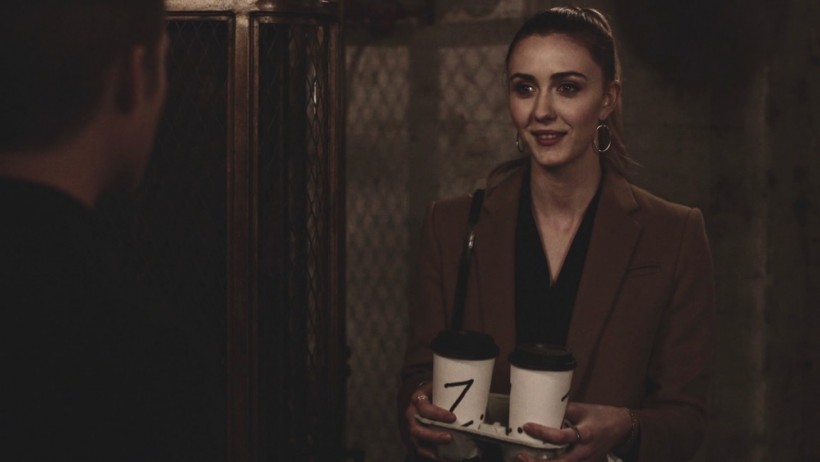 There’s Tracey, played in Episode One by Madeline Zima, who brings coffee to her boyfriend at work, gets naked, and promptly dies; there’s Nicole LaLiberte’s traitorous Darya, also Bad Cooper’s sex object, who lounges around on a motel bed in lingerie, and whom he later murders; there’s Doris Truman — Sherriff Frank Truman’s token bitch wife — played by a hysterical Candy Clark, otherwise the performance of the show; there’s Hailey Gates, whose devastatingly psychotic character is credited only as “drugged-out mother”; there’s Candie (Amy Shiels), Mandie (Andréa Leal), and Sandie (Giselle DaMier): literally a trio of sexualized female furniture; there’s Naomi Watts, who plays Janey-E Jones, a woman who can’t seem to tell the difference between her genuine husband and his Fake German Homer Simpson-esque “I-Am-A-New-Tie-Wearing” replacement;

there’s Kimmy Robertson, whose reprisal of her Lucy Brennan character is made to act even more colossally stupid in this series, like when she fails to grasp how mobile phones function; there’s Chrysta Bell, who portrays FBI Agent Tammy Preston, a character whose job description involves serving coffee, and wine, to Agents Cole and Rosenfield (as if the FBI conducts its most important business over glasses of Pinot Noir), being verbally abused by Diane, and enduring her creepy male director and co-star’s unwavering, lecherous gaze. 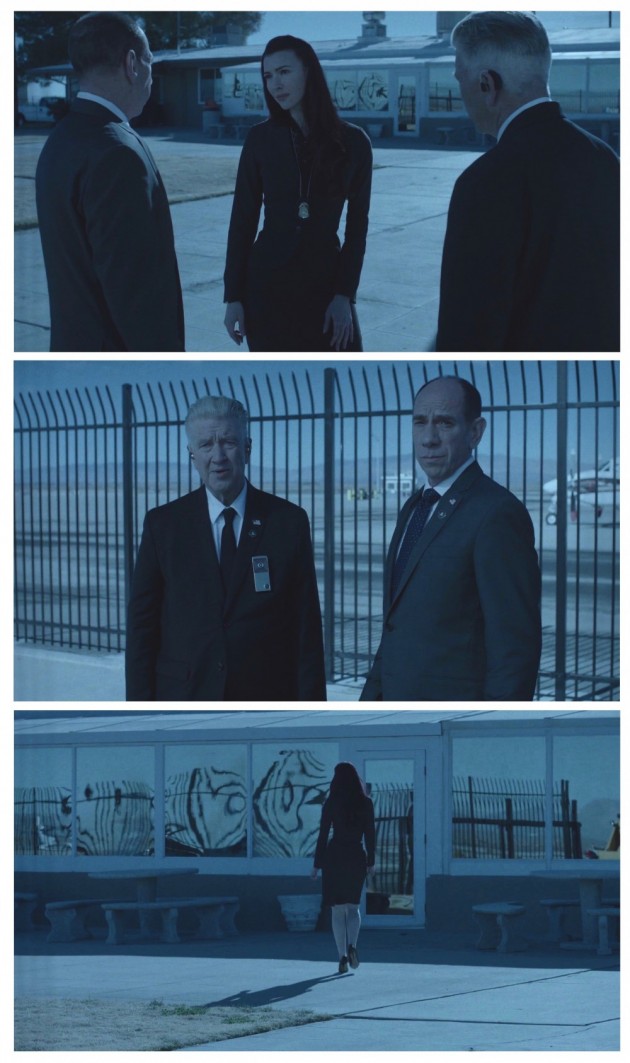 But these are far from the worst scenes.

In one shocking moment, Nadine Hurley tells her husband, Big Ed, that she has been “such a bitch” for standing in the way of his philandering with Norma Jennings. The dialogue sounds like a self-inflicted slap in the face, until you recall that Frost and Lynch wrote those words and stuffed them in her mouth. Among the more alarming episodes of the series, though, is Diane’s disclosure to Agents Cole, Rosenfield, and Preston that Cooper’s evil incarnation raped her. This traumatic event’s handling is undermined when it quickly becomes clear that, in fact, it is an evil incarnation of Diane who is making this claim. What we witness is a Twin Peaks-branded denial of the severity of sexual assault, a minimization of its prevalence in the workplace, and the implication that a wicked woman is ultimately to blame. That this plot thread is never followed up on makes it that much more difficult to forgive. 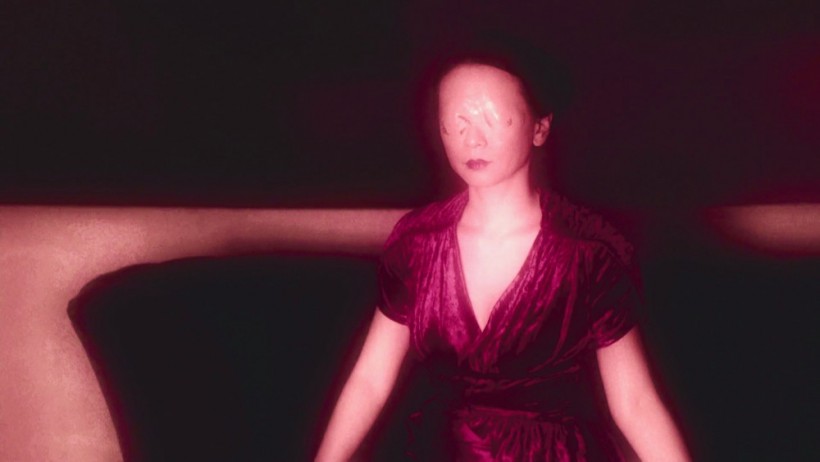 Twin Peaks doesn’t simply have a problem with women; more specifically, it has an even deeper issue with women of colour. Recall for example Josie Packard who, with her malapropisms, was essentially an Asian Balki Bartokomous, an exotic punch line. This time around, Asian women are particularly mistreated in the Twin Peaks microcosm. The role of the quasi-supernatural Naido, portrayed by the Japanese actress Nae, is one of two Asian female characters. She was spared the derogatory slant-eyed exemplar, instead having no eyes at all, and communicating not with language but through simian-sounding grunts and rumbles. In another uncomfortable tableaux at the Roadhouse, Ruby, played by the actress Charlyne Yi, gets manhandled out of her table by two brutes, and crawls screaming across the floor. Black women get the shaft, too: Nafessa Williams, who appears as the escort Jade, is rendered nude during her brief appearance, a doubly fetishized feminine object put in scene purely for scopophilic appeal. 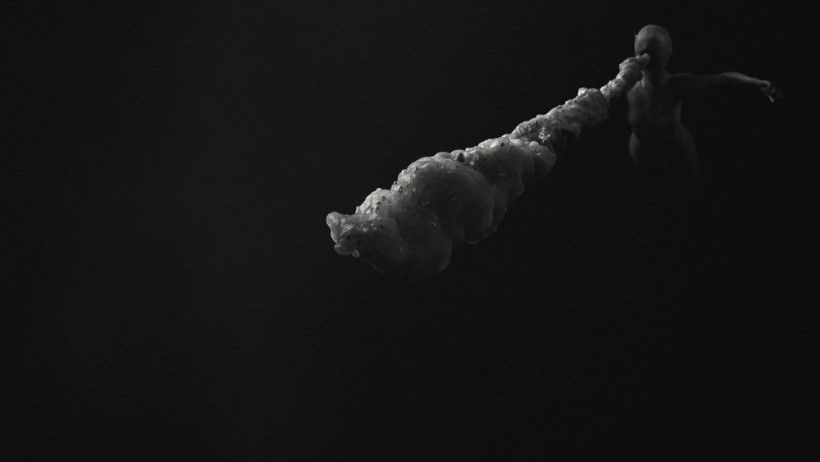 “Judy,” an offhanded non-sequiter spoken by David Bowie’s character, Phillip Jeffries, in the 1992 prequel film Fire Walk With Me, is now resuscitated as the mother of all evil in this latest season. One might ask, what’s in a name? Well, names have significance, and Judy is certainly no exception. Judy, the pet form of the proper female name Judith, originates from the Biblical Hebrew yĕhūḏī person from Judaea, meaning Jew. Thus, in Twin Peaks, the most evil presence in the entire universe is a Jewish woman. This is not interpretation; this is Judy’s dictionary definition. 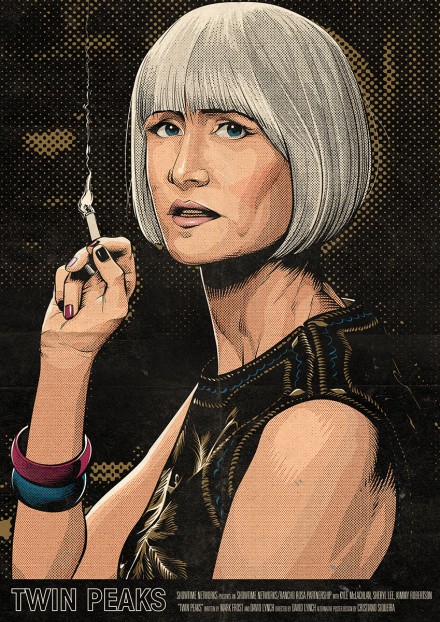 David Lynch has famously repeated that he doesn’t like to talk about the meaning of his films: “I don’t think about it so much as feel it,” Lynch explains rhapsodically in Pretty as a Picture, the 1997 documentary about his cinematic and artistic practice. He has never publically confirmed nor denied any reading of his work. Twenty years ago that might have sounded like an attempt to preserve some form of creative purity, of authenticity, and profound essence — bête comme un peintre, as Duchamp might have said. But in today’s cultural climate, this stance comes off more as willful ignorance, and worse, an overt articulation of symbolic violence against women.

Then, I remembered that David Lynch has always been cruel to women in his films. In interviews, Isabella Rossellini spoke harrowingly about how Lynch laughed throughout the shooting of her rape scenes with Dennis Hopper in Blue Velvet. Lynch pushed Patricia Arquette to the point of calling him the devil on the set of Lost Highway. Sheryl Lee has talked about the astonishing discomfort of being stripped naked and wrapped in plastic. Looking back now, Mulholland Drive was little more than soft-core lesbian pornography starring professional actresses. And Inland Empire is three hours of Lynch dragging Laura Dern through the muck. I cannot believe that this wasn’t clearer to me in all my years as a Lynch abider 1 — that he is in truth a racist, chauvinist, anti-Semitic swine. He can no longer just shrug his shoulders and claim that he follows his instincts, when the trail of his instincts so plainly traces a pattern of white male abuses of power in Hollywood.

We live in an era awash in dark, allegorical television series — post-apocalyptic and dystopian portrayals that are eerily similar enough to our own world to be truly chilling. Mr. Robot concerns the online domain of cyber security and vigilante hackerism. Black Mirror projects a reality one step removed from fascist, consumerist technocracy. Twin Peaks superficially seems like a rich tapestry waiting to be delicately unfolded by the careful critic — like Sam Stanley interpreting Lil’s dance — astutely dissecting its every frayed strand, its apparent references, its symbolism, and significance. This is a kind of mass schizophrenia made acceptable through the hypernormalization of narratives that are close enough to resemble daily life, yet conceptual enough to imply some sort of deeper importance. Lynch’s oeuvre, comprised almost entirely of abstraction, surrealist depictions, and paradoxical plotlines is arguably among the ripest for analysis in contemporary art history.

But what of real reality when we become obsessed with searching for meaning in imaginary, parallel narratives? We are approaching a point with this genre of television that the late cultural critic Mark Fisher termed “negative hallucination”: an inability to see what is really there, rather than fantasizing some psychedelic, dreamlike domain. We strain to manufacture meaning where there is none, yet fail to recognize the most blatant truths when they’re right in front of us.

In the wake of the rampant revelations about Harvey Weinstein, and widespread exploitation by the film industry’s most rich and powerful men, this latest iteration of Twin Peaks doesn’t play well. Killing women on screen is not the same thing as killing women in real life, to be sure. But portraying a woman’s killing still requires a woman to enact her own demise. A performance on screen is nonetheless a performance in the operative field, and one that works and worms its impressions onto the post-modern subconscious in disconcerting ways. During a time of fake news and fluid reality, do we really need another opaque window on the world, not so vaguely now hinting at wanton sexual violence? Allegories will not solve actual problems, and beholding ourselves in this funhouse mirror only reflects how distorted and terrifyingly near everything has become — that we are now wedged in a time when it is more comfortable to be lost in illusion than resolved in certainty.

This is why I would rather watch Pawn Stars, frankly. What I’m arguing for is a radical kind of pragmatism, a new and energetic momentum toward meaning-making. Pawn Stars almost pathologically makes sense; everything in the store has a story, and a price. It is a landscape that acknowledges historical inequities, but respects and champions a distributed field of agency. Women and men are equals. Weirdos are welcome. The formula works. Pawn Stars functions.

You may, as Rick Harrison says during the show’s opening, never know what’s going to walk through that door, but you know it will be something of purpose.

Ryan Alexander Diduck is an independent scholar and author. Along with Offscreen, his writing appears in Fact Magazine,, The Quietus, and The Wire. Diduck’s latest book is called Mad Skills: MIDI and Music Technology in the Twentieth Century. He lives in Montreal.