Movies About War and Hatred 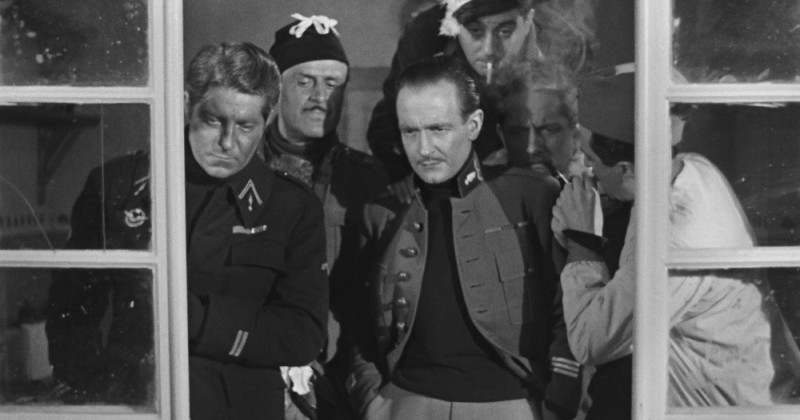 In Anna Fahr’s opening essay war sets the broad palette for a comparative analysis between two films that are unconventional in their treatment of war, La Grand Illusion and Bashu, the Little Stranger. In both cases the directors, Jean Renoir and Bahram Beizai, use disparate wars to engage in issues that are often at the fundamental core of why wars are fought: identity, race, ethnicity, class, Nationhood. With La Grand Illusion Renoir made one of the greatest ever war films, with very little actual battle scenes, preferring a war film that concentrated on the more positive aspects of humanity –friendship, loyalty, camaraderie, unity– rather than death and destruction. The next two essays deal with World War 2. On the surface, Volker Schlondorff’s Diplomatie and Larisa Shepitko’s The Ascent seem, at best, only tenuously connected. Most of Diplomatie takes place in an ornately furnished hotel room, which is used by Dietrich Von Choltitz, the commander of the Nazi forces occupying Paris as an office as he debates with the Swedish consul whether he should obey Hitler’s order to burn Paris to the ground. This is war as seen from the top, with its inherent violence and suffering remaining decorously off camera. The Ascent, by contrast, fully engages with the visceral suffering and brutality endured by those who do the actual fighting. It is very much war as seen from the very bottom. Yet, both films turn on the fact that war often involves personal moral choices. George Lellis and Hans-Bernhard Moeller’s analysis of Diplomatie raises the intriguing possibility that the film really has only one character, and that the Swedish consul is really a manifestation of his conscience. While Peter Wilshire does not make a similar claim concerning Shepitko’s tale of two Russian soldiers, Rybak and Sotnikov, who face the stark choice of collaborating with the Nazis who capture them or endure torture and execution, it is possible to see the film as a narrative where the everyman veteran soldier must choose between the fates of the Christ-like Sotnikov and the traitor-turned-Nazi interrogator Plotnov, external projections of his internal struggle. Malice, hatred and jealousy, at times unspecified, stands at the emotional core of Herman Melville’s novella Billy Budd, set during the turbulence of Napoleonic wars. The titular character, for reasons never made entirely clear, becomes a nemesis for the ship’s master-at-arms John Claggart. In this essay Daniel Garrett conducts a comparative analysis between Herman Melville’s last completed work, the novella Billy Budd, Sailor and the 1962 feature film by director/actor Peter Ustinov, Billy Budd. Melville’s novella was also an inspiration for Claire Denis’ 2000 film Beau Travail. Ustinov concentrates on the fascinating chemistry between sailor Billy Budd, played by the notoriously handsome Terence Stamp, and the master-at-arms John Claggart, played by Hollywood tough guy Robert Ryan. Though Stamp’s Budd is not at the symbolically seductive level of his character in Pier Paolo Pasolini’s Teroema, he stands out as beguiling figure who seems to attract in equal measure desire, attraction, jealousy and hatred. In The Hateful Eight Tarantino’s Post-Civil War revisionist western lives up to its title with its depiction of eight of the most untrustworthy characters ever put on screen. Tarantino’s cast hate their fellow man or woman for a host of reasons —skin color, National allegiance (South or North), out of an expression of justice, or simply as an impediment to profit— but with a common sense of twisted pleasure. (Donato Totaro, David Hanley, eds.)