For this month Offscreen offers a pot pourri of texts. New to Offscreen is Robert Robertson, who is currently doing doctoral work on Sergei Eisenstein and his ideas on audiovisual film. We are offered a glimpse of his research in his two-part essay on Eisenstein’s Que Viva Mexcio, with part one concentrating on Landscape and part two on Music. Daniel Garrett offers an in-depth analysis of the controversial feature from Eytan Fox Walk on Water, which tackles a volatile mix of subjects and themes that include Israeli nationalism, Israeli-Palestinian relations, terrorism, post-Holocaust Jewish-German relations, with a gay subtext mixed in. Sandor Lau provides a sobering and funny first-hand account as a participant in the Documart at the 2005 Australian International Documentary Conference. Rounding out the issue is Donato Totaro’s report on the 25th Anniversary edition of Syracuse’s Cinefest. 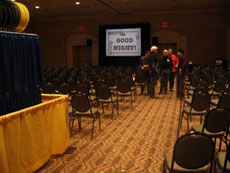