How to Project Success

In February, 2005 I go to Adelaide for the Australian International Documentary Conference. As luck would have it, I’m the youngest and least experienced producer selected to participate in Documart, the biggest documentary pitching forum in the region. I’m there to try to sell the idea for my new documentary in development, Squeegee Men, and do my best to hide the fact I am totally out of my depths here. The film follows the lives of traffic light window washers in four countries—think of it as Survivor: Poverty Line.

Perhaps the idea struck me so much because Survivor: Poverty Line will soon be the title of my autobiography if I do not get some funding for my film soon. After a distinguished academic career full of awards and scholarships, including one that brought me from America to New Zealand and put me through film school here, I’m discovering the marketplace has significantly fewer rewards for witty references to Kurosawa than the academy does.

Before the conference starts in earnest, there is a pitch training day where all the producers presenting projects get to have a practice run in front of a small audience (each other) and get tips from two trainers who know what this is all about. What it is about is theatersports. Twenty lucky producers are selected to talk for exactly seven minutes about why their film is the best thing since sliced bread, before an audience of some of the world’s most powerful commissioning editors (who select and fund what we see on TV) and hundreds of spectators.

Other people’s hands shake while they give their presentations; they fumble their words, and generally lose their mojo. I’ve been practicing though, and it comes off clean and the jokes hit the mark and I can feel it when they do. When I finish, the applause really lasts, and later, people tell me they even heard it down the hallway. The first thing the moderators say is that I should hire out my pitching skills to other people. Immediately afterwards, some colleagues try to get me to do just that.

At last year’s conference, I spent a good deal of time trying to hustle powerful people in hallways to convince them that my last film was the best thing since sliced bread. With absolutely no result. This year, as I’ve been granted one of only twenty pitching slots with microphones and AV presentations, I decide to go easy and just try to project success. Must concentrate very hard on projecting success. I watch others trying to hustle powerful people in hallways I notice that it doesn’t really reflect a special go-getter spirit. It reflects a needy desperation that commissioners can smell a mile away, and they stop listening even before you start talking.

After a day of this projecting success and wandering aimlessly trying to make conversation with crowds of strangers in a foreign country, I am very happy we have a special conference event—morning swim at the beach followed by breakfast. While it costs extra, this is not an indulgence—it’s an investment. A chance to get to connect with people in a human way—that can of course be exploited later to try to raise some money.

The swim in the first light of morning in clear, flat, warm water is wonderful. But when I ask about the showers, they just say, “You can shower in your room back at the Hilton.” I leave it at that, and try to think how I can project success covered in salt. There’s a large industrial sprinkler nearby with a huge circular arching jet doing a 10m circle, and a fast and powerful central jet whizzing around at light speed. The huge circular jet demands that I walk around with it in a 10m circle, and I quickly opt for the belly of the beast. The central jet looks quite powerful, but I can go for it or spend the day trying to impress people with my nappy seaweed hair. So I head in, only to realize that the inner jet is distributed by a 1.5m revolving steel wand the thickness of a lead pipe moving too fast to see. As the pipe whacks me in both my knees at 150km/hr, I collapse on the ground writhing in pain and chant to myself, “Project success! Project success!”

My pitching day has finally come. The pitch just before me is called Tasmanian Devil: The Fast and Furious Life of Errol Flynn. It happens to be starring one of the most successful, charismatic, attractive, and controversial stars in the history of Hollywood. The money people gobble it up and practically lay down their funding on the table.

I limp to the microphone, but deliver strong and true. The jokes hit home and people love the trailer. For the next day I become a minor celebrity with strangers cheering me on. If I had a dollar for everyone who says, “Dahling, loved your pitch, thought it was the best of the lot,” I would have my film funded by now. A German commissioner tells me if I spoke German, I could come be a presenter on his channel. But at the end of the day, the commissioners have a lot of questions, want to see more when it progresses further, and don’t cough up a single dollar for me. If you have ratings to bolster, advertisers to please, and a reputation at risk, are you going to put your money on Errol Flynn, or Squeegee Men? 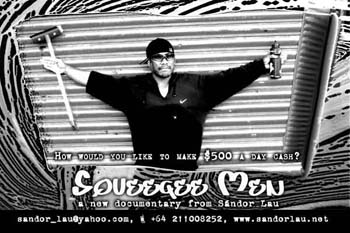 For only $20 extra, conference delegates can get a ten-movie pass to the Adelaide Film Festival, going on at the same time. While I could put this down as market research or professional development like the beach breakfast, those are all secondary, and my main reason for gorging myself on the film festival is self-indulgence. Being there reminds me why I am here to begin with. I did not get into documentaries so I could go to conferences or hustle commissioners in hallways or try to spend my days projecting success. I got into making documentaries because that’s what I love to do. And there are a handful of films here that are made by the same kind of people.

Jeremy Gilley took six years and shot a thousand hours of footage to make his film, Peace One Day, about his journey to establish one day of global ceasefire. Another film, I Like Killing Flies, tells the story of a corner diner in NY with a thousand made-from scratch dishes on the menu, which is forced to relocate after thirty-two years. It looks like it was shot on VHS, and the frame is often interrupted by the director’s hand holding up a tiny lapel microphone in his fingers, but it captures truth about humanity and the light of God. My favorite, though, is Tarnation, made by a gay man from Texas who tells the story of his life and his relationship with his mentally ill mother in brutal and loving detail through a lifetime of photographs and home videos. 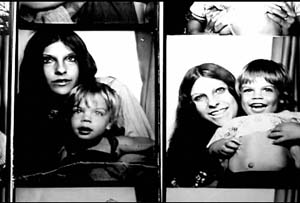 None of these ideas are the kind that could ever be explained in a proposal, and would certainly never be funded by any investor with half a brain. On paper if you put them up against Errol Flynn, you would pick the Tasmanian Devil every time. But they all carry a seed of truth and love that you cannot put into a budget and cannot justify to a suit.

I go to Sydney to see if I can find a squeegee man there for my movie, and I meet plenty, but not a single one I would like to spend even an hour with, let alone make a movie about. Since the first day in pitch training, I really knew, this idea of going around the world to four countries was a bid to get money, not something organic in the film. I have a star subject, a great idea, and everything I need to make it right here at home in New Zealand. And at 10pm, after a long trip and a long day, I book myself on the first flight home the next morning. I’ve never been homesick for New Zealand before.

The plane comes in over the West Coast and I can see the Kaipara Harbour and Piha out the window and I cry like a baby.