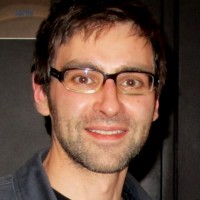 Nicolas Renaud has an academic background in Film and Sociology and is co-founder of Hors Champ (1996), an online film and media journal affiliated with Offscreen. He has published numerous articles on cinema, art and media, in Hors Champ and in other publications. In conjunction with Hors Champ, Renaud organized special screenings and lectures in collaboration with the Cinemathèque québécoise, including an event with Stan Brakhage in 2001. Renaud instructs camera and Super 8 film workshops at Main Film (an independent film center/co-op in Montreal). Since 1998 he is also a practising artist who has made video installations and short films that have been exhibited in Canada and Europe.