Simon van der Borgh opens, in his stentorian voice, with a story about his own acting teacher, a gay Jewish Hungarian by the name of Rudy Shelly. Who says the essence of acting is this: Imachine you take a lemon and place it betveen your buttocks. Now sqveeze ze lemon. I know this is going to be interesting. 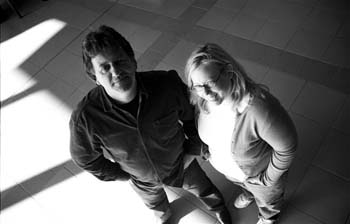 For five years now, the British Council and Fulbright New Zealand have teamed up to create Masterclass! workshops pairing prominent Brits and Americans to share their expertise, stories, and worldviews with New Zealand. Today’s occasion in Auckland has packed the auditorium with over a hundred practicing and aspiring short filmmakers.

As much as an exercise in filmmaking, the workshops are an illustration of the British and American approaches to art and life. With only four days to put us through the world’s fastest film school, Simon van der Borgh cuts directly from the lemon to the chase.

Simon is all about story, a complex intersection of character storyteller and audience, and one he knows very well. All the way back to Aristotle, the three unities (time, place, action) and the five elements (exposition, conflict, story, plot, narrative). With frightening accuracy, he can describe the composition of any film in a graph of the three-act structure—rising and falling action, a hook, two turning points, a twist and a resolution. With the audience’s minds still boggling over what it all means, he adds that in storytelling, “Everyone but Americans has a fear of being understood.”

Which is really no problem for Kim Adelman, who specializes in the other side of Simon’s coin, taking words on paper and making them pictures on a screen. She launched the Fox Movie Channel’s short film programme in 1996 and produced nineteen shorts there before going on to put together a series of short film compilations for Warner Home Video. In the interests of both being understood and cutting to the chase, she is a great lover of top ten lists.

Over the course of the workshop she probably gives over ten of them, so here’s an anthology:

1. Make a film people want to see
2. You are a talented filmmaker and people are lucky to be working with you.
3. All filmmakers lie.
4. You are not curing cancer—have fun .
5. Know which things to obsess over (no one will ever say, “oh, the acting was bad but the props were good.”
6. Never say “we’ll fix it in post.”
7. Listen to honest critiques.
8. Pick your people wisely.
9. You can make a film for very little money and go far.
10. Wear a baseball cap. 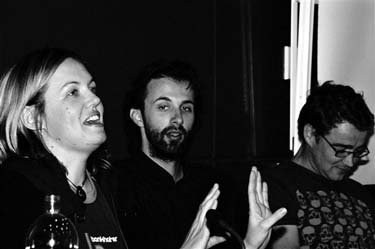 While this is a rare occasion to hear so many experts in one place, some valuable resources at the workshops are available almost anywhere. Robert Rodriguez includes a 10-Minute film school special feature on his DVDs of El Mariachi, Desperado, and Once Upon a Time in Mexico. Another excellent video resource for those on both sides of the camera is Michael Caine: Acting In Film.

Along with videos you can get anywhere, Simon and Kim bring a treasure trove of short films available almost nowhere, which is a reality of the market, not their quality. From Britain: Gas Man, Last Post, Nits, It’s Not You It’s Me, Inside Out and DIY-Hard. From the US: George Lucas in Love, The Spirit of Christmas (which Kim claims is the most successful short ever—it spun into South Park), Billy’s Balloon, Telling Lies, I’m on Fire and Debs.

While Kim and Simon are here to inspire us, they are not here to delude us. Only a handful of the finest shorts in the world ever make their budget back, and the only audiences they’ll ever have are film festivals, the internet, and if you’re very lucky, cable and European TV. They’re a great learning exercise, a lot of fun, and make wonderful calling cards. But as a career, they’re about as sustainable as fossil fuels. If you want to eat, you need to think features.

“Writer’s block is bullshit,” Simon says. “Ever hear of plumber’s block? Writing is a muscle.” In another of his wonderful diagrams, Simon illustrates the character’s journey with two converging horizontal lines (>). Walking along the top line is the protagonist, and mirrored under the bottom line is a shadow, the antagonist. As the story moves forward, so do the shadows, until they join each other at the end. To give a Star Wars example, at first Luke’s enemy is distant and nebulous, the Dark Side. It gets closer—The Empire. And closer—Darth Vader. And finally where the V comes together, it’s within himself.

Filmmakers too, can be their own worst enemies, and in the interest of fighting the Dark Side, and getting that feature made, Simon has his own equally practical top ten list:

1. Stop making excuses.
2. Write a good script.
3. Be prepared to let someone else direct your good script (you can direct your next one).
4. Go to Hollywood, go to New York.
5. Buy a triband cell phone (they work in all countries)
6. Get an agent.
7. But remember your agent doesn’t get you work, you do.
8. No one sells a script better than the writer
9. Get a decent business card
10. Have your pitch ready in the following versions: 10min, 5min, 2min, 20sec.

The twenty-second version is for when you run into Harvey Weinstein in the elevator, which by a stroke of very good luck, Simon happened to do. His script is about the friendship between a little girl and Napoleon on Elba. “Americans have no sense of history but their own,” Simon says, so he pitches it like this: Osama bin Laden makes friends with Shirley Temple in Hawaii. Boney and Betsy is currently in pre-production.

No one can teach you to be a filmmaker, and certainly not in four days. But like in any good scene, Simon and Kim cut to the chase, come in late, leave early, and leave the audience wanting more. Talking with the other filmmakers, everyone is ready to go out and make something now by any means necessary, and as I walk out, I notice that in my excitement, I have squeezed the lemon.

The Ultimate Filmmaker’s Guide to Short Films: Making It Big in Shorts by Kim Adelman

put your film online and get feedback