Released by Image-Entertainment in conjunction with the American Cinematheque

The second Wakamatsu film released by Image Entertainment and the American Cinematheque is Go, Go Second Time Virgin, which was shot in a remarkable four days, and released three years before Ecstasy of the Angels. Although it has all of the pink film elements (sadomasochism, sex, violence) and some stylistic similarities to the later film (mix of color/black & white, 2.35 cinemascope, use of high and overhead angles), Go, Go Second Time Virgin contains a more linear and coherent narrative structure, making it perhaps an easier pill to swallow than the more experimental Ecstasy of the Angels. In other respects, this may be more difficult to watch for some viewers because of the harrowing sense of emotional anguish lived by the film’s two lead characters, teenagers Poppo (Mimi Kozakura) and Tsukio (Michio Akiyama).

The film begins with four male teens gang raping the 17-year old Poppo up on the rooftop of a seven floor apartment building. A fifth male teenager, Tsukio, remains a passive participant, viewing the proceedings but not intervening. The next morning the two begin a curious love-hate bond based on their mutual self-loathing and horrible common experiences. During the course of the short feature we learn that they both have suicidal tendencies, have been sexually abused, and live alone because their respective working class parents committed suicide. Wakamatsu frames Poppo on the morning after this wholly de-eroticized rape from his favorite vantage, looking down up from the skies. The shot cuts to an overhead close-up and dollies in closer into her eyes, until the image turns completely soft and the shot cuts to a color shot of blue ocean waves. We are into a memory flashback, but the idyllic scenario is soon shattered when we see a younger Poppo chased down and raped by two men. Wakamatsu uses to powerful effect a long take, for the first of many times, when he cuts during the rape to an off-center close-up of Poppo with the calm, indifferent ocean waves careening in the background. 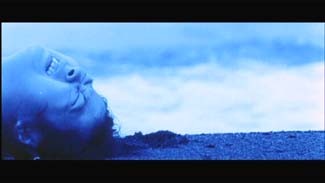 Poppo wakes up from her memory flash reciting the first of many poetic lines uttered by both characters: “On the morning of August 8th, I was raped again. I bled.” The morning also reveals that her rapists are still present on the rooftop. When Poppo begins to yell at them, daring them to “kill her, kill her,” one of them rapes her a second time. Although Wakamatsu plays within the boundaries of the pink film, there are always brief moments that suggest a resistance to the genre’s misogynist strains. This moment comes during Poppo’s single moment of defiance. After being raped a second time (on the rooftop), she walks forward toward a backward moving, low angle camera, with the mild wind blowing against her hair. On the soundtrack we hear a woman singing “Sometimes I Feel Like a Motherless Child.” Poppo begins to recount her unfortunate past, but it is clear by the way she is walking and where she is looking, that she is not addressing Tsukio or any on screen character, but the audience, which for a Pink film in would be predominantly male: “My mother was gang raped, and then she gave birth to me. Are the tears we two shed when raped, the tears women shed? What tears? What sadness? I am not a woman. I’m not sad, not sad at all. I don’t cry. I’m never sad. I…I’m not at all sad…..FUCK YOU..FUCK YOU.” In its defiance this shot recalls the brazen close-up of a down but not out female character at the end of Kenji Mizoguchi’s Osaka Elegy (1936). 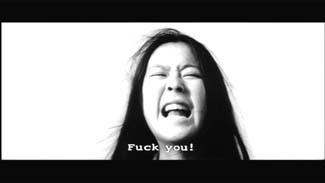 About halfway into the film we learn about Tsukio’s own dark recent past in the film’s most striking use of black and white to color transition. Tsukio, who lives in the building, takes Poppo to his fifth floor apartment, where the contents of one room simultaneously shock both Poppo and us. Once the door is opened, the shot cuts to a close-up of Poppo’s shocked expression, then to a color shot of what she sees: four nude people lying dead in their own pool of blood. Like in Ecstasy of Angels, Wakamatsu treats violence like a stylized installation art piece. In this case the blue concrete floors forming a stark contrast to the thick, paint-like red blood. We learn from Tsukio and color flashback inserts the circumstances leading to the murders. The murder victims were two adult couples who would rent a room and force Tsukio to join them in kinky group sex (in one shot we see a woman urinate on Tsukio). In Tsukio’s own words and moral logic, he did not like killing them, but they deserved their gorey end for “perverting him.” 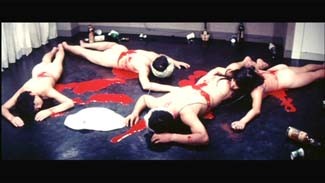 The rest of the film becomes, quite literally, an alternating teenage expression of the sex (Eros) and death (Thanatos) drives, with sex continually made ugly and death the ultimate conqueror. Poppo incessantly pleads with Tsukio’s to kill her, to end her misery and loneliness, something which Tsukio can not bring himself to do. Instead he turns on the teens, who have now returned to the rooftop accompanied by two other girls, a male-female coupling which matches the coupling seen in the brief cut backs to the original murder. Only now the killing, no longer in the hyper non-real past of color, is bleak and unrelenting. Tsukio once again allows them to abuse Poppo, only this time he returns knife in hand, and viciously stalks and murders them one by one. The scene is played with some black humor, by having the nude, disconsolate Poppo complain to Tsukio because he is killing them but won’t kill her! MAJOR SPOILER. The film concludes with the two fated characters each in turn jumping to their inevitable (liberating?) suicidal deaths. 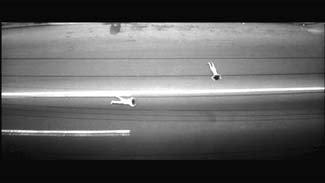 The miniscule shooting schedule and budget of Go, Go Second Time Virgin no doubt accounts for its almost exclusive single rooftop location, but Wakamatsu sacrifices little in terms of aesthetics, using both the location and the cinemascope frame to increase the character’s psychological expression. For example, the way Wakamatsu uses the high angle shot to frame them in vast spaces that render their sense of isolation, or the way he shoots them tightly or through framing devices to augment the sense of hopelessness and ‘huis clos.’