A father and his daughter sit facing each other with a single raw potato in front of each of them. The father tries to eat his “meal,” and urges his daughter to do the same. What other choice is there if they want to live? The over two hours of running time it took to reach this point details the stripping away of everything that had made their previous subsistence level life possible. Their horse gets sick, the well dries up, the gas lamps no longer give light, strong winds make it nearly impossible to step outside, and finally the sun doesn’t rise and the end of the film is engulfed in darkness. Title cards that announce each segment running from “The First Day” to “The Sixth Day” deliberately evoke the Creation myth, making the extinguishing of the means of life, like the non-stop howling of the wind, signs of the apocalypse. Under the circumstances, it becomes a reasonable question to ask whether there is any point in eating that raw potato to stay alive, and this makes The Turin Horse among the bleakest meditations on the human condition ever committed to celluloid.

The film’s director is Béla Tarr, the Hungarian festival favourite known for lengthy films which feature extensive use of long takes and an often memorably imaginative and expressive moving camera. His best known previous works are the 450 minute long Sátántangó (1995) and Werckmeister Harmonies (2001), which clocks in at a relatively modest 150 minutes, very close to the running time of his latest film. The Turin Horse is currently on the festival circuit, and Tarr’s international critical reputation made the screening one of the most anticipated at Montreal’s 2011 Festival du Nouveau Cinéma.

The film begins with a tracking shot that lasts over five minutes of an old man with a paralyzed arm in a rickety cart being dragged by the world’s saddest looking horse through a fierce windstorm. Almost the entire balance of the film consists of the repeated daily rituals of this old man and his daughter, which consist of them performing tasks such as chopping wood, cleaning the stable and preparing meals of single boiled potatoes, a series of chores that become increasingly difficult to perform as adversity mounts. When not doing chores, they stare blankly out the window at the harsh and empty landscape. The details of their days are related in a series of long takes which attempt to give the audience an idea of their lives as experienced in real time. The film’s title comes from a possibly apocryphal story of Nietzsche going mad after seeing a horse being beaten. A narrator relates this at the beginning of the film, and remarks “We do not know what happened to the horse.” It becomes an open question whether there is all that much difference between the suffering horse who is beaten by the old man and the old man and his daughter who are beaten by life, or perhaps God. Since the crisis of the father and daughter’s survival begins when the horse they rely on gets sick and refuses to eat, it almost seems that the most important distinction is that the horse has tired of eating the raw potato. 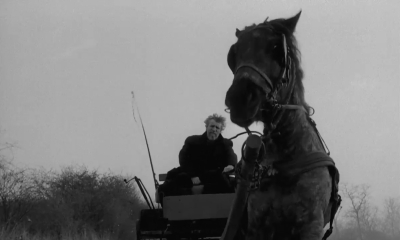 All of this, which could almost be summed up as nothing happening very slowly and miserably, could have been deadly dull, but somehow Tarr makes it a mesmerizing experience. Just as the father and daughter are progressively deprived of everything, Tarr has stripped down his film style to the minimum and beyond. There are only 30 shots during the film’s 146 minutes and Tarr’s characteristic flashy tracking shots and moments of black humour are almost entirely missing. The dirge-like music consists of a handful of variations on a simple theme, and there is almost no dialogue. But Tarr knows exactly where to place his camera for maximum impact and displays a knack for moving it as much as it has to move and no more for achieving the precise effect he is aiming for. Once a viewer is caught up in the story, it is impossible to look away. It is admittedly odd that a film carefully documenting unrelieved dreariness should produce the contradictory effect of creating an hypnotic experience, but the sheer bravado of its mastery of film technique and unrelenting attempt to express the despair and horror Tarr sees at the heart of human existence is somehow anything but dreary. In its own way, watching it is an exhilarating experience. Considering the content, this may be the film’s most interesting aspect.

Of course, not everybody will be caught up in it. At the screening I attended there were quite a few people who walked out. This is in spite of it being a festival screening, and therefore at least theoretically having an audience more tolerant toward challenging material and more likely to be aware of the type of films Béla Tarr makes. However, if they could not sit through the film in this setting, it is unlikely they could ever sit through it, because the festival provided the perfect showcase. The film was screened at the Imperial Cinema, the last surviving of Montreal’s grand movie palaces, with its 700 plus seats completely sold out and the beautiful 35mm print projected on to a big screen that emphasizes the intricate details of Tarr’s compositions and the otherworldly gloss of its crisp black and white photography, making the onscreen misery somehow pleasing to the eye. Watching a Béla Tarr film at home can be difficult, because of the many handy distractions that can make the pause button so inviting, and because it is simply easier in a dark cinema as part of a crowd, particularly a respectfully silent festival crowd, to enter the trance-like state required for full enjoyment of his films. Because of the rigorous limits to its technique, this is particularly true of The Turin Horse. Of course, there is another layer of irony here, since the original designers of the cinema that provides this ideal venue never intended that it show art films. Built in 1913 as a vaudeville theatre, the Imperial has shown Hollywood films since the 1930s. Indeed, when it was restored and renovated in 1981, it was specifically to serve as a showcase for Hollywood blockbusters such as its grand re-opening film, Raiders of the Lost Ark. That it only survives as a film festival venue because of philanthropy and government sponsorship is a sign of how moviegoing has changed.

At an academic conference last Fall, film historian Thomas Elsaesser commented on these changes and the seeming perverseness of Tarr making a film that can only be appreciated properly when seen in a format that is rapidly disappearing, suggesting that it is a protest against the way movies are increasingly being shown. So while The Turin Horse is concerned with the bleakness of everyday life, it may well be as much about the end of cinema as about the end of the world. In this light, Tarr’s declaration that this film will be his last even has a certain logic to it, even if watching it makes one hope that he has a few films left in him after all.