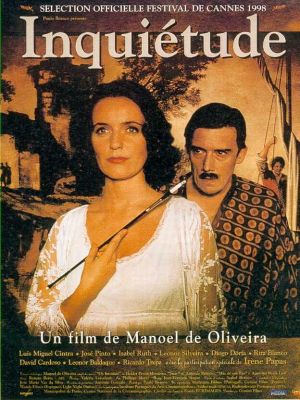 Even within the already established challenges of Manoel de Oliveira’s body of work, Inquietude stands out for its unique difficulty. For the sake of convenience and an initial direct access, it’s easy enough to allot a general theme to most of the other films (e.g. Vale Abraão is about beauty, O Convento is about evil, La Lettre is about love, etc.). This at least allows for some means of approach, but Inquietude defies any such orderly schematic. What is it about finally? One is tempted to say death or immortality or notions of the eternal but somehow even these broad terms do not seem adequate enough. Finally, it really must be that titular disquiet, an existential unease or angst. But this is even more vague than usual, given that it describes a foundational condition upon which everything else is built or develops. It’s a self-awareness that gives rise to poetry, philosophy, the specific conditions of human cognition itself (the comprehension of immortality as an idealized quality, for example). The synthesis brought about by this shifting set of contexts and active agents produces a surfeit of meaning. One character demonstrates the effect of that supercharge of ambiguity in noting on a friend’s lover: “She is dead. In your mind, she is not the same.”

Narratively and structurally the film is a triptych. The three stories it contains are laid out in an interwoven, interdependent form. The first is a rather confined, even claustrophobic, extended dialogue between an aged, successful scientist father and his almost equally acclaimed middle aged son. The discussion centers around insuring a lasting legacy (i.e. immortality) and the means by which to secure it (i.e. suicide at the peak of one’s renown). This broad comedy verges often on farce and, once it pitches irretrievably over the edge, is revealed as a theater performance witnessed by characters from the second story, one set within the upper tier environment of Portuguese society in what would appear to be the early part of the twentieth century. In this section, the unnamed male lead is troubled by his love for a courtesan, Suzy. Eventually he is comforted by a friend who tells him a mythic folk tale which in turn is also told to us cinematically. In it, a dissatisfied young peasant girl in an isolated rural area assumes the identity of Mother of the River from another woman, virtually immortal, who has grown dissatisfied herself with the role. The transitions between these stories could not be more readily apparent and clearly administered. What the implication of their association is cannot be so easily assessed. As is remarked by the friend in the second story: “There’s a connection and yet none at all.”

Immortality as an intellectual concept is depicted as having special appeal to knowledge driven seekers and those drawn to knowledge as valuable commodity in and of itself; immortality is seen then by them as a validation of stature, of accomplishment. Any possible broader cosmological meanings are reduced, diminished. Disquiet or anxiety is a product of neuroses–the fixation on immortality as necessity is product of a heightened sense of self-importance and a narcissistic, limited view, one crippled by a lack of irony. Demands of a civilized society perhaps dictate the desire for respect and allow respect to act as validation of lasting worth, an entry to the eternal.

More than ever in Oliveira’s cinema there is an emphasis on the artifacts of that civilized society, the art it produces as representative of its established cultural definitions and attitudes. The emphasis exists almost to a suffocating degree, despite the inherent beauty of these artifacts; it is suffocation by ideal beauty. Art and artifacts are cultural definitions frozen and set, not releasing that grip, giving up nothing. They intimidate for that reason, too, especially given what they imply about the price of immortality–in this case the intended immortalizing of concepts or values. Aging and change is positioned versus stasis, a captured essence frozen in time, an idealized state. The muse of the father and son’s fantasized dreams is also aging, though her photo, the only such likeness amongst their plentiful objects d’art, captures her too in a frozen timelessness. The objects, in fact, can be said to bear witness to the flailing efforts of their owners to be like unto them. In such idealism there is a violence, even if only that of condescension. The lead of the second story continually laments “poor Suzy,” for instance. This prevents any acknowledgment of the way in which she is claimed fully for his own narrative, subordinated or subdued as deemed fitting. Suzy herself is an extension of that idealizing impulse. She is artifice personified, surrounded by and existing within it (often positioned as high relief to a backdrop mural or a mirroring posed painting); however, much the same can be said for the rest of the characters as well (“They are trained to perform as we are to live in society”). Fisalina, in the final fable section, is conjoined with or recognized as part of eternal elements or enduring properties. Aesthetics is acknowledged here as a constitutive expressive element of all. 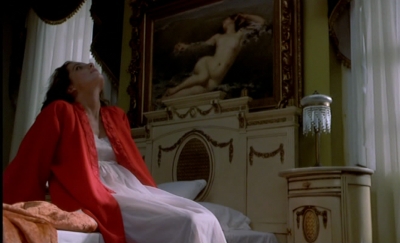 For his less pliable idealist project, Suzy’s admirer enlists the great Romantic Realist Eça de Queiroz at one point: “He’d make something tremendous of her, human, fascinating”. His seemingly more perceptive friend complicates this lofty goal: “Don’t you think it would be superficial? Worldly and limited?” The first man pays little heed, going on to rhapsodize over Suzy and her companion: “They contain condensed stoicism, a heroic strain that sits uneasily with their life as courtesans. They are the spiritual heirs of Marcus Aurelius.” His attempts to immortalize her pivot on his ability to understand and define her as thoroughly as he has done to himself. This idealism comes to be thwarted by an irreducible complexity on her part, a fusion of seemingly contradictory opposites: the irony is of definition as necessary but self-limiting. Suzy exceeds that idealist simplification as does Fisalina. Suzy’s male admirer does not. He positions himself as eternally lovelorn–the embodied expression of tragically romantic longing. However, the irony here is that his romantic angst, by being so thoroughly defined, so thoroughly lived, is immortalized as complete. Her death, if that is indeed what happens, provides the pretext. In death she attains her immortality by becoming most capable of being idealized.

There is careful construction of rhyming dialogues or statements throughout Inquietude that work to expand the reach and resonance of its implications. The repeated declaration of the male lead in the second story that every detail is “a small thing” echoes Suzy’s own similar insistence on the significance of her experiences. This is met in response by the lead’s friend who says, “A detail may mean as much to me as life itself to others.” There is also a bookending pair of statements made by the lead. “Pain is a harsh mistress that needs beating, “ eventually becomes “Now my mistress is the pain I feel.” Immortality is understood in a multitude of ways throughout. The first story may present it as enduring memory but the flux of meaning allows for it to be understood as ensured only by death (“We’ve seen how death brings immortality.” “True, it brings eternity.”). Perhaps the inquietude is brought on by this shifting sea of meaning that encompasses all that is possible to imagine and more beside. The definitive conclusion here would seem to be “Life is a mystery which solves everything in the end.”

The aesthetic conditions of performance and storytelling are emphatically pronounced as integral to understanding. The first story stages its consideration of immortality as a demonstration of a presiding principal focus. The fundamental aspect for all further refinement of comprehension precedes any separation of comprehension into specific disciplines (arts, sciences, etc.). The inquietude is sourced in and the source of concepts of the world or, more specifically, mechanisms of conceiving the world, particular cognitive strategies produced by and proceeding from particular cognitive capacities. The final story evidences that by invoking Hesoid’s Homeric era epic poem Theogonis as example of a foundational world making myth. This myth emphasizes eternal, absolute potentiality and that what is made explicit in the process of differentiation or definition is implicit prior to this (a theme shared with Oliveira’s O Convento, adapted from a work by his frequent collaborator Agustina Bessa-Luís from whom this piece originates as well). Part of the point of including this third story would seem to be to force a reconciliation to that notion; that the idea of the elemental is poetic by nature and that this was the presiding mode of meaning making and comprehension at a particular point in time. It is a kind of unavoidable source idealism that has to be continually addressed, re-examined, overturned and reconceived. These ideas are constant in Oliveira’s work (and Bessa-Luís’s as well–it’s one of the things which bonds them) and they provide their own sort of definition. An acknowledgment of what endures then and how is only proper to it: “The guardians of the human spirit need replacing too. And the waters of wisdom will be inhabited by new masters.”

As ever in Oliveira, the material aspect is emphasized in tandem with the conceptual. The literal component elements that make up that which is aestheticized are seen in constant tension with less obviously aestheticized images or material. The civilized aesthetics of the ornate and resplendent are eventually put in apparent opposition to the pared down, seemingly spare depiction of the primitive world in the fable, but the fable itself features equally sumptuous lighting and equally rigorous compositions; as cinema it is at least as aesthetically rich: still visually lush and still just as much an artifice. The artifacts or artifice of civilization’s particular design–the shape it takes in reflection of an acknowledged reality –can, in their very rarified refinement, encompass a vast array of specific detailed ideas and has the capacity to do so. The final fable, The Mother of a River, addresses the recognized details of reality differently, with less grandeur or ostentatiousness than the preceding, framing story. Pared to its mythic essence, it is an embodiment of a cultural form or mode of understanding, the kind represented as decor in the earlier more civilized sections of the film. It is an idealism reckoned with for all it contains and does not clearly define. That it is surrounded in its telling by the literalized artifice of the preceding story only adds to the irony. The fable in its own broadly enduring terms, suggests that to be human and alert/self-aware is to be the host of a distinctive endemic anxiety, a perpetual sense of driving inquisitiveness and an unavoidably defining inquietude.