Tully, or The First Rule of Caring Club Is…

For Psycho (1960), Hitchcock went to great lengths to prevent spoiling the plot twist: withholding scenes of the script from actors, buying up copies of the source novel, and insisting that patrons who arrived after the start would not be admitted. Of course his insistence does alert the audience that a big reveal is coming. By contrast, the promotions for Tully hide its secret too well. In the trailer Jason Reitman and Diablo Cody’s latest film comes across as a straightforward postpartum dramedy starring Charlize Theron. But the psychological twist opens a fascinating critical dimension to the film. Consider yourself alerted.

Theron plays Marlo, a middle class mom pregnant with kid three at forty. Her son has special needs, her husband is too stressed by work to help, and her daughter helplessly mousy. The baby sends her into a tailspin, when her rich brother gifts her a solution—a night nanny named Tully (Mackenzie Davis). Marlo awakes to a spotless house, with cupcakes baked for class treats, and she suddenly becomes the charming supermom to which she had aspired. Tully also becomes a friend who appreciates her midlife struggle, even helping to rekindle the conjugal bedroom with some kinky fun. The carefree twenty-something convinces her to go out in the city one night, but on the drive back Marlo falls asleep behind the wheel and crashes into deep water. Like a mermaid, Tully swims to her rescue.

Then, the twist: at the hospital we learn that Tully is Marlo’s maiden name. The night nanny was a double personality. The shocked husband’s apology and a tender reconciliation quickly conclude the film. No psychologist comes on stage to explain her disorder, as in Hitchcock’s horror. Director Jason Reitman and writer Diablo Cody presume that the audience will easily diagnose her problem of domestic overwork. Yet it alarms me that I immediately accepted the scenario that this kind of insanity just happens sometimes. On second thought, the twist is an alarm that calls for interpretation. Reitman and Cody have something more to say than women are overworked and underappreciated (although the poster and logline already make that message loud and clear).

This twisted chick flick makes a fine companion to Fight Club (David Fincher, 1999). Not only does Tully mimic its doppelgänger plot, inherited from Psycho, but the protagonist Marlo almost sounds like Marla, its femme fatale played by Helena Bonham Carter. Fight Club fantasizes about a boy’s club of working class suckers who restore their manhood by battle royale, until their populist underground turns fascist. Tully’s variant of the club is the female friendship—a partnership of unconditional care, emotional processing, and secrets. Any chick flick fan learns that a girl needs a BFF or three to get by. (I can’t know if that need is real, but I love the belonging this genre gives me, even as a man (Hollywood BFFs are so open and accepting!).) Here Tully’s radical twist is more subtle than Fight Club, which foregrounds anarchist politics. Cody and Reitman are not merely saying that Marlo lacks a proper female friend. They assert that true BFFs are chimeras, impossible for most women, and especially U.S. mothers in today’s political economy.

Marlo’s husband gestures to Fight Club with his nightly video game ritual. Through glances we see how the modern organization man’s job and parental obligations subordinate him continually; then he rages and dominates fantastically in a first person shooter complete with multiplayer com headset. Reitman perfectly casts Ron Livingston from Office Space (Mike Judge, 1999). He appropriately lurks in the background until the emotional climax, and even then the editor abruptly jump cuts his tearful Oscar moment. His main purpose is to clue us into a deeper class conflict. He hates his rich brother-in-law who can buy G Wagons as toys. Fittingly, Marlo’s brother offers to hire a night nanny. He wants to restore his vivacious sister who seems to have been lost with her youth.

But only the wealthy can afford personality, or to retain one beyond youth, is what I take Tully to be saying. It is impossible to be happy and function well in modern life without servants (or equivalent care facilities or grandmothers) who perform domestic labor. Marlo bridges the gap by maniacally serving herself, exploiting the labor of a dreamy twenty something intern. Parental leave on its own does not provide enough magic. Even freed from her human resources job, domestic labor still overwhelms Marlo. She needs a night nanny, and the only one she can afford is her unpaid younger self. Virtual care.

It is significant that Tully first appears amid the psychotic stupor of reality tv. Marlo is watching Gigolos (Showtime, 2011–present), about men who perform affective labor for women. Most desperate housewives could not afford a gigolo even if they got over the moral deterrent. Television provides a virtual surrogate instead. Thus the movie Tully itself with the rich brother and the relationship problems overcome, is also a virtual surrogate for us viewers. Screenwriter Diablo Cody meditates on the same note in Young Adult (Jason Reitman, 2011). She and Reitman are not total spoilsports, however; the film believes in its political message and maybe, too, in the modicum of affective labor it performs.

Charlize Theron labors with her body more than any actor today. Her deglamorized Monster earned a vault of awards topped off by a shiny Oscar. Last year’s Atomic Blonde got her cut enough for fight club. She even had her arm cut off for Mad Max: Fury Road (George Miller, 2015). As co-producer (Denver and Delilah Films) for most of these films, we know her physical transformations are voluntary. She was not conveniently pregnant for Tully, and had to pack on 50 lbs. A jogging scene where she tries to overtake a featherweight teen has as much gravity as De Niro’s Raging Bull (Martin Scorsese, 1980), and more comic levity. Theron epitomes “body method” acting in the fleshy and fluid role of a nursing mother. One can be forgiven for overlooking her accomplishment because Cody’s witty banter distracts us. It distracts Marlo, too, whose wit maintains her humanity and her sanity (or so it appears). 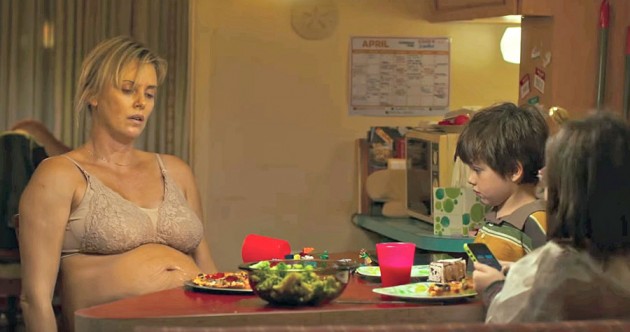 The twist makes clear that Tully is a projection, but Marlo’s children also express her psyche more subtly. At first Jonah (Asher Miles Fallica) appears autistic and simply lacking a proper diagnosis. Yet rather than deliver that diagnosis in the third act, he grows out of the problem. On the one hand, his issues do speak to the burden that working families face when they can’t afford special therapists and aides for special needs children; and his being cured is pure fantasy. On the other hand, his outbursts really express the psychological stress of his mother. Marlo has an anxiety dream of multiple Jonahs who appear in the car with her, freaking out. That dream also foreshadows the climactic ride in a hatchback that almost becomes her coffin.

If Jonah is Marlo’s id or subconscious, her daughter represents her superego. Over Marlo’s shoulders in the car to school Jonah throws a tantrum while Sarah (Lia Frankland) screams at mom to “make him stop.” Later the siblings bicker about the bedroom light being too bright or dim, with Marlo the ego that mediates between the two. At a party Sarah does a pathetically uptight rendition of “Call Me Maybe”—a song about spontaneity and joyful expression. She only opens up when Marlo joins her and performs. The corniest joke with the karaoke scene is the line from the song “Hey, I just met you…this is crazy!” which really is Marlot going crazy! Cody and Theron here extend their meditation on girl culture from Young Adult.

Through the daughter the film reflects on contemporary femininity. Their flamboyant party mascara recalls an earlier scene in the bathtub where the preteen asks why her mom wears makeup. Marlo shines when she performs for others. She pleases the karaoke audience overtly, and elsewhere pleases the school principal, her brother, her husband (sexually), and ultimately her self who wants admiration but cannot receive it as a working mother in the same way she does as a twenty something ingénue. I read the movie saying that women’s social role in contemporary North America involves crafting an exuberant persona, who performs affective labor for her community. Again Marlo only blossoms when the night nanny lifts the domestic burden, so that she can teach her daughter by example.

Marlo names the baby Mia, after her mother, to underline generations of women. The female characters in the family chart various stages of womanhood from infant to preteen to young to middle age. But the name also calls attention to the grandmother’s absence in the story, which is never explained. The film could be reflecting on the women’s lib generation who have entered the workforce and are no longer at home to fill the role of caregiver. Precisely the domestic labor of night nanny that was traditionally performed by grandmothers is what Mia and Marlo do not have. Tully’s presence as a 26 year old also suggests that the struggle of modern women having children later, in her 40s, contributes to the absence of grandmothers. Marlo must play both roles of young mother and grandmother. Cody’s plot feels uncanny in that “Mia” ultimately occasions Marlo’s self-care makeover (a twist on the equally psychoanalytical classic Now, Voyager (Irving Rapper, 1942)). 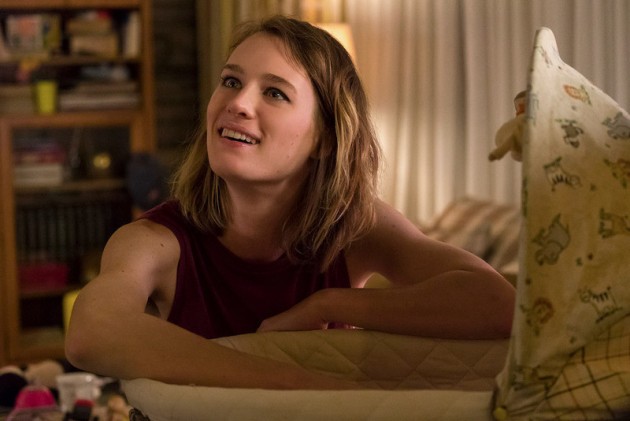 Sexuality is central to any psychodrama, but Tully tries to play it cool. An apparent threesome with Tully, Marlo, and her husband happens without any need to talk about it the next morning. At the climax Marlo’s me-time leads her out with Tully to Brooklyn, where her old roommate (and possibly former lover) Victoria still lives. A dozen Cindy Lauper songs make a hilarious montage of interminable freeway connections across the boroughs. Victoria doesn’t answer when Marlo buzzes her, drunk, in the middle of the night. Nor does the film broach the issues of lesbianism or bisexuality that nevertheless suffuse Marlo’s back story and gaze on Tully (but I can’t be sure of my impression). A mermaid motif suggests both sirens that visualize Marlo’s death drive and a mythical Lesbos. From this angle, it might be heteronormativity as much as class that oppresses our typical mom.

Diablo Cody and Jason Reitman have now made a handful of realist films about ordinary people in North America. The artifice appears in characters who speak extraordinarily acerbic lines that balance out an underlying sadness. Teen parents in Juno (2007), jet set consultants in Up in the Air (2009), provincial thirty-somethings in Young Adult (2011), and here older parents map a social geography of lives that regular people live. Taken together, no lifestyle stands above the rest. The single subjects seem to lack family, but the family characters lack a professional salary and creative freedom. If these people truly tried to escape they would end up like Psycho’s Marion Crane, sunken in a pond of dreams. 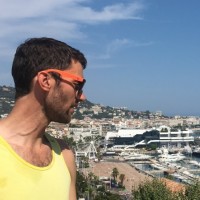 Grant Wiedenfeld teaches film and media at Sam Houston State University. He received his PhD from Yale University and his MFA from the University of Wisconsin–Milwaukee. From his base in Houston, he writes mainly on North American cinema but keeps one eye on happenings in France.