It was time again for another of the bi-annual Film Society silent screenings before the usual packed-out crowd of infidels seated at the pews of the Westmount Park United Church. Because this time it was a series of shorts by a number of those brilliant physical comedians of the silent era of yore, I knew my now 13-year old daughter would get a kick out of revisiting her favourite comedian Chaplin doing his thing.

There was even some added fun to this screening, of the variety that Phil Spurrell, the head Cinéclub honcho, has done to great success in the past (my daughter and I would know – we’ve been there), with the three films (each starring its own physically prat-falling icon) being scored by a different pianist… and the audience deciding through applause at the end who did the best (judging both musician and comedy legend). While I’m always a bit iffy (at best) about these kinda mass audience ‘judging of artists’ things, it’s always been done with the Film Society in a jovial spirit of celebrating the musicians (they all get some pretty hefty applause), rather than just isolating a ‘victor’ (though, of course, that is inevitably what happens)… so it could be worse – at least it’s not the Academy Awards where we then have to listen to some weeping narcissist give an acceptance speech how ‘humbled’ she/he/non-gender identifier are at winning (I don’t know… somehow that doesn’t quite seem like a particularly ‘humbling’ moment to me – now, falling down in a dirty pool of water as my pants split open revealing my flaccid penis and a geyser of the diarrhea I’ve been desperately holding back shoots out, all with the girl of my dreams looking on with a crowd pointing and laughing – that I’d call humbling. Winning an Academy Award? Not so much). 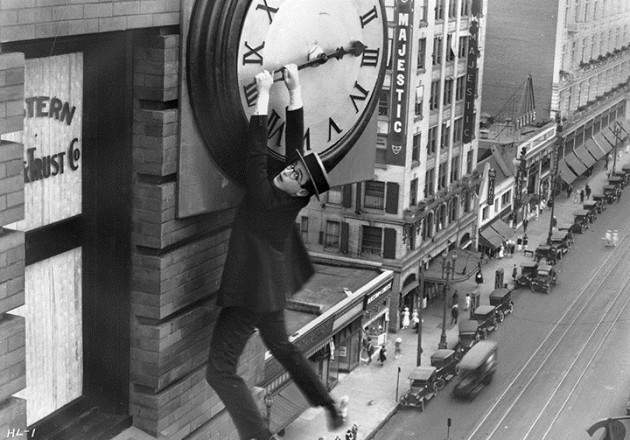 The first brilliant funny man out of the gate was Harold Lloyd, in the longest – and perhaps most well known — film of the evening, with its 73 minutes of running time allowing it to be considered a feature, Safety Last!. Playing a country boy determined to carve out financial success in the big city so his fiancée can come join him, Lloyd – and his roomie pal (Bill Strother, another physical comedian, capable of some harrowing stunts) – do their best against the odds to make ends meet – finally leading to that incredible scene, equal parts gobsmackingly hilarious and nail-bitingly exciting – in which Lloyd is forced to scale an entire skyscraper as a publicity stunt – all with the cops hot on his trail. With the scene itself including perhaps the most famous image of the entire silent era – Lloyd dangling precariously from a large skyscraper clock over the moving traffic on the street far below (I see the image every day as I have a clock in my home designed after it) — the moment, and the film, are an unforgettable and awe-inducing experience. As with so many of these silent comedies, the physical gags and stunts are so impressively staged and executed, they just don’t seem to get old no matter how many times you see them (as my daughter and I can attest, having seen this one at least three times and enjoying it as much as ever).

Where Lloyd’s bespectacled character is the common man trying to get out of a fix in ways we can all relate to, Buster Keaton, on the other hand, with his constant hang-dog expressionless face (they didn’t call him ‘the Great Stone Face’ for nothing), while no less astounding to watch, is more a cartoon character come to life (though no less an indelible and brilliant presence than Lloyd’s). The Keaton comic persona is usually more isolated, with his bumbling, inexpressive ways unable to fit in with the normal society going by around him – all while usually capturing the ire of bullies. With the short The Blacksmith, the great heights Keaton was clearly willing – and somehow capable of – plummeting without suffering horrific injury (though, as with all these guys, he certainly had his share) as well as the incredibly choreographed astounding moments that could have clearly led to outright death, are never less than high-wire enjoyable. 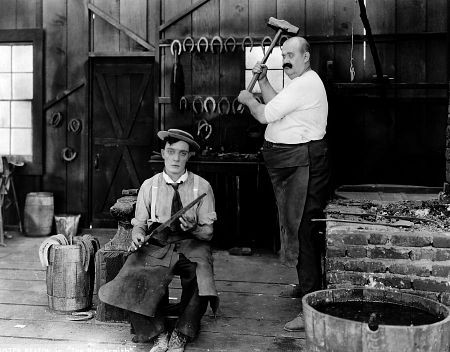 The best for me, however, was he who came third in the night – Charlie Chaplin, the Little Tramp himself, with The Immigrant detailing – in both hilarious and deeply poignant (an ever-present trait of Chaplin’s work, and the very thing that raises the humanistic silent comedian’s efforts to the heights they reach) fashion – the travails of an immigrant (Chaplin) as he manages the rough sea-sick inducing boat ride across the ocean packed in with his fellow travellers, is accused of theft, kicked around by a cruelly indifferent customs, battles a brutally dictatorial head waiter in a restaurant (played by the large-statured nemesis of the Little Tramp in many a Chaplin film, the wonderfully imposing Eric Campbell) and finally finds love with a fellow immigrant (Edna Purviance).

With The Immigrant, Chaplin does what is present in all of these silent masters’ works, yet which Chaplin openly addresses as part of the fabric and narrative of his films – that being bringing to the fore something lost a long time ago from America’s cinema screens — an awareness of social inequality and the struggles of the lower and immigrant classes, as a matter of course, and of life, rather than just as something to solve in a Hollywood ‘social problem’ movie way. Obviously, all three of them were working off what they knew, because, to be clear, as thankful as I am that they all did the incredibly physical comedy they did for our pleasure, I dare say none of them would likely have been deliberately risking life and limb for a joke (or even be allowed today to get away with even half of the precarious dangers that they put themselves through on film sets), no matter how brilliantly, if not at least partially due to, during deeply difficult financial times for the country, they had to put bread on their tables.

There is a profound sense of hope and optimism in Chaplin’s Little Tramp work. He constantly fights against the injustices of unequal society, never conquering (he will always be the Little Tramp at the bottom), yet always somehow finding sunshine rays of hope to sustain, usually through love and some form of humanity. Sadly, there is little irony in the fact that Chaplin’s implicit filmic calls for ‘social’ reform would lead him to falling under the radar of the still despicable FBI, who put him on their communist blacklist for over 40 years, eventually harassing him out of the country entirely.

Last, but not least, as a special treat – a 7-minute 16mm relic of a little remembered silent comedian named Max Linder — who not only pre-dated the celebrated three, but was often cited by them as a major influence – was shown. While it was definitely worthwhile to catch a glimpse of Linder – who I had never heard of — playing a wealthy socialite about to get married, until he gets to close to a warming fire and comically hops around with his shoes on fire, it didn’t give me quite enough to go on to get me excited for re-discovery (there was little of the brilliant physical stunt work going on of the later masters for instance).

I honestly can’t remember which of the three musicians won the applause meter for best accompaniment, but they were all just fine to me. However, when Phil added in the audience choice for best comic genius of the three, as much as we enjoy them all, my daughter and I sat on our hands until Chaplin was mentioned… and then were thoroughly disgruntled when Lloyd won. All three are epic geniuses of physical brilliance, of a type and from a time we’ll never see again, but no one, as my daughter and I agreed (okay, some would say I have some undue parental shaping of influence over my daughter’s opinion in this matter – though I prefer to see it as I enlightened her to the obviously correct point of view!), imbued his work with the pathos and humanity of Chaplin. I mean, the social conscience of his work hit so deep he was eventually exiled from his own country by the powers that be. And for that, he’ll always get my (and my daughter’s) highest applause on the Cineclub/Film Society meter.