The Trial on DVD 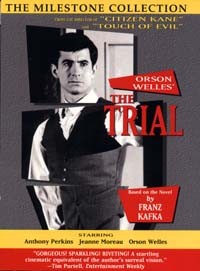 “To be in chains is sometimes safer than to be free.”

“The highest court is inaccessible to you, to me, to us all.”


Orson Welles has been on record as saying that The Trial (1962) was the favorite of his films. Perhaps this is because it was the first film since Citizen Kane to be released precisely as he had intended, without any studio imposed changes and interference. Watching the film in this impeccable Milestone Film & Video (distributed by Image Entertainment) DVD transfer, taken from a pristine original 35mm negative, makes it easy to see why Welles’s felt that way. I had scene the re-released 35mm print when it played in Montreal and was struck by how great the print was, and what a difference it made to the overall impact of the film (from an earlier 16mm dupe print I had seen). And to my pleasure, the DVD is even more stunning as it contains none of the scratches incurred by the travelling 35mm print. The Trial represents what has become a type of Mecca for literary minded filmmakers looking for the challenge of successfully adapting a Franz Kafka work of fiction. The works of Kafka are so dependent for their full social and aesthetic power on the narrational flexibility of literature, that they have proved extremely difficult as material to adapt to film. Take as an example his classic short story “Metamorphosis,” which opens with the transfixing line “As Gregor Samsa awoke one morning from uneasy dreams he found himself transformed in his bed into a gigantic insect.” How does one adapt this to film in a way that maintains the tension between the objectivity of the narration and the subjective imagery it invokes? How would you film this without making it appear ludicrous? The story has tempted many filmmakers but has yet to be successfully adapted to film. Welles’ The Trial remains the best adaptation of any Kafka fiction. It adroitly captures that vague sense of guilt-ridden paranoia and anxiety typical of Kafka’s major works, which is so encoded in Western consciousness as to have attained the generality of an adjective, “Kafkaesque.”

The paranoia and anxiety is born into the film, beginning before the narrative proper begins. In the first scene after the opening pin-cushion animated parable, our hero, K (perfectly cast as Anthony Perkins), finds himself, much like Gregor Samsa from Metamorphosis, waking up to a world which has either changed around him, or which he has changed himself through dream or fantasy projection. The scene begins with a close-up of K sleeping in bed. K is disoriented by an uncalled visit from two grim looking detectives who look like they have just stepped out of a film noir set. It seems that our nervous hero K is being arrested, but neither he nor we know why. K acts guilty, appearing nervous and edgy. His self-accusation comes through in both his actions and the formal quality of one long take in this opening scene. Many critics have justly lauded the famous opening long take from A Touch of Evil (1957). Although this long take from The Trial lacks the earlier shot’s physical bravado, in many ways it is more effective because of how well it expresses the scene’s subtext: K’s growing anxiety and the sense of emotional claustrophobia that engulfs him. The take last a little over 4 minutes (4’32-8’58”) and contains K within the four borders of the frame by the low angles that emphasize the low ceilings that hover inches from his head, the tight framing and positioning of the detectives on the edges of the frame, the camera that booms down to a low angle to accentuate his entrapment, and the small camera movements that continually reframe him into a cramped composition. Although not as dynamic as the opening shot from A Touch of Evil, it immediately establishes the importance of art direction, lighting, and camera movement as thematic props. 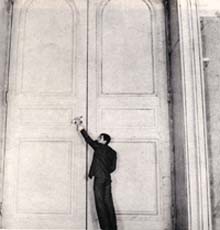 Expressionist use of an oversized door, symbolizing K’s isolation and expressing how each person is ultimately left alone to face their own demons

The Trial demonstrates Welles’ unique mastery of both mise-en-scène and montage style. (Something which he displayed in every film.) Throughout the film Welles, underscores the meaning and power of a long take by a striking edit which occurs unexpectededly or on the offbeat. Like the moment during the opening arrest scene where K’s sense of guilt and unease is underscored by a cut to a tight 3-shot of his office clerks glancing an accusatory look at him. Welles uses a roving camera in conjunction with expressive off-screen sounds to make scene changes or abrupt mood changes within the shot. For example, Welles changes the mood and scene from the visiting detective to K’s discussion with his landlady Mrs. Grubach (Madeleine Robinson) by moving the camera from K’s bedroom-living area to the kitchen, with the detectives’ voices still heard off-frame. And then he restores the tension by quickly dollying out of the kitchen through open doors back into the room where the detectives are.

Critics have come up with varied interpretations for the source of Kafka’s character’s guilt (social, political, and existential being the most frequent). Welles maintains a similar openness for the source of K’s guilt. Many scenes are immersed with images that evoke World War 2 (concentration camps, mass executions, the post-war East European setting, etc.). None more so than the night scene where K walks past a line-up of glum old men in tattered rags wearing numbered tags. However, the recurring tension in Welles’ piece is sexual. Nearly each of the opening seven scenes reveals a character who insinuates or assumes K’s guilt in sexual terms. In the opening scene with the detectives, K initiates the aura of sexual guilt with a Freudian slip when the word phonographic comes out as pornographic. In his scene with Mrs. Grubach, she implies that he is having a sexual tryst with another boarder, Miss Burstner (Jeanne Moreau). When we see at him work in the first office scene he is visited by his young female cousin Irmie (Maydra Shore). After K’s boss has seen them together he speaks to K and implies that he is having a pedophiliac relationship with her. And in the later scene where a lady pulls along a trunk, K is blamed for Miss Burstner’s eviction. When at work K hears strange noises emanating from a closet room. He opens to investigate and witnesses a bizarre ritual where the two detectives who arrested him are being flogged by a superior. The frantically edited ‘closet’ scenes have a masochistic and homoerotic undertone (and oddly enough feel like the attic bird attack scene in The Birds, made one year later). When he meets the man who is to be his barrister, a fascistic megalomaniac played by Orson Welles, he is seduced by the barrister’s nymphomaniac mistress Leni, played by the too beautiful Romy Schneider. Later during a second visit to the Advocate, Leni implies a menage a trois between herself, K, and the pathetic, rat-like Block (Akim Tamiroff). Near the end K visits the homosexual court artist Titorelli (William Chappell) in his bizarre cage-like apartment. On his way to the apartment K is chased by a horde of rabid children. This sense of perverse sexuality continues from scene to scene, only heightened by the gothic art design and expressionistic black and white cinematography. 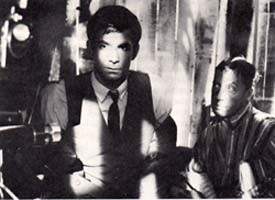 Welles introduction as K’s Advocate is as baroquely impressive as his introduction as the corrupt, overweight detective Hank Quinlan in A Touch of Evil. To begin, the art design of his home is right out of a 1930’s Universal horror movie, with chandeliers, garish candlesticks, and thunder and lightning. The art design here establishes a contrast in mise-en-scène between the orderliness of K’s world (his apartment and his office) and the disorderliness of the law world (the Advocates house, the courthouse). Leni walks K over to a large ornamental bed, in which the huge figure of the Advocate rests. She lifts the hot cloth covering his face, causing steam to rise off his face and painting him as a demon rising from the depths of hell.

The film’s sense of paranoia and disorientation is aided by the fact that Welles had to shoot in many different cities after a production company reneged on some of its financial commitment and Welles could not build the set he had in mind for much of the film. Wandering the streets of Paris one night, Welles came across the deserted Gare D’Orsay, walked inside and realized he had his problem solved. In the end, the film was shot (mostly) in Zagreb, Dubrava, Rome, Milan, and the Orsay train station (now the famed Orsay Museum). The result is that some scenes are an architectural nightmare, disorientedly edited from one location to another. An example is the scene where K meets her cousin Irmie on the steps of the Orsay train station. As the scene progresses we move through architectural history, moving from the train station in Paris, to the Palazo di Giustizia (palace of justice) in Rome, to a factory in Milan, to a dreary council flat in Zagreb. This spatial disunity only adds to K’s overall sense of disorientation and the film’s visual motif of the maze (Leni’s webbed fingers, the labyrinth corridors in the courthouse, the narrow corridors leading to Titorelli’s shadow-fractured lair).

An odd production note is that Welles, not happy with the sound recording for much of the film, redubbed the voices for up to eleven different characters. The stunning sound clarity of this DVD will make it fun for those trying to pick out Welles’ versatile voice characterizations. This DVD presentation allows one the flexibility to closely rewatch and study a film rich in visual style and with dialogue that is witty, cryptic, and as powerfully evocative as the imagery.