Tinker Tailor Soldier Spy (Tomas Alfredson, 2011) is, at least on the surface, ideologically cynical. The great ideological divide of the Cold War is treated as an amoral choice.

Bill Haydon (Colin Firth) articulates why he decided to turn traitor and feed secret intelligence information to the USSR, “It was an aesthetic choice as much as anything else. The West has become so terribly ugly.” This cynicism extends to our protagonist, George Smiley (Gary Oldman), who describes the political difference between the West and the USSR when recounting his meeting with the Russian superspy, Karla (voiced by Michael Sarne), “We’re not so different you and I. We’ve both spent our lives looking for the weaknesses in one another’s systems. Don’t you think it’s time to recognize there is as little worth on your side as there is on mine?” Indeed, in this same scene, Smiley describes the fact that Karla held a firm ideological conviction, “He’s a fanatic.”

No other character redeems this ideological vacuum and the film plays out as if it were merely an accident of circumstance as to which side happen to be the protagonists versus the antagonists.

The violence in the film is grisly but equally free from politicisation. On discovering the dead body of a victim killed by the Russians in Instanbul, Ricki Tarr (Tom Hardy) states, “It was a great piece of work. I couldn’t have done it better myself,” aligning the actions of the Russian assassins with his own with no moral compass to distinguish the two.

Even the torture of Jim Prideaux (Mark Strong), including forcing him to watch the execution of Irina (Svetlana Khodchenkova), is relayed in such a way that one suspects the same or similar treatment is conducted on both sides (although it is notable that this is not the treatment meted out to Haydon in the military facility in which he is held after being revealed as the mole).

All this implies that the film has a rather post-modern feel to it, unwilling to identify itself with an ideological position and thus offering a relativist view of morality and politics (and I am sure that this is consistent with Le Carré‘s novel on which it is based). I tend to react negatively to such themes and narratives. Whilst it might appear to be the height of sophistication, and certainly makes a change from an over-simplistic goodies and baddies James Bond type distinction that is so prevalent in big budget filmmaking, the inability to tell the difference between (or even the proactive desire to deny such a difference) the social organisation of people, governance, means of production and commitment to human rights, between the USSR and the West, is rather disgraceful, as if human well-being was equally well (or poorly) served in both.

However, looking a little more closely at Tinker Tailor Soldier Spy, we do see signs of other interesting political themes in which the film does seem to offer an opinion that implies there may be superior social and cultural practices and ideas that can be adopted that would better promote human fulfilment and wellbeing – i.e. a non-cynical, non-relativist ideology.

The events in the film take place during a time in which significant social emancipation was happening with regards to civil, women’s and gay rights in the West. Yet the characters are almost exclusively white men, indeed upper middle class white men. The drive towards social equality of opportunity and rights seems not to have infiltrated the Oxbridge world of espionage and this leads to a pervasive subtext throughout the film of loneliness, female oppression and homosexual repression.

Almost all the protagonists are depicted as lonely, isolated and unfulfilled, having to make deep personal sacrifices when it comes to their relationships. Tarr is willing to give up everything for Irina but as a result of their mutual embroilment in the world of espionage she is killed and he is left alone. Peter Guillam (Benedict Cumberbatch) is forced to separate from his gay partner for fear of being found out by his own establishment at the cost of much personal distress and without being able to provide a reason for his actions to his lover. Connie Sachs (Kathy Burke) is “seriously underfucked” and is depicted as alone, explicitly and overtly unable to partake in the open liberation of physical affection that those around her engage in.

Smiley is of course the ultimate loner, the trauma of his wife’s infidelity and absence is felt by him throughout the film, to the degree that we are not entirely sure whether her return at the end is good for him or not.

Most pertinent is Prideaux who must live through the denial of his feelings for Haydon and the despair of unrequited love. The film intrinsically links this disappointment, through sequential cutting, to Prideaux’s assassination of Haydon. It is this that best summarises the thematic pre-occupation of Tinker Tailor Soldier Spy. The true drivers of the characters’ actions are not ideological but psychological. Prideaux does not kill Haydon because he was a traitor to his country, he kills him because he was a traitor to him personally, not just by giving him up to the Russians in Budapest, but because he refused to respond to Prideaux’s homosexual feelings towards him and forced Prideaux to suppress his authentic self.

Throughout the film there is an abuse of women and a denial of female empowerment – Connie Sachs’ unfair firing and mistreatment, Irina’s abuse by her husband and execution by Russian captors, along with the absolute denial of Smiley’s wife to have an identity of her own beyond his limited view of her as a concealed tool of persecution for his own masochism.

The combination of omnipresent pervasive repression and oppressive misogyny is the true social evil of the film and is far more responsible for the depressed state of the characters than the ideology of Cold War politics. Instead, the somewhat threatening but equally hopeful presence of background graffiti in a single shot in the film, in which the message is given prominence but is not referred to explicitly, is perhaps the film’s only ideological hope –“The Future Is Female”. 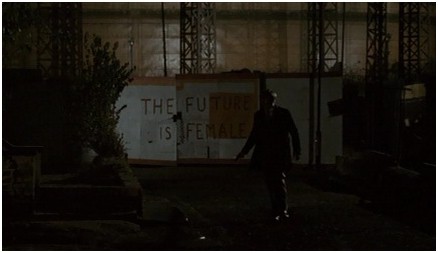 Leon Saunders Calvert works in a financial information media company in London. He has a BA Hons from the University of Essex in Philosophy and Literature, including film studies, and an MSc in International Management from the University of Reading. He believes that the study of philosophy and culture can be fundamental to providing us with a better understanding of the world we live in and the ways in which it can be improved, rather than undertaken as a kind of intellectual workout, as is so often the case. Leon has published reviews in Film International and The Film Journal.