Through Her Eyes: Visuality and the Gaze in The Descent 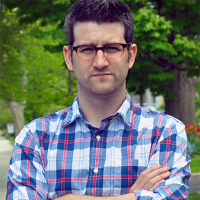 Ryan Barnett is a Montreal-based creative producer and writer. Over the past 10 years, he has created thousands of minutes of bilingual video and podcast programming for the cultural sector. His work has been installed in museums, featured on CTV, CBC television and radio, in The Globe & Mail, National Post, Canada’s History, Canadian Geographic and dozens of other publications. His writing has been published by Firefly Books in North America and Éditions Glénat in Europe. Ryan is currently writing a graphic novel biography on the life and career of Buster Keaton.”