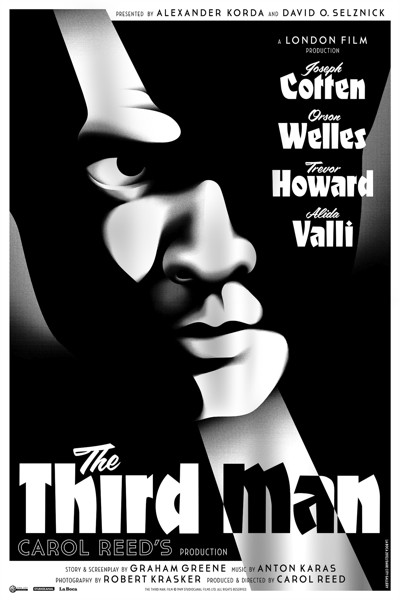 If you are a fan of Sir Carol Reed’s post-war British noir classic The Third Man, throw away your old, scratchy, faded public domain video copies and rush to buy the recent Criterion DVD release. You will hardly recognize the film. Post-war divided Vienna, canted, desolate, and cavernous, never looked so romantic. To bring home the point, the Criterion DVD includes before and after demonstrations of their digital restoration.

The Third Man is a gripping, political noir thriller set in a post-war Vienna divided into four allied-governed sections (France, Russia, Britain, America). Though the political context is used mainly as an atmospheric backdrop, it does shade the film’s characterisations, and is a fairly accurate depiction of the international intrigue surrounding postwar Vienna. However, Graham Greene’s original story downplayed the political side, as he envisioned the story as merely an entertaining potboiler without subtext. 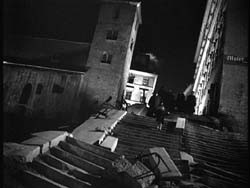 An American writer of pulp western novels, Holly Martins, arrives in Vienna on a work offer from an old school friend Harry Lime. Once there he learns that Lime was killed in a car accident. Unconvinced by official accounts, he remains in Vienna to explore the strange circumstances behind Lime’s death. In the film’s first hour Martins meets with the principal characters surrounding the intrigue, including Lime’s Czechoslovakian girlfriend Anna Schmidt, several eye-witnesses, and police major Calloway (a narrative element reminiscent of Citizen Kane). At first skeptical, he slowly comes to accept the harsh truth of Harry Lime as a ruthless black marketer involved in the underground trafficking of stolen, diluted penicillin (that caused the death of many sick children). Sixty-five minutes into the film, the “dead” Harry Lime makes a dramatic appearance, literally stepping out of Vienna’s shadowy darkness. In his relatively short screen time, Welles, who wrote most of his own dialogue, leaves a lasting impression of seductive evil. Even knowing about the horrendous consequences of the diluted penicillin, the characters remain loyal to Harry Lime. Anna because she still loves him, the American Holly because of their 20-year friendship (though only for a time being), and Lime’s Austrian and Russian associates for self-serving reasons. Only the British characters, not without blemish, resist evil’s “seduction.” The remaining 40 minutes center on police efforts to persuade Holly to become an informant and help them capture the mythical Harry Lime. In keeping with Reed’s decision to add social and political import to Greene’s story, is the stock footage of the maimed and deformed children who were victims of the tainted penicillin. Calloway uses this footage to successfully convince Martins to help track down Lime.

The Third Man reflects Vienna’s varied national and political makeup with its own remarkable cosmopolitanism. The film stands as one of the earliest examples of successful internationalism, with creative input from Great Britain (Carol Reed, Graham Greene, Alexander Korda, Trevor Howard), Australia (Robert Krasker), United States (Joseph Cotton, Orson Welles, David Selznick), Italy (Alida Valli, Dario Simoni), and perhaps one of the film’s most important “characters,” the city of Vienna (Austria) itself. As Peter Bogdanovich says in his intro, The Third Man is a great film in the ‘non-auteurist’ tradition of Michael Curtiz’s Casablanca.

The four-power occupation of Vienna is told from a decidedly British viewpoint. Harry Lime, whose nationality remains unstated, lives by a code of individual totalitarianism. As Marc Ferro argues in his book Cinema and History, the changes made by Reed to Greene’s story render the film pro-English, anti-American, and anti-Communism. In Greene’s story Martins is English, Anna is the daughter of an Hungarian Communist, and Pupescu is American. In Reed’s version Martins is American, Anna a Czech fleeing Communism, and Pupescu a Romanian. [1] The Criterion DVD also includes both the American release and the alternative British opening. In the latter, Reed’s cynical, detached voice serves as narrator, identifying himself as a racketeer. In the American version Martins’ own voice (Cotton) introduces himself and post-war Vienna in a more upbeat tone without any references to the black market. 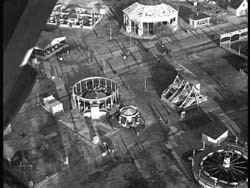 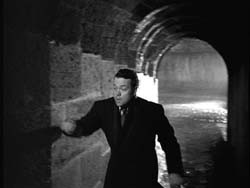 …to the lowly gutters

The Third Man is a fine example of British film noir. Reed uses gothic visual touches such as subtly canted low/high camera angles, ominous shadows, and dank, fog-filled streets to depict Vienna as a sinister labyrinth. The labyrinth becomes a visual motif echoed in the film’s chases up circular staircases, through winding streets and bombed out buildings, and culminating in the hunt-down of Lime in the cavernous underground sewer system. Lime’s physical and geographical positioning in the frame can also be seen as a reflection of his “Nietszchean” moral philosophy. In several key scenes Lime is positioned high above the ground, such as during the famous Ferris wheel scene, and later when he appears atop a mountain of rubble. His symbolic moral ‘fall’ comes in the end, when he is hunted down like a rat in the city’s sewer system. This ending, with Lime being ferociously tracked down from every direction, recalls Peter Lorre’s fate in M (another reference to M is the old man seen near the end selling balloons). 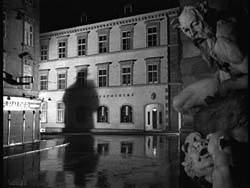 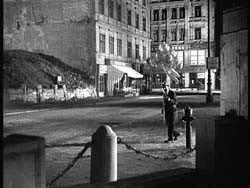 The Third Man has much to remember it by, including Anton Karas’ haunting zither music (which led to a zither craze across Europe and America) and Welles’ indelible impact as the compellingly evil Harry Lime. One of the DVD’s features includes footage of Anton Karas at London’s Empress Club playing The Third Man theme music to an oddly disinterested middle class audience. Even people who have seen the film only once have a vivid memory of at least one scene; such as the remarkable set-pieces in the Prater amusement park (which includes Lime’s famous “cuckoo-clock” speech) or the finale in the sewer system; or the final exchange of close-up’s between Holly and Harry that communicate 20 years of friendship, pain and acceptance; or, perhaps the film’s most memorable moment of all, the final shot of the film. This final shot raises an interesting question concerning stylistic choice and formal determinism: why did Reed decide to shoot this scene in a manner so different from the rest of the film?

Before describing the shot it is important to note that this film has a very fast cutting rate, with an average shot length (ASL) of 5”, and of its 1253 shots only a handful (approximately 9) can be considered long takes . This is an important point, one that relates to the broader issue of relative pacing (pacing as it may change across a single film). Within the context of such a fast cutting film, the inclusion of the long take at the end gives a ‘perceptual saliency’ [2] of time that is a rare occurrence in the film. In the moments leading up to this shot, Limes’ funeral is over, and Anna, as she did in the opening funeral scene, walks away down a long, straight dirt road. Holly Martins rides past her in a car with British captain Calloway. He rides a while but then decides to get off in the hope that he can talk to Anna. The scene cuts to a shot of the long, dirt road, symmetrically framed with two rows of bare trees flanking the road and falling away to form a vanishing perspective. Anna appears as a small speck in the extreme background of the shot, walking along the middle of the road (though she is so far that it takes a while to tell whether she is walking to or away from the camera). Holly is visible in the lower left of the frame, in full shot, leaning against a wagon cart looking in the direction of Anna. The camera remains static for the full length of its 1’12”. Autumn leaves fall gently to the floor; Karas’ famous zither theme music plays on. With each passing second Anna nears closer to where Holly is waiting. Will she stop to join him? Will she forgive Holly? Will she return his love? Will she at least acknowledge him? The shot’s internal time is weighted by all these factors. We feel Holly Martins’ psychological time, stretched by his anticipation as he waits to see if Anna will stop to talk. As she nears Holly, his anticipation, shared by us, mounts. His temporal consciousness is heightened. Anna, who remains in focus throughout the shot, walks stoically past him without batting an eye, and straight past to the right of the camera off-frame. Holly, his head turned to follow her, takes out a cigarette, lights it, throws away the match, and the scene fades to black. 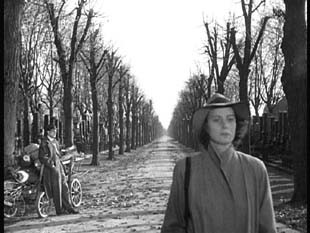 There is always stylistic choice, so Reed could surely have cut to a close-up of Holly Martins, or to a close-up of Anna Schmidt, without altering or impairing narrative coherence (Anna does not forgive Holly). Several alternative ways of structuring this scene could be imagined. But would they hold as much emotional or dramatic weight? First of all, what is the emotional and dramatic weight that the long take is supposingly making more effective? The most obvious one is the spurning of Holly Martins. I would add that at a deeper level, the most dramatic emotion of the scene is guilt: guilt felt by Holly Martins for informing on his friend, and guilt felt by Anna Schmidt for continuing to love such a despicable man, or for not realizing what he was. In any case, let us say that an alternative style would not have rendered these emotions as effectively. That by giving time “perceptual salience” through the long take, augmented by the rarity of such a gesture (relative pacing), the suspense of the moment is heightened. More importantly, it appears that director Carol Reed did not think an alternative style would be as effective, which explains the notion of a ‘soft’ formal/thematic determinism being applicable to this shot. This can also explain why this particular shot has become much discussed, while an even longer take (1’15”) between Anna Schmidt and Captain Calloway in the police station has never, to my mind, been even mentioned in any critical discussion of the film.

At this point I will add another possible reading for the inclusion of this long take at the film’s end. From a purely emotional level, I do not think the relationship between Anna and Holly is convincingly scripted or portrayed. Subsequently, by the end I care very little about how they feel toward each other, or the consequences of unrequited love. Perhaps director Reed was aware of this, and included the dramatic imposition of the long take at this critical juncture to give the ending a purely formal weight not carried by the narrative, script, or performances alone. Whether the long take was used to enhance an inherent emotion or dramatic point, or make up for an inherent weakness is largely a matter of taste and interpretation. But in either case, what is certain is that the passing of time in this final long take is not something abstract but is integral to the dynamics of the scene, which is not the case with the noted longer take during a scene at the police station. In terms of the noted ‘relative pacing’, just as the avoidance of cuts can dramatize an edit, the avoidance of lengthy takes can dramatize a long take. And, regardless of the reason, this latter strategy is surely at play in the last shot of The Third Man.

As an added note to this final shot, Graham Greene’s treatment of the story ends on a single note of happiness, with Anna embracing Holly. Apparently Green was initially quite upset at the change, though he grew to appreciate Reed’s aesthetic choice. Luckily, Reed’s ending, which is more in keeping with the film’s dark pessimism, prevailed.