In James Marsh’s The King (2005) a young Mexican named Elvis (Gael García Bernal) discharges himself from the US Navy to meet, for the first time, his American father, Pastor David Sandow (William Hurt). Things don’t go as smoothly as Elvis might have hoped: David now has a family of his own and is not interested in accepting his new son, the product of a relationship with a Mexican prostitute in his youth. Elvis, whose mother is now dead, takes desperate measures in reaction against this rejection and in the hope of gaining acceptance from his father. The film has caused a certain amount of controversy, Variety labelling it ‘a noxious film morally and an aggravating one dramatically.’ Marsh’s film builds to slightly unconvincing extremes as Elvis instigates incest and murder within the family, allowing for a reading of his outsider character as nothing but a ‘devil,’ which seems to be the reason for this accusation of ‘immorality.’ The King is, however, altogether too strange and poetic in style to be considered any kind of threateningly moral polemic. 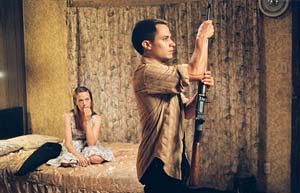 Badlands-like Imagery in The King

If The King has problems with dramatic structure, they probably arise out of the director’s apparent wish to offer both political polemic and symbolic dream-text. On the whole the film works much better when upholding the latter through a series of tightly-constricted social settings which portray a suffocating vision of America, which certainly nevertheless has political implications. The car, for example, is a symbol throughout the film of masculine control. Twyla Sandow (Laura Harring), the mother of the family is the first to see Elvis, in an early scene, literally looking behind her in the family car to see Elvis in his car, following them. The image of Elvis himself that follows the set-up of Twyla’s point-of-view at this moment, however, is marked by an ambiguity of ownership, as it shows Elvis in the rear-view mirror, through which David is more likely to be looking than Twyla. After David confronts Elvis and drives the family car away again it is quite clearly David, the father, who watches Elvis disappear in the rear-view mirror. David’s appropriation of the gaze here seems to threaten the negation of Twyla’s own gaze and by inference Twyla herself. 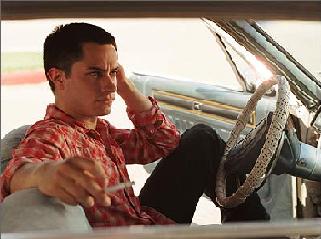 David’s church takes on the same kind of restricting role as the family car, in offering a closed-off world that seems already to have a structure. As David is giving a sermon in which Elvis seems to be coming to replace the Sandows’ son Paul (Paul Dano) within the family unit, Twyla rushes out of the church into a busy street and is nearly run over. The ease with which David allows for Elvis to replace Paul serves to suggest that within patriarchy the bond between father and son is often nothing more than blind self-replication on the part of the father. Before leaving the church, however, Twyla has a momentary blink-and-you’ll-miss-it point-of-view of Elvis. Usually a point-of-view shot without narrative-value allows us to imagine the way that one character perceives another, yet in this instance a greater complexity of identification is brought about due to the fact that Twyla hardly knows Elvis, so that we are left uncertain as to what she thinks of him. This point-of-view shot is then open to interpretation and allows for the possibility that human relations can be formed that go beyond the uniforms offered up by the mainstream of society.

This challenge to look beyond the “meanings” offered to us in society is upheld throughout The King in a consciously postmodern blurring and clarifying of the borderlines between human identities and identification. This is portrayed particularly well in the film’s careful use of mirrors: at one point, for example, Malerie (Pell James) tries on her mother Twyla’s make-up in a mirror that the film has previously used symbolically to present her parents’ separation. Malerie steps naturally into her mother’s identity, making a scene that would normally appear beautiful feel uncomfortable. Later, after the death of her brother Paul, Malerie examines his bedroom, seemingly imagining herself in her brother’s role. As she looks into a mirror in a room that is so definitely not hers she seems made uncannily aware of the impossibility of the merging of two separate human identities. The film is also full of characters looking at one another with the effect that this discourse on the relationship between separate identities becomes extended out to the audience to make us consider more deeply the investment we place on our identification with the characters that we are looking at on the screen.

This emphasis on the complexities of identity is brought to the global level in a soundtrack in which songs that combine both Spanish and English, even within the same song, suggest the tension of the Texas/Mexico border. Indeed the film’s setting can be considered itself as within this liminal position: Texas was once a part of Mexico but claimed its independence; shortly after, it became a part of the United States. Our Mexican Elvis seems to follow the same trajectory as he first rejects the uniforms of both the US Navy and then a Pizza store where he works as a delivery boy. Later he dresses himself again in his US Navy uniform to impress his American father and ultimately attaches himself to an American family. Elvis’ underlying inclination towards the American Dream is, of course, implied right from the start in nothing less than his rock ‘n’ roll name. It is in fact difficult to decide whether to identify Elvis as truly Mexican or as much an American, as he has parents of both nationality and his birthplace is never mentioned. The immoral actions Elvis takes at once seem to have a level of political significance and yet cannot be accused of laying the blame entirely in either camp.

By casting Mexican actress Laura Harring as American Twyla Sandow, who becomes a substitute mother for Elvis, Marsh also implicates his own film as a part of society that threatens this negation of a Mexican identity. At one point in David Lynch’s Mulholland Drive Laura Harring’s Mexican character visits a nightclub in which she hears the song ‘Llorando.’ It is the Spanish-language cover by Rebekah del Rio of a Roy Orbison song, ‘Crying.’ Elvis’ mention, early in The King, of his dead Mexican mother Llorando reminds us that the pain of the negation of identity is what lies beneath the surface of this ‘American’ film. 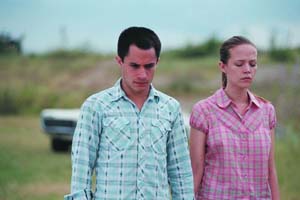 The performances of Gael Garcia Bernal and the newcomer Pell James are well thought out working up a complex relationship. Bernal takes on the difficult task of portraying a character of contradiction, who casually visits a prostitute, yet is shy and sensitive in his love for Malerie. Bernal allows Elvis’s incestuous love for Malerie to emerge convincingly and even sympathetically out of a clearly desperate but unspoken need for a home. Pell James’s performance is particularly powerful in the way that Malerie’s love appears as a slow and again unspoken process, so unlike the usual immediacy of love in so much American cinema. Malerie’s love also seems to come about as a result of Elvis’s sensitivity towards her, complicating the usual moral simplification of love. The King is a worthwhile depiction of the delusional social constructions that we accept as “reality” within society, but that threaten to negate the real lived experience of outsiders to these systems.

Ben Dooley has a First Class Degree in Film and Literature from the University of Essex and is currently taking a Masters in Film and Visual Media at Birkbeck, University of London. His undergraduate dissertation was on Jim Jarmusch. He also has specific interest in the auteurs of ‘Golden Age’ Hollywood: John Ford, Nicholas Ray, Douglas Sirk, Fritz Lang and Alfred Hitchcock, as well as the films of Rainer Werner Fassbinder.