The Maltese Falcon and the Case of the Mystery Square

and other things lurking in the background

In last month’s issue I wrote an essay on Rodney Ascher’s Room 237 and how it channels the obsessions over Kubrick’s The Shining that five film critics have into a provocative and new form of film criticism. A large part of the methodology used by these five cinephiles can be labeled as a unique form of film criticism, Immersion Criticism, where the critic steeps him or herself deeply in the text by watching it many times to the point where one’s perception on the object changes. I have had a similar experience with certain classic or canonical films that I happen to teach regularly and hence have watched many, many times. In such cases, especially if it is a conventional narrative, my viewing interest in the film is not plot or story but something that I can isolate and enjoy without the prior knowledge of the plot. Where do one’s eyes wander when you watch a film you’ve seen many times and know the story inside out?

I have this experience every time I re-watch John Huston’s fantastic debut film, The Maltese Falcon (1941), which is also the first proper film noir. Aside from the tremendous script, which Huston claims was in large part taken from the Dashiell Hammett novel from 1930, and the dramatically effective use of the wide angle lens and tight framing, one thing that always keeps my interest is the stand-out cast and performances. Not only was this director Huston’s first film, but British actor Sydney Greenstreet’s first film, playing the brains of the motley group of treasure hunters, Kasper Gutman. Greenstreet’s large frame offers a deft contrast to his delicate way with words and near effeminate body moves. Austria-Hungarian actor Peter Lorre was already a veteran of German, England and American film, most notably in M, The Man Who Knew Too Much (1934), Mad Love and the Mr. Moto series, but he struck gold as the dandyish Joel Cairo. Lorre’s mannered performance is seen as Hollywood code for “gay”: he is always impeccably dressed, carries a cane for aesthetic purposes, goes to the theatre (we see a theatre ticket clearly as Spade goes through his wallet) and owns a perfume scented handkerchief. His performance runs the gamut from comic relief (especially his spats with Mary Astor’s Brigid O’Shaugnessy) to covert threat. Mary Astor’s performance as the duplicitous, compulsive liar with the potential to kill set the model for later femme fatales. 1941 was a key year for Humphrey Bogart’s career, as they featured him in two roles which would identify him forever and stand the test of time as two of his finest performances, Samuel Spade in The Maltese Falcon and the criminal Roy Earle in High Sierra. But the last time I watched The Maltese Falcon at some point my eyes began to wander around the frame, looking behind an actor, looking at the bottom of the frame, until something unusual caught my attention: an odd square pattern on one of the back walls of Sam Spade’s apartment. 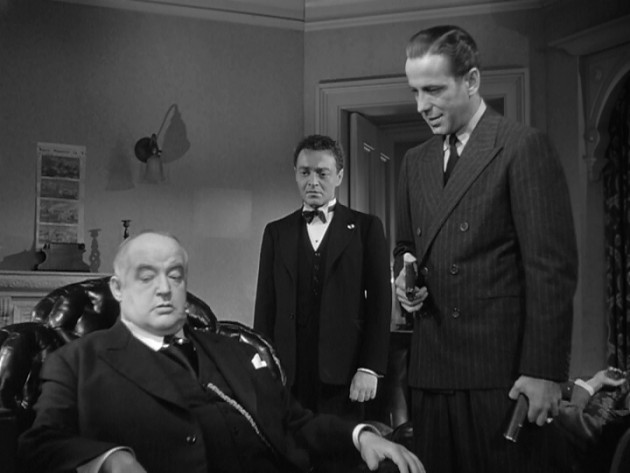 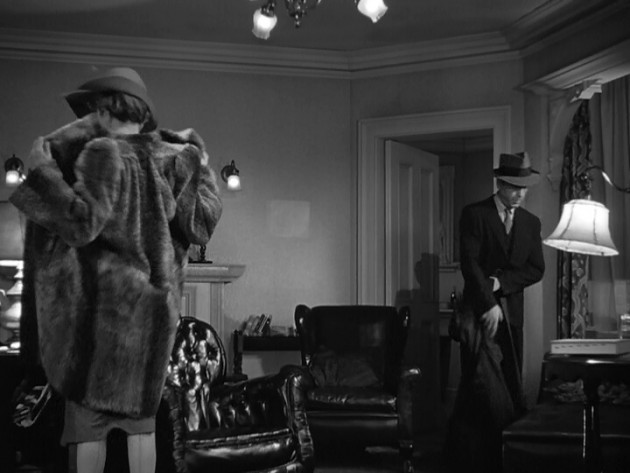 In the opening inter-title scrawl that gives us the back story to the infamous jeweled statuette we are told that the fate of the Maltese Falcon “remains a mystery” to this day. Behind this scrawl the audience is actually given a first view of the falcon, long before the characters make its acquaintance three-quarters into the film. I’ve seen this film well over a dozen times, and this last screening something odd caught my eye that, for all my times watching this film, surprised me and surmounted the diegetic mystery of the falcon as, at least for this screening, the film’s real mystery. There it was, in plain view, the imprint of a mysterious square on one of the back walls of Sam Spade’s apartment. But when I went back to the film at home (the screening was in a large theatre teaching class) I noticed that in other scenes in the same room the mysterious square was not there. Or at least it was not always visible in the same location space. 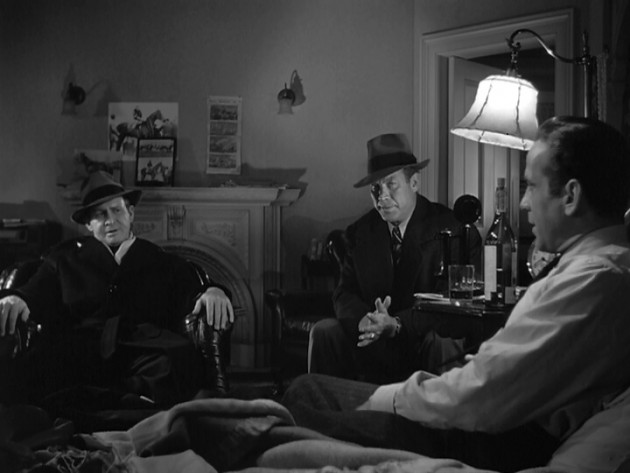 I had mentioned the square in passing to my class as I analyzed the scene in question where I first noticed the sqaure, when Sam and all the others are gathered in his apartment trying to negotiate the handing over of the falcon, which is in Spade’s possession (approximately 70 plus minutes in). One student suggested the square was the shaded imprint of a photo or painting that once hung there but was removed. The student pointed out that Sam Spade, being a bachelor, probably does not wash his walls ever, and this could account for the imprint on the wall where a painting or photo once hung. This made sense since just to the (screen) left of the square we see a mantelpiece with many photos resting on it (maybe the detective diploma we see on his office wall?). But the ‘painting on the wall’ theory fails because in other shots the square is not visible. At 11 minutes in the scene where the two detectives visit Spade to ask questions we see the wall but without the square. If it was an imprint caused by a removed painting it would always be visible.

A second noted possibility was that the square was a reflected shadow from the table lamp we see across the room from the wall (usually framed on the right lower edge of shots). This too makes perfect sense, until I checked other instances and noted that the square is still there, albeit fainter, in shots where we see the lamp is off. For example, at 35 minutes during the scene between Cairo, O’Shaughnessy and Spade, the lamp is on and we see the shadow square. But during the later scene at 70 plus minutes the lamp is off but the square is still visible, if fainter. And near the end, at approximately 89 minutes, after they discover the falcon is fake, it is daytime with sunlight blaring into the room and the square is still visible. 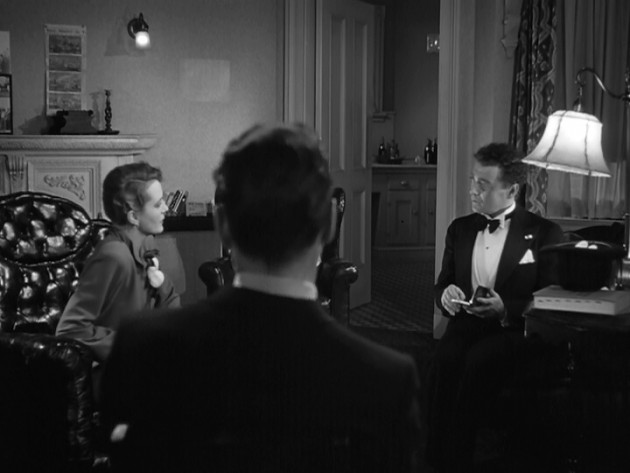 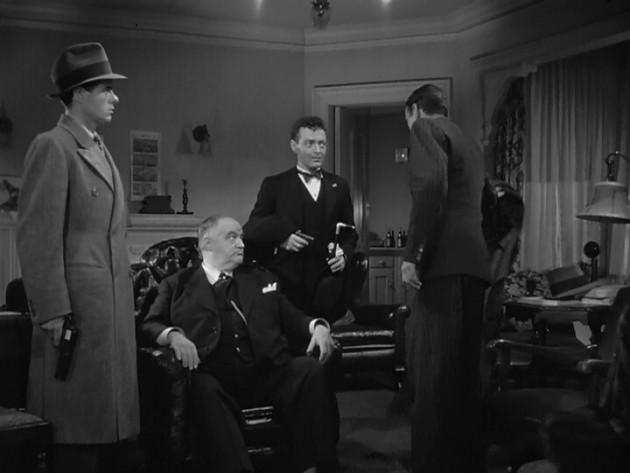 Lamp is off at 73 minutes, but square still visible, if feintly 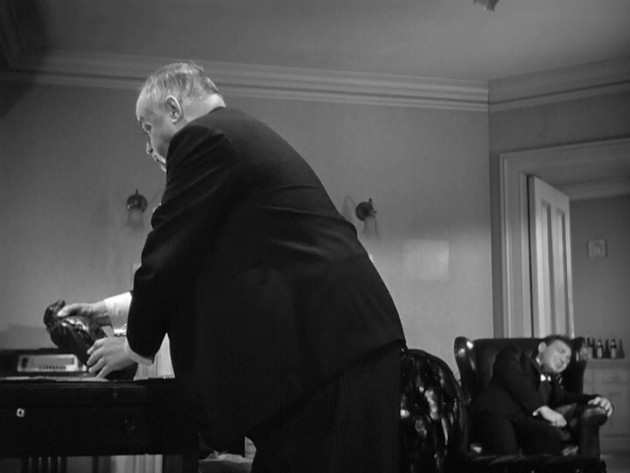 Daytime, at 89 minutes, yet square is still visible

And for a second strike against the theory of the lamp light, in some scenes where the lamp is on, characters pass in front of the lamp, without causing any change in the presence or shape of the square. If it were being caused by the lamp’s light reflected onto the wall then the square would disappear briefly or show an altered shape when the light source is blocked. Which brings us back to….square one. A reasonable solution is to accept the lamp as the source of the square and lay the blame Huston’s continuity team. But then the fun would stop there! 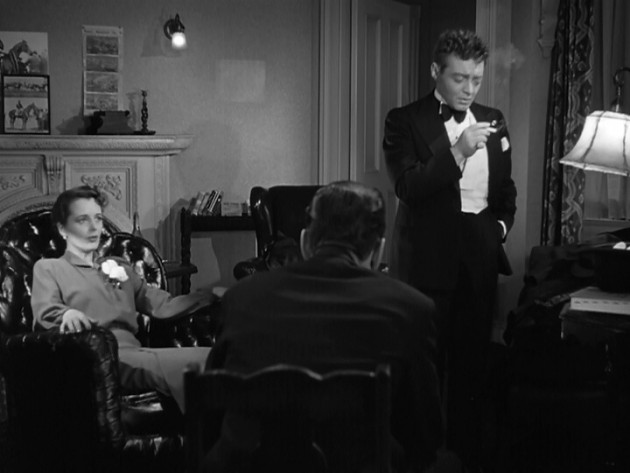 Cairo walks past the lamp, but square is unaffected by his corpse

I prefer to keep the square on the wall as the real mystery of the film and not, as the inter-titles state, the falcon. And speculate on what the square might mean, as a form of critical diversion (I can’t really expect other people to find this as oddly fascinating as I do, or accrue any real significance to it). In one scene Spade is sitting in a chair with his back to the camera in the foreground (photo above), and the square lines up almost perfectly with his head. There is no way Huston or the cinematographer did not notice the square. So why did he leave it there? Could the square be some type of analog to Spade’s mind, which is always working, whether we ‘see’ it working or not?

Obsessing over this square made me wonder about other related aspects, or other ‘inconsequential’ things visible in the background. For example, what are we to make of the ludicrous composition that frames O’Shaugnessy’s head between two ceiling lamps that look like two down turned horns jutting from the sides of her head? Another visual pun on the part of Huston and co.? 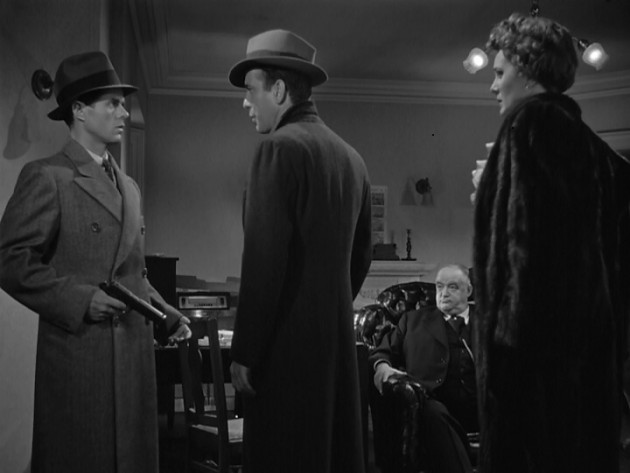 And why are nearly all the photos or paintings we see in Spade’s apartment of horses? He certainly does not seem like an equestrian. Could all the horse pictures be an in joke between Bogart and Huston? Or is it a sly reference to Sam Spade’s sexual prowess? 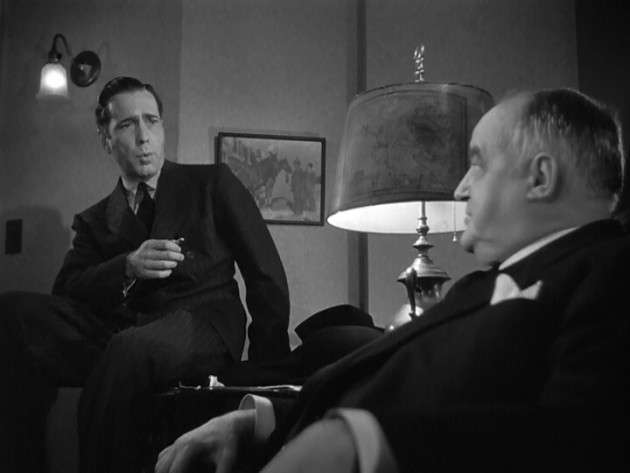 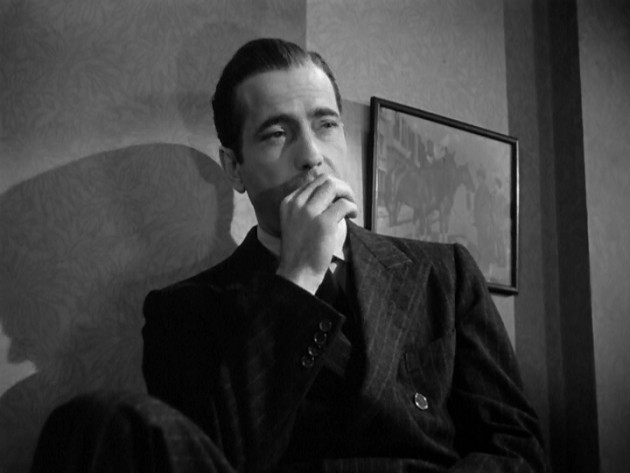 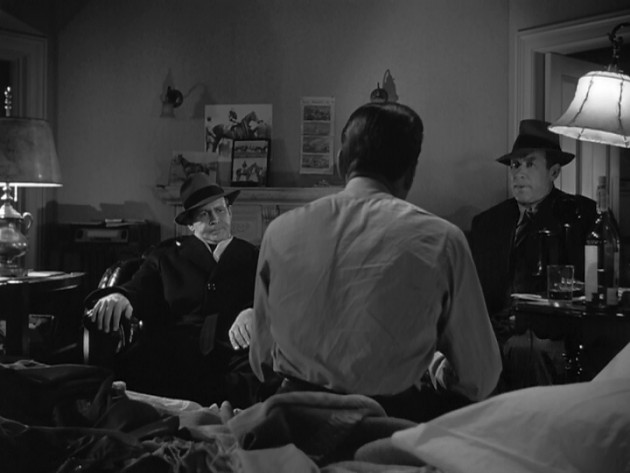 Or is it a veiled reference to Jean Renoir’s La grande illusion? 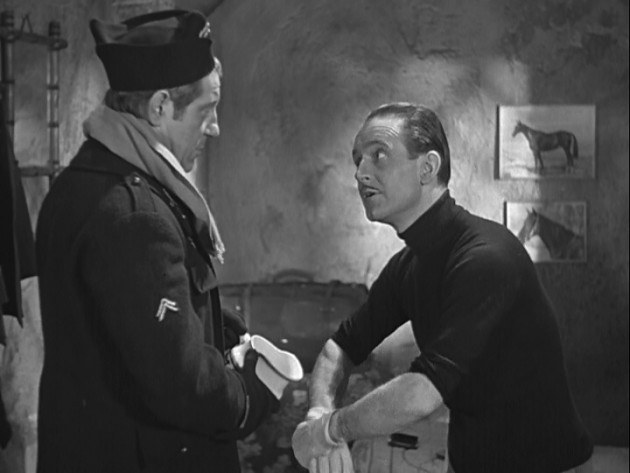 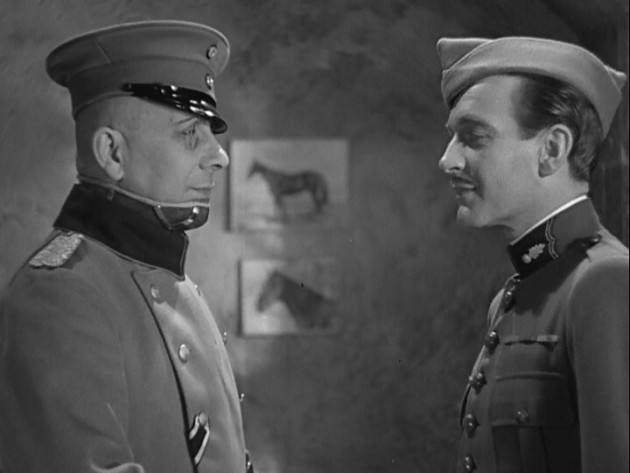 The plentiful images of horses made me think of the 1977 film Equus, which deals with a stable boy’s disturbing Freudian tinged obsession with horses, which has a parallel to the obsession that Gutman, Cairo and O’Shaughnessy have with the search for the falcon. And of course, Huston would later go on to helm the bio-pic Freud in 1962, starring Montgomery Clift as Freud. 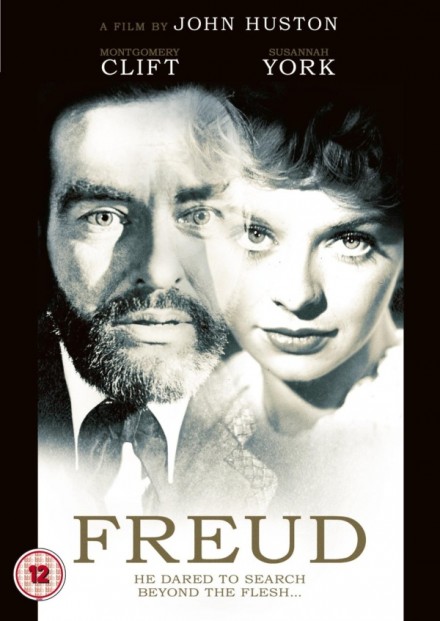 The mystery square egged me on to look closely at things in the background of shots, and noticed (also for the first time) that in the early scene where Spade goes to the location where his partner Archer was shot dead, we see a man leaning deathly still at his window framed in the deep background of a two-shot with Spade and Detective Tom Polhaus (Ward Bond). The window is cut off on the upper frame making it a perfect square. The figure is framed between them but closer to Spade. In fact the position of the window/square in relation to Spade is identical to the later shot in his apartment. The man also seems rather large. Could it be Gutman spying on Spade? 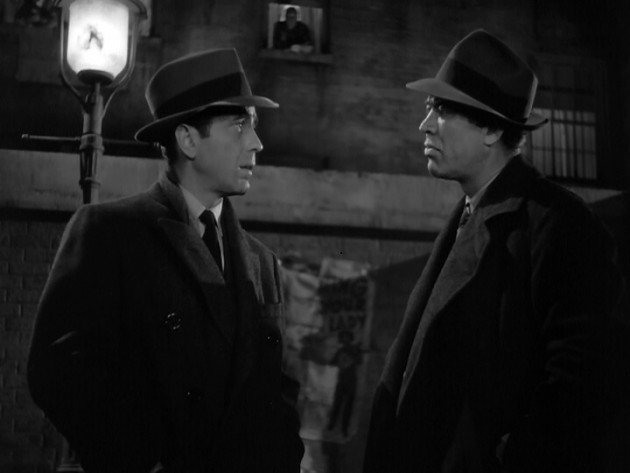 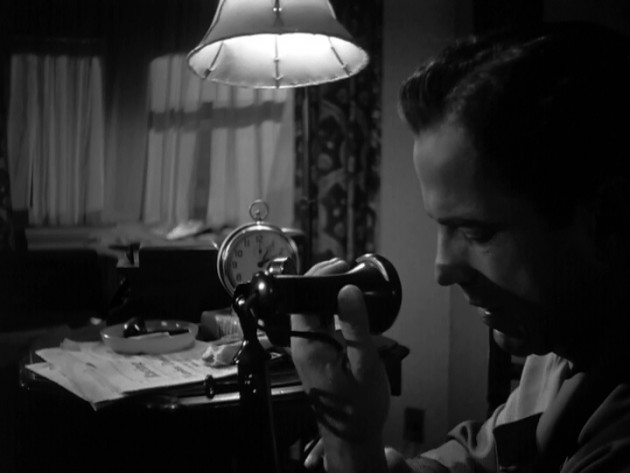 A hyper attention on the background walls reveals the important motif of the billowing curtain, which we see at key points in the narrative, either as a shadow or the curtain itself, always as a forecaster or signifier of the sinister and dangerous (of this motif I had been long aware prior to the ‘mysterious square’ viewing). In the iconic two shot of Archer and Spade at their desks after Brigid O’Shaughnessy leaves their office I was struck by how ‘boxy’ the composition was, with square objects, frames, sidings dominating the image (the windows, the file cabinet, the side of the desks, the chair opening, the certificate on the walls, etc.). 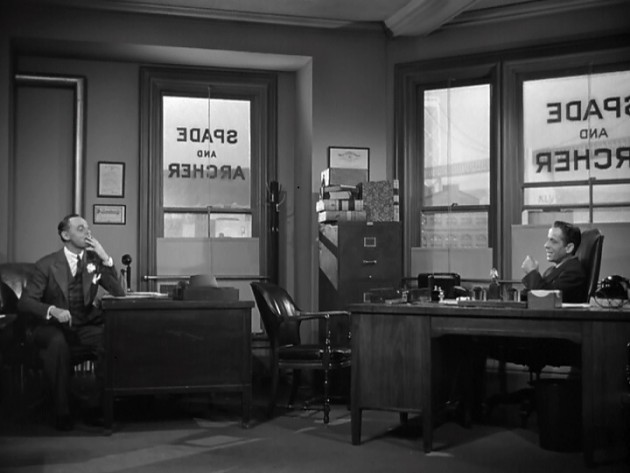 I have no final critical response to this visual oddity, other than it somehow fascinates me and prods me to reflect on what it might mean. Even if I know that there must be an inconsequential reason for its presence. In a university term paper I wrote on The Maltese Falcon some twenty odd years ago I commented in passing on how I found Brigid O’Shaughnessy’s hat to be rather silly. The professor who graded the work begged to differ and commented on how he quite fancied the hat. I find it peculiar that so many years later and the hat is of no interest to me, but that mysterious square shape mark on the wall is quite another matter.