Sunrise: A Song of Two Humans: Notes on the Screening of a Silent Film

1. The screening was presented by the Montreal Film Society/Cinéclub de Montréal. The President and founder of the Film Society, Philippe Spurrell, has been showing films from his personal collection of 16 and 35mm prints for over a quarter of a century in a variety of venues around Montreal. He currently shows films every other Sunday at Concordia University’s downtown campus, but also stages several additional “film events” every year, including twice yearly screenings of silent films at the Westmount Park United Church. The first of these was in October, 2012, with the unlikely (given the venue) double feature of horror classics The Cabinet of Dr. Caligari (1919) and Nosferatu(1922).

2. The Church in the Park, as it is popularly known, is a swell venue. Its setting among the greenery of Westmount Park makes it a popular choice for weddings, whether or not the couples belong to the United Church. I’m far from an expert on the various types of Protestants, but the United folks seem to combine a relaxed and friendly attitude about that sort of thing with a nice sense of tradition. So, along with its ecumenical approach to weddings, Climate Café offering vegetarian cooking classes, and varied community programs, there are also stained glass windows, plaques bearing the names of parishioners who died fighting in World Wars I and II, rows of pews that offer seating for up to 300 worshippers under a high, vaulted ceiling, and a vintage Casavant organ. The movies are projected on a screen set up above the altar and the show generally doesn’t start until the sun has set and light no longer streams through the windows. It’s not an obvious place to show movies, but it works beautifully. The acoustics, as might be expected in a well-designed church, are excellent. 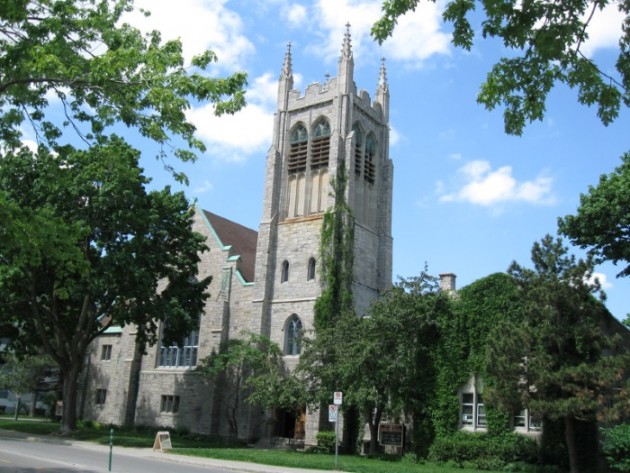 The outside of the Westmount Park Church

3. Spurrell argues that the setting and architecture evoke a bygone era in the same way that the films do. Similarly, his insistence on showing only 16 and 35mm prints, even if there are higher quality Blu-Rays of the same films easily available, is part of the event’s appeal. The stately period décor functions in much the same way as the occasional imperfections or reel change marks in the film prints: they are markers of authenticity and very much a part of the reason that a whole lot of folks who wouldn’t watch a silent film on television are willing to pay to watch one while sitting in a wooden pew for a couple of hours. It’s not just a film screening they are attending, it’s an experience.

4. Plus you can buy beer and popcorn. There is an undeniable transgressive pleasure in sipping a beer and munching on popcorn in a church.

5. Silent films are often shown at 24 frames a second, which is the standard for sound films, but silent films were shot at anywhere between 12 and 40 frames per second. One reason many find movement in silent films unnatural or jerky is that they are watching them at the wrong speed. Spurrell projects the films himself, not only making sure the frame rate is correct, but allowing some room for experimentation. For example, in a screening of The Hunchback of Notre Dame (1923), he increased the projection speed for the climax. It went over very well, so I wouldn’t be surprised if there were projectionists in the 1920s who did the same.

6. There was an opening short film before the main event. One thing that must be said about Spurrell’s film events is that there is always an effort to give the public more than they expect. In this case, it was the 20-minute Charley Chase comedy His Wooden Wedding (1925). Chase is rarely mentioned in the same breath as his contemporaries Chaplin, Keaton, and Lloyd, but his best work is easily as funny as anything they produced, and His Wooden Wedding features Charley very close to his peak. The audience certainly loved it, easily accepting the absurd premise (a groom receives an anonymous note from a romantic rival stating that his bride-to-be has a wooden leg, which she doesn’t, and chaos follows) and laughing increasingly loudly at the string of brilliant gags. Chase’s knockabout, absurdist humour isn’t the most obvious introduction to a film as somber as Sunrise, but I can’t say I heard any complaints.

7. Spurrell introduced Sunrise as “the last great silent film,” which it isn’t. 1 But it is important, arguably the film most responsible for bringing the German Expressionist style to Hollywood. It’s not that it was a huge box office hit at the time, but it was one of those films that impressed people in the industry, which is reflected in its winning for “Best Unique and Artistic Picture” at the first Oscar ceremony and its influence on Hollywood filmmakers, notably John Ford. 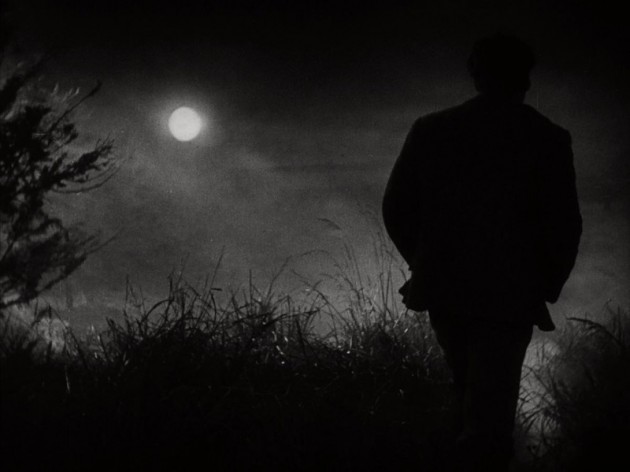 8. Spurrell also asked how many in the audience had already seen Sunrise, and, although the church was packed, less than a dozen hands went up, so he is clearly doing the Lord’s work.

9. As is well known, silent films were rarely really silent, and they were usually accompanied by live music. The Film Society carries on this tradition, always recruiting top notch local musicians to accompany the films screened. The musicians on this occasion were André Castenon, who played piano for His Wooden Wedding and manned the vintage ship bell for Sunrise, and he was joined by Guillaume Martineau (piano and organ), Jean-Félix Mailloux (cello and bass), and Aurilièn Tomassi (clarinet) for the feature. They did a terrific job, particularly during Sunrise‘s climactic storm, with the vintage organ providing the necessary thunder as the boat capsizes.

10. It is difficult to overemphasize how central live music is to the experience. Spurrell picks Ben-Hur: A Tale of the Christ (1925) as his favourite of the Film Society silent film presentations, largely because of how good a job the musicians did in bringing the film to life. In particular, he singles out the way percussion was used to first create and then build tension and excitement during the film’s famous chariot race. 2

11. I should mention the audience gave Sunrise a sustained ovation at the end, followed by a buzz of excited chatter. How many members of the audience would have the same reaction watching even a pristine transfer of the film at home on a Blu-ray with a soundtrack?

12. Spurrell and his team of eight volunteers put on a show at reasonable prices. Screenings in the past few years of silent films such as The Man Who Laughs (1928) and the restored Metropolis (1926) at Place des Arts had ticket prices up to four or five times higher than the Film Society, and in an arguably less interesting venue. The money raised from ticket sales pay for the presentation and expenses throughout the year that keep the Cinéclub/Film Society running. The proceeds from the rent and snack bar sales (including beer) go to the church, much of it for the upkeep of the Casavant organ.

13. A possible future screening is the Douglas Fairbanks swashbuckler The Black Pirate (1926) in two-strip Technicolor.

14. I’m a sucker for this sort of thing, and some of my favourite film experiences have been watching silent films with live music. Among the most memorable were seeing The Big Parade (1925) accompanied by the London Symphony Orchestra (the pounding of a single, ominous drum accompanying the soldiers as they march through no man’s land), a jazz combo playing behind The Docks of New York (1928), a five-piece Australian band elevating the creaky Aussie melodrama The Sentimental Bloke (1919) to something resembling classic status, and the previously mentioned Film Society presentation of Ben-Hur. Sunrise is a remarkable film, and this is as close to the optimum way to see it if you possibly can. Which makes the evening another great movie memory. The Lord’s work, indeed. 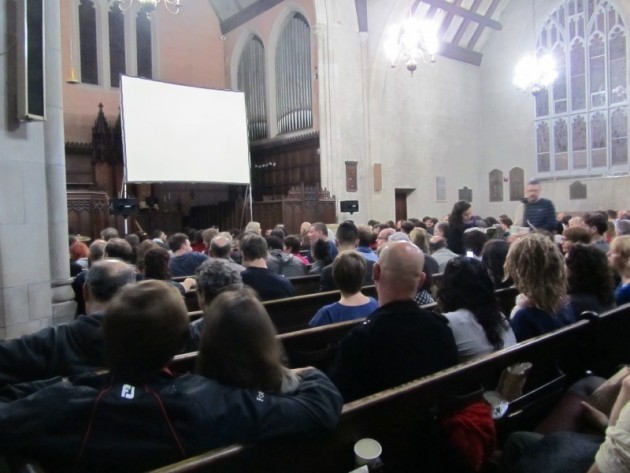 Inside a Westmount Park Church screening

Full disclosure: I have been a friend of Phil Spurrell’s and a semi-regular attendee at Film Society events since the mid-90s. And my sister got married at that church.