The world is composed primarily of ordinary people. Average Joes (and Janes), dreamers, survivors, and drifters. People trying to make a living, while attempting to carve out a niche or leave behind some form of pedigree before their life’s allotted sand glass runs out. Mainstream and big-budget cinema rarely single out these millions, preferring bigger than life heroes/heroines, antiheroes, eccentrics, and success stories. In Hollywood movies characters move forcefully and determinedly toward their goals, rarely giving evidence of the doubt and uncertainty which plagues society’s ‘foot soldiers.’ A low budget ($45,000), Quebec made short by Columbian born director Diego Briceño-Orduz gives us a poignant snapshot of just such people, thirty-something asthmatic truck driver J.D. and ever optimist soda pop waitress Alex. The troubled couple are played with a blend of intensity, honesty, and humor by husband and wife actors John Vamvas and Olga Montes. The digital film, shot on location in Sherbrooke, the Eastern Townships, and Montreal east, opens with J.D. lifting his stiff body from a side road slumber after a bender, muttering the words, “I want to have a baby.” As he walks along the highway, looking like a lone urban cowboy, we hear a flashforward voice-over of his jittery phone conversation with Alex. Alex and J.D. have a history, a one night stand or perhaps a brief romance, narratively tied together by the cheap motel room where they first made love, and where the film’s titular painting “Playa Perdida” hangs. 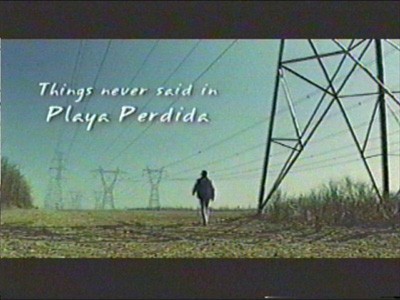 Apparently, J.D. has forgotten where he left his rig, and calls Alex to ask for a second chance. Against her better judgment, and driven by her powerful desire for a child, Alex agrees to meet him (in a nice symbiosis between life and art, actress Montes was 4 1/2 months pregnant during the shoot). The next twenty plus minutes gives us an elliptical gaze into the next twenty-four hours of J.D. and Alex, as they meander about trying to decide where they should conceive their baby. Will things work out? Is J.D., who already has one abandoned child, really ready to settle down and raise a family? In short, do people ever really change? The script is clever enough to leave things wide open, but provides enough visual and aural clues to suggest that things may not change for Alex and J.D.

The central strength of Things Never Said in Playa Perdida is its successful marriage of realism (from the powerful performances of the two leads) and symbolism (the expressive and connotative use of landscape and location). The film begins by immediately placing us into J.D.‘s drunken psyche with a huge close-up of his eyes. Which cuts to a moving, wide angled point of view of a bright sky pierced by cone shaped electrical towers. The shot immediately sets up a visual contrast between nature and industrial technology which is a constant throughout the film (we see contained nature in the shape of the electrical towers, the damn, and the steel musical cricket). Early into the film we get a long shot of Alex and J.D. driving along a road. As the vehicle exits frame right the camera lingers just long enough on the perspective lines formed by the adjoining road, parallel train tracks and three large silos. The image, geometrically interesting in its own right, lasts just long enough to suggest the landscape’s own formal autonomy from the human story. The horizontal and vertical clash of electrical towers, industrial plants, silos, power lines, and poles is a constant presence throughout the film. But at the same time the industrial landscape, ugly and strangely beautiful, also acts to sensitize us to the emotional elements “left unsaid” between J.D. and Alex. 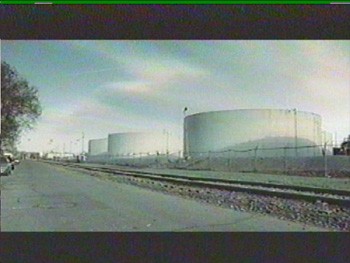 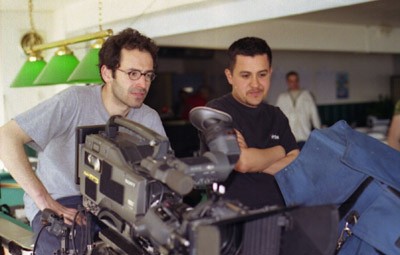 In this latter sense director Briceño-Orduz uses locations and art design to underscore theme, while invoking an atmosphere of an economically disempowered urban wasteland. For example, when J.D. and Alex first speak they are filmed through glass barriers, J.D. from inside a phone booth and Alex through an ice cream shop storefront. The enclosed spaces and physical barrier around and between them suggests emotional entrapment, but also the way J.D. and Alex ultimately hide their true selves from each other (and us). Soon after they meet, J.D. leaves Alex waiting at the motel room while he gets drunk at a local bar and pines for a waitress named ‘Cookie.” Briceño-Orduz captures Alex’s isolation and frustration with a 360 degree pan of her pacing the motel room. The shot begins on the painting above the night table, pans left around the room, and ends on the night table, where we see Alex pick up her car keys. J.D. gets thrown out of the bar, and slumbers back to an empty motel room. The structure of this minute plus shot, filmed in one take and in medium to long shot range, allows actor Vamvas the physical space to articulate J.D.‘s extreme drunken state. Playing drunk is always a challenge for an actor, especially in a dramatic context, but Vamvas plays it deliciously. J.D. leaves the motel in search of Alex and finds her in contemplation overlooking a huge water damn.

Alex seems continually drawn to the water plant, in part because this is where she was conceived. Water, with its connotations of rebirth and fertility, can also be a subconscious draw for the baby-starved Alex. In the film’s most intimate moment, a seemingly repentant J.D. gives Alex a small Chinese music box containing a bronze chiming cricket. During this scene J.D. seems genuine in his feelings toward Alex and his desire to be with her. But J.D. is reminiscent of the scorpion who promises the frog that he will not sting him if he carries him across the pond, arguing that to do so would mean his drowning, but then stings the frog anyway, because it is “in his nature.” Likewise J.D. seems genuine now, but maybe drifting is simply “in his nature?” The intimate moment concludes with another long take, a hand held camera that closely encircles the couple as they express their inward desires. J.D. asks Alex, “You still love me a little, huh?” To which she replies a monosyllable, “huh.” (The meaning of this utterance will become more apparent in the final scene.) During the embrace Alex throws J.D. an aggressive kiss that punctures his upper lip. The all-too convincingly played gesture encapsulates the love/hate feelings Alex must have for J.D., and perhaps some self-loathing for desiring such a hapless man. 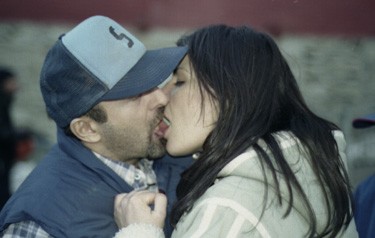 Director Briceño-Orduz interrupts their most intimate moment with an Antonioni-esque cut to an extreme high angle, long shot of the couple barely visible within the huge expanse of the damn waters. The shot not only re-establishes the importance of the landscape, by allowing the sound of the tumultuous waters to stand in for their passion, but hints at the emotional gulf that may in fact keep J.D. and Alex from ever consummating a lasting relationship. The invocation of the great Michelangelo Antonioni is not meant as a burden to the young Briceño-Orduz. The cinematic heights which Antonioni reached are indeed rare, it would not be fair to compare any young filmmaker to him. But Briceño-Orduz is smart enough to know how to incorporate this inspiration into his admittedly smaller design. In conversation with Briceño-Orduz I mentioned that his film reminded me of Red Desert, and he happily acknowledged the influence of that film, especially its use of color. For example, Briceño-Orduz used the shot of Alex standing in front of an industrial plant (see below) to adjust the film’s color tone (remove saturation), and Red Desert to adjust the color correction for the whole film. 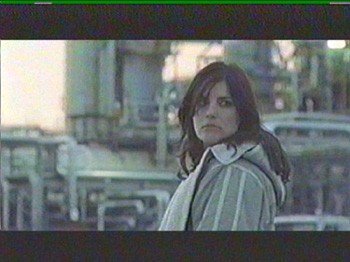 In fact the ‘pinkish’ sand we see at the end in the beach setting of the painting “Playa Perdida” is an homage to Red Desert (the pink sand from the fantasy story Giuliani recounts to her son). 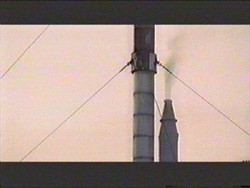 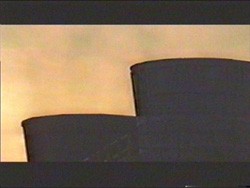 It is this painting, specially made for the film by local artist Gene Pendon of Heavyweight House, which provides the film its part escapist, part huis clos ending. After the night scene at the damn the film moves to its final scene at the two-bit motel. The scene dissolves from the rough damn waters to the motel room window. It is the morning after the evening spent together. The camera films J.D. through the window looking intently into space. J.D. appears strange to us, sober for the first time in the film. With the thoughts that are probably going through his mind the expression on J.D.‘s face can be read in a Kuleshovian sense: fear of domestic and parental entrappment. 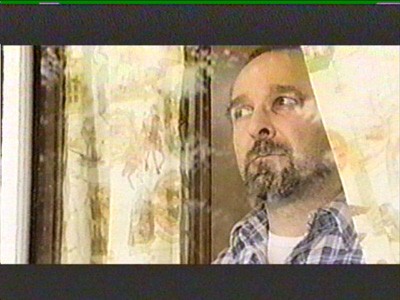 
The scene cuts to the inside of the motel room. Alex is lying in bed, relaxed and content. The subtlety of the film’s script is in evidence in these final moments. While rubbing her belly she happily tells J.D. “I think it happened…I feel it happened.” The scene cuts to J.D. standing quietly outside the bathroom, fiddling with his inhaler. He seems unmoved by her happiness, but instead withdrawn. When asked several times what he is thinking about, he catches Alex and us off-guard with his strange reply, “I …just want to know how you want your eggs?” Recalling what is probably on J.D’s mind — Alex’s possible pregnancy, fatherhood, commitment, baby — the meaning of the word ‘eggs’ takes on another context. As J.D. prepares to leave, the scene cuts to a close-up of a worried looking Alex: “J.D. you’re coming back, huh.” J.D. replies in the same way Alex did when he earlier asked if she still loved him: “huh.” The monosyllable ‘huh’ becomes an emotional catchphrase for all things ‘left unsaid.’ It becomes a stand-in response to all of life’s difficult questions and ambiguities. “Huh” demonstrates how, even at the best of times, we are sometimes unable to express ourselves truthfully. It is this sincerity and honesty with respect to human relationships and human emotions which sets Things Never Said in Playa Perdida apart from the usual love story. The film offers us two characters whose weaknesses and flaws, while not commendable, ring true to our sense of everyday reality. But, to his credit, director Briceño-Orduz refrains from moralizing or condemning these characters.

The film began by placing us into J.D.‘s psyche with the large close-up of his eyes, but leaves us in Alex’s world. With J.D. gone, she lights a cigarette, an inappropriate gesture if indeed she is pregnant. She stares off-screen at the painting hanging above the bed, and whispers the Spanish words: “Playa Perdida.” Since this is the room where they first made love, ending the film here can signal a negative circularity: Alex doomed to repeat her earlier mistake. However, the film does not end in the room, but takes us literally into the world of the painting. The camera pans right from Alex looking, to what she is looking at, the painting. It cuts to a closer shot of the painting then slowly zooms into a name written on the side of a boat, “playa perdida.” Playa perdida is Spanish for lost beach, and perhaps a metaphor for lost dreams and disillusionment. But as the camera explores the inner world of this simple painting, it subtly comes to life, engendering a sense of hope through the sensuous beauty of its colors and sounds. For while things may not work out for Alex and J.D. in reality, there is always Playa Perdida. 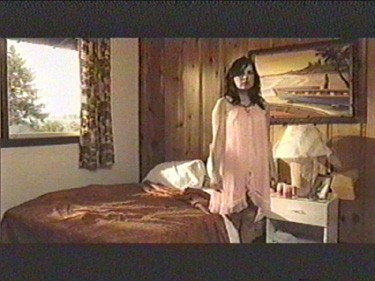 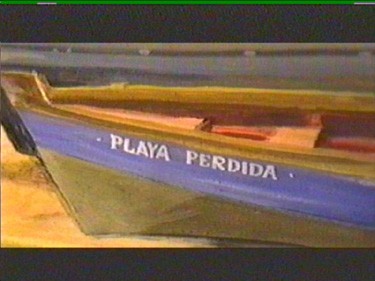 Things Never Said in Playa Perdida plays at the Rendez-vous du Cinéma Québecois one time only on February 19 at 7:00pm