Play: Reimagining film, or, Towards a New Pedagogy of Film Studies

play |plā|
verb
1. [ no obj. ] engage in activity for enjoyment and recreation rather than a serious or practical purpose: the children were playing outside | her friends were playing with their dolls.
• [ with obj. ] engage in (a game or activity) for enjoyment: I want to play Monopoly.
• amuse oneself by engaging in imaginative pretense: the boys were playing cops and robbers.
• (play at) engage in without proper seriousness or understanding: stars who play at being ordinary.
• (play with) treat inconsiderately for one’s own amusement: she likes to play with people’s emotions.
• (play with) fiddle or tamper with: has somebody been playing with the thermostat?

2. [ with obj. ] take part in (a sport): I play softball and tennis.
• participate in (an athletic match or contest): the Red Sox will play two games on Wednesday.
• compete against (another player or team) in an athletic match or contest: the team will play France on Wednesday.
• [ no obj., usu. with negative ] informal be cooperative: he needs financial backing, but the bank won’t play.
• [ no obj. ] be part of a team, esp. in a specified position, in a game: he played shortstop.
• strike (a ball) or execute (a stroke) in a game.
• assign to take part in an athletic contest, esp. in a specified position: the manager will want to play the right-handed Curtis.
• move (a piece) or display (a playing card) in one’s turn in a game: he played his queen.
• bet or gamble at or on: he didn’t play the ponies.

3. [ with obj. ] represent (a character) in a theatrical performance or on film: she played Ophelia.
• [ no obj. ] perform in a theatrical production or on film: he was proud to be playing opposite a famous actor.
• put on or take part in (a theatrical performance or concert): the show was one of the best we ever played.
• give a dramatic performance at (a particular theater or place).
• behave as though one were (a specified type of person): the skipper played the innocent, but smuggled goods were found on his vessel.
• (play someone for) treat someone as being of (a specified type): don’t imagine you can play me for a fool.

5. [ no obj. ] move lightly and quickly, so as to appear and disappear; flicker: a smile played about her lips.
• (of a fountain or similar source of water) emit a stream of gently moving water. 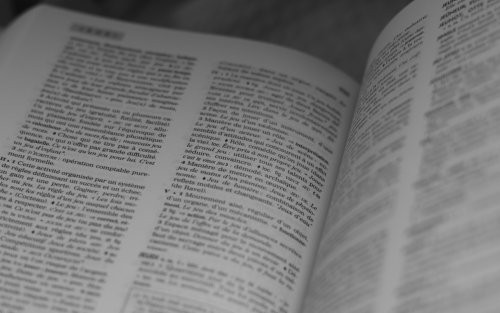 With video—from VHS to digital files—we are able to play with the presentation, even if we cannot affect the content itself. We can engage with video, on a temporal level, much differently than we can film: we can stop a video, when stopping a film projection could harm the filmstrip; we can pause a video, when, without a specifically designed projector, pausing on a frame would potentially burn the filmstrip; we can alter the speed of a video, rewind and fast forward, skip through, and instantly replay a section of video, when any such movements would be ill advised for a film unless you have an analysis projector. As such, it may seem reasonable that the idea of play has been omitted from filmic discourse: as an audience, and even as a projectionist, we have traditionally had limited engagement with the performance of the filmstrip.

In traditionally, dominant cinema practices, that is.

Of course, the idea of playing film has an extensive history within the avant-garde. Pierre Hebert, who is in the audience, began to actively play the filmstrip in live performances in the 1960s. Karl Lemieux, Bruce McClure, Sandra Gibson and Luis Recorder—to name a few—actively play film as part of their artistic practice. Expanded cinema filmmakers—from Bruno Corra and Arnaldo Ginna in the 1910s to, perhaps most famously, Anthony McCall in the 1970s—have created films that play with the projection space of cinema. These approaches to the filmstrip and the projector—as instruments for creative production rather than objects that store and amplify representations—completely shift the activity and temporality of film. No longer is the act of projection about passively showing a film. No longer is the projection of the film about the representation of another place, and elsewhere that exists at the site of inscription. Instead, the liveness and the embodied space of the projection are emphasized. The projection itself becomes a dynamic creative act. 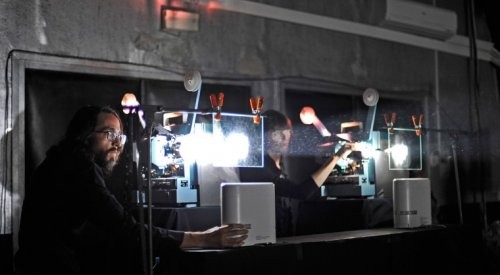 Let me be clear: I am not suggesting that playing a video is inherently more engaged and engaging than viewing a film. Rather, that the discourse around these media has helped to ratify how we engage with them and think about them. This is where the idea of play becomes an issue of pedagogy. Thinking about difference between the discourse of film and video will allow us to reimagine film beyond dominant historical practices and definitions of cinema and the cinematic, outside of the culture of fear that has been attached to “the death of film,” and within a new paradigm based within the fine arts and extending from the engagements of avant-garde practices. 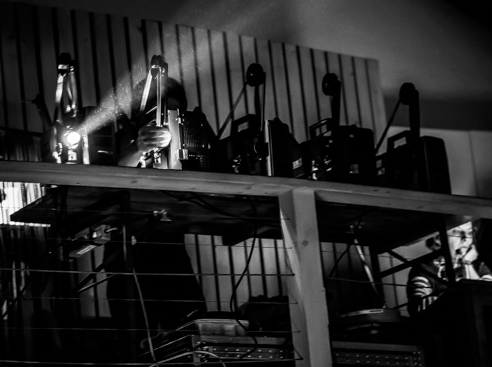 Karl Lemieux in performance with Michaella Grill and Philip Jeck (2015)

The idea of play, the idea of re-imagine film production around play allows us to actively think about new ways of engaging with what is (possibly) becoming an obsolete media. Rhetoric around “the death of film” is not new, but with the decrease in film stock manufacturing (with Kodak producing less and less stocks, Fuji halting production of camera and print film stocks, and AGFA producing only a few different stocks) and the almost complete transition of commercial cinema exhibition to digital, the idea of film—the way it has been historically and culturally conceived—is certainly shifting. While the commercial side of cinema moves away from film exhibition (while sometimes maintaining the use of film camera over digital cameras), the idea of play returns the importance of exhibiting on film. Play reframes the discourse of film around the interaction between the artist and audience through the act of projection. Playing with the filmstrip, or playing the projector as an instrument of live cinema transforms not only the idea of “film” but the material condition of the filmstrip from a dead-past to a live-presence. Our focus is no longer on an “elsewhere” presented on the screen, but the live, embodied space of the projection itself. Play, in this sense, transforms the dialogue away from technological uncertainty (where we, as filmmakers, living in a culture of fear, worry that the medium itself will no longer be available to us, start to stockpile filmstocks) towards a creative potential of discovery: towards new possibilities presented only after film’s commercial obsolesce. In the nineteenth century, a similar culture of fear surrounded painting because of the ubiquity of the new technology of photography. Walter Benjamin talks about this at length in “A Little History of Photography.” While photography did not “kill” painting, it did allow for new content and new perspectives to emerge in painting beyond realistic representation. Digital video, I’m suggesting, allows for the same kind of re-imagining of photochemical film. And this transformation—ideological, pedagogical, and practical—can begin by thinking about play. 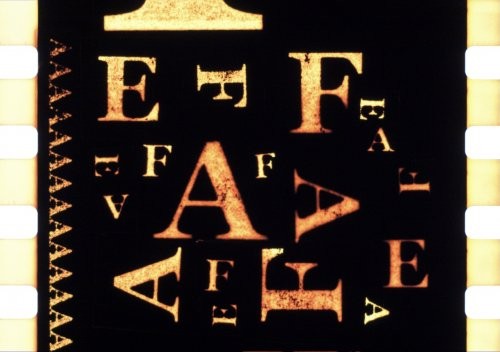 This is what I try to do in my classroom: to play.

This article was originally published as a French translation on our sister magazine Hors Champ on May-June 2016: http://www.horschamp.qc.ca/spip.php?article639