Two spaceships receiving alien distress signals crash land, under mysterious circumstances, on the stormy planet in question… leading to some really weird stuff starting to happen. Despite the American-distributor AIP imposed title, no one actually becomes a vampire, but don’t despair, as there is a lot of death and crew members turning into alien-possessed ghoul-like creatures to recommend.

While the clumsy, rubber monster fun of the second feature It! The Terror from Beyond Space watched in our triple-feature of “films that inspired Alien” revealed itself to contain a similar narrative backbone to the 1979 Ridley Scott masterpiece, to be fair, it’s a fairly simple, generic genre construct (super-human monster in deep space, picking off crew members one at a time) and the creativity and cleverness between the executions of the two films are millions of desperate space miles apart.

In the case of the profoundly evocative and atmospheric Planet of the Vampires, however, a film that just continues to grow in admiration for me every time I see it (as does so much of director Mario Bava’s work — I’d say even his Hercules film, Hercules in the Haunted World — another one of those films I’ve heard in a recent screening that the ignorant hipster hyenas ruined with their ignorant cackling, with any recognition of, or appreciation for, the triumphant creation of a brilliant expressionistic landscape over a lack of anything approaching an appropriate budget on display before their eyes sailing way over their hyena heads — should be recognized as a wonderful work of art), I would be hard pressed to believe that Alien screenwriter Dan O’Bannon and director Ridley Scott in guiding the production design weren’t deliberately channelling major components of this film. Okay, perhaps not the leather-based skin tight 60’s cool space suits (which still work within the no-budget expressionistic world of the film) or the ghoul/possession story, but with other major visual and narrative elements, such as the hostile environment of the planet itself as our crew members explore it, to the discovery by our investigating crew of a derelict alien spaceship with the massive skeletal remains of a long dead giant creature (and, let there be no doubt, the enigmatic dead creature here is as deeply evocative as the classic space jockey in Alien), to other details such as the alien spaceship having a similarly designed circular entry portal, and the narrative conceit of the ‘distress call’ that ends up having been misinterpreted, I’m hard pressed to believe the similarities are just filmic coincidence. 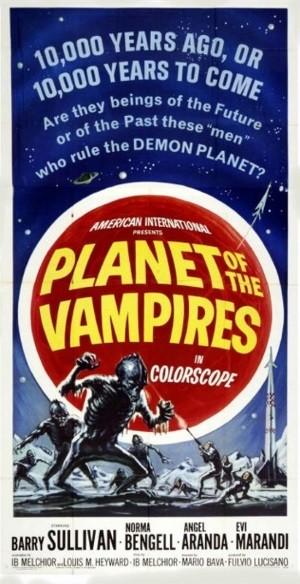 Not that any of this is a problem or feels like Alien is a rip-off. Each film works magnificently in its own right and comes across having considerably different agendas (as well as ultimately entirely divergent story lines). Alien is a big budget masterfully executed adult monster movie in a spaceship, while Bava’s film, guided by brilliant hands in overcoming an almost non-existent budget, is an expressionistic, abstract work of art.

The scenes within the spaceship, in which for instance Bava makes the large empty spaces look organically cluttered by putting important objects like the Meteor Rejector in the foreground, are just a few of the ways in which he reveals his abilities at composition. The visions of the hostile planet and the ‘massive’ interior of the alien derelict spaceship with their use of weird abstraction, extreme colored lighting (in that organic bleeding way familiar to anyone who loves Dario Argento’s later Suspiria) and crazy optical trickery, both obvious and yet somehow not quite, are masterful representations of expressionism (a friend pointed out to me how the multi-layered creation of the spaces and how the characters navigate through them makes the film come as close to a feeling of 3D as a 2D film can be). And the odd acting styles work perfectly (this must be the aging long time Hollywood character actor Barry Sullivan’s most memorable and treasured role, whether he knew it or not).

Beyond acting as a springboard for the modern classic Alien, Planet of the Vampires — and filmmaker Mario Bava — on their own are shining examples of what cinema has to offer.