Directed by Jean Yves Bigras, La Petite Aurore, L’enfant Martyre (1952) is one of the most important post-World War 2 Québécois feature films and, as such, is a real child of its time, directly speaking, the Maurice Duplessis era, when the Catholic Church and doctors ruled and where the power of authority was omnipotent. [1] The film is based on a faits divers from 1920 that happened in Ste. Philomène de Fortierville, the Gagnon Affair, in which a young girl was brutalized to the point of death by her stepmother. The event struck such a responsive chord with Québécois audiences that it has been in continuous adaptation in most mediums (theatre, novel, radio, television, film) from its first appearance as a stage play in 1921 (by Petitjean and Rollin) to this day (according to the bilingual website “Aurore: Mystery of the Martyred Child” a film is currently in production, directed by Luc Dionne, based on the 1990 novel by André Mathieu, Aurore: la vraie histoire). According to the above website, the play alone had over 5000 performances between 1921, when it debuted less than a year after the death of Aurore Gagnon, to the 1950s.

There have been numerous large and subtle changes made to the original incident across the many adaptations, but in the film the story is a follows. A twelve year old girl Aurore Andois (Yvonne Laflamme) lives on a farm with her father Théodore (Paul Desmarteaux) and sick, bedridden mother Delphine (Thérèse McKinnon). The mother is cared for by their widowed neighbor Marie-Louise (Lucie Mitchell). Marie-Louise, who has her own child, has designs on Théodore and quickens Delphine’s death by medication overdose. Aurore sees Marie-Louise’s treachery but says nothing. After Delphine’s death Théodore marries Marie-Louise, and Aurore is sent to live with her aunt. After a two-year hiatus a priest (Émile Asselin, alias Marc Forrez, who wrote the novel on which the film’s screenplay is based) suggests that Aurore return to live with her father and stepmother. Marie-Louis, terrified that Aurore will one day reveal her secret, and jealous of Théodore’s affections toward Aurore (Théodore tells Aurore how much she looks like her mother), Marie-Louis begins to routinely torture Aurore. The neighbor Catherine (Janette Bertrand) discovers what is happening and informs, not the police authorities, but the local priest. The priest investigates with the village doctor (J.-Léo Gagnon) but Aurore is already too weak and near death. After Aurore’s death Marie-Louise and Théodore are arrested. In the concluding court scene Marie-Louise, who continues to claims her innocence, is sentenced to death and the father Théodore to ten years of hard labor. 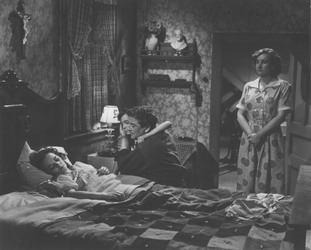 Delphine on her deathbed, with Marie-Louis on the far right

The present review is based on a viewing of the film in a restored 35mm print during the 2004 Les Rendez-vous du Cinéma Québécois. The screening of this wonderful 35mm print was blessed by the presence of the cinematographer Roger Racine, the actress who played the little girl, Yvonne Laflamme, and the actress playing the young newlywed, Janette Bertrand. The setting for the film is an historical period where the church and state were not separated as they would later become, and to solidify this point there is no hint of police authority anywhere in the film. The people who eventually discover the abusive behavior of the stepmother Marie-Lavoie are the priest and the doctor. As one of the film’s principals said after the film, at that time everyone wanted their son to be either a priest or a doctor, such was the reverence and power of those positions. The large, foreboding wooden cross that appears in the final court scene above the judge’s head dominating the frame leaves no doubt as to where the true authority lie in Québec society of the Duplessis period (Maurice Duplessis being the incumbent leader of the conservative Union Nationale Party, which governed Québec from 1936-1939, 1944-1959).

The film is shot mainly with a static camera, which gives way briefly in two shots during the final court scene, one being a dramatic, Dreyeresque low angle shot of the judge, with minimal shadows, symmetrical framing, and a sparse background. Cinematographer Roger Racine remarked on how wonderful the preservation of the print was and, with regard the film’s aesthetics, that the central direction for the film’s visual style was extreme (Bazinian) realism of the image: hence no make-up, no dramatic lighting, and no dramatic movements of either camera or actor. In fact the camera is static up until two dramatic movements in the final court scene: a quick dolly in to the judge, and a cut to a quick, high angle dolly back (crane?) from Marie-Louise as her death by hanging sentence is read. There are certain moments where the film strays from the ‘realism’ Racine mentions: the noted ending, and the scene where Aurore reveals the truth to the helpful neighbor. Here Aurore stares directly to the camera in a big close-up and the lighting is soft rather than harsh.

In the post-film question period Laflamme in particular talked about the most important aspect of the film being its revelation of child abuse, although they all admitted that there was no outpouring of discussion at the time because the event was seen as a singular case, and not a symptom of a larger problem. Which is why she believes that the current remake in-production is not superfluous, since the problem of child abuse, sadly, still exists.

As a performer Laflamme is rough in the first few scenes, but becomes more effective as she becomes the Christ-like martyr at the expense of her stepmother’s self-driven hatred. The Christ-like imagery is furthered when Marie-Louise forces Aurore’s head into a bush of thorns, which results in her hair being tattered and eventually sheared in a brusque manner. (In this condition she made me think of the martyred Mouchette in Bresson’s Mouchette, 1967). In the opening Aurore’s sick mother is being administered by the widow Marie-Louise, who doesn’t hide her malicious conduct. It is clear from the outset that her goal is to see Aurore’s mother, Delphine, die so she can marry Théodore. She slowly poisons her and holds back her medication, which eventually leads to Delphine’s death. At first the scenes between Aurore and her stepmother are played out in a creepy tension, with Aurore overstating her emotional distance by continually referring to her stepmother as “madame.” The father defers in everything to his new wife and believes all the lies she says about Aurore. Since Aurore was witness to Marie-Louise’s complicitness in her mother’s death, her very presence is a threat to Marie-Louis at every turn.

As the relationship between the newly formed family progresses Marie-Louis becomes more brazen in her attempt to intimidate and terrorise Aurore. Marie-Louis slaps Aurore, squeezes her arms, scalds her, forces her to eat soap, locks her in the attic, lashes her with a leather belt, and eventually pushes her down the attic stairs. As the coroner says after examining Aurore’s corpse, it is a wonder she survived as long as she did with the over 50 bruises and internal damage she incurred. 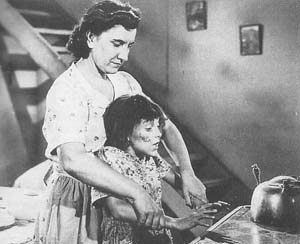 Unlike the film, where Marie-Louis is sentenced to death and Théodore to ten years hard labor, in the true case, the woman was given life sentence and the man was absolved of any wrongdoing. According to Québécois film critic Pierre Pageau, who was at the screening, the real father, Télesphore Gagnon, returned to his village a ‘hero.’ The change in the film suggests a social change, or a social point made by director Jean-Ives Bigras: that the father too has a role to play in the upbringing of children (he remains so detached from the everyday activity of his daughter that he is unable to intuit what seems obvious). Although the priest is benign and helpful, there is also an air of critique in the way he is represented. The priest remains somewhat aloof toward Aurore’s danger, and he himself recommends not calling the police but praying to God for help. Aurore dies anyway. 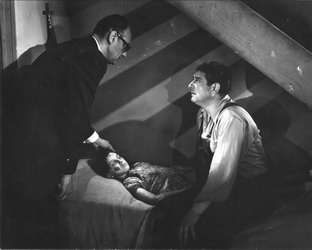 There is no doubt that the continuing popularity of the story, and its variations along the way, are a reflection of changes in Québec society. Taking his cue from Christiane Tremblay-Daviault’s study of Québec cinema of the 1940s and 1950s Un Cinéma orphelin, Joseph I. Donohoe Jr. writes, “In the process, she [Tremblay-Daviault] discovered, behind the pious chronicles of sin, guilt, and remorse, traces of the real evils affecting that society, i.e. political and moral repression. Thus, a spectator of the period responding emotionally to a film like La Petite Aurore l’enfant martyre (1951) did so because, as a member of the oppressed francophone majority, he felt a secret affinity with the sorely tried child of the film.” [2] The analysis may hold some truth for the original film, but what about the many adaptations which have taken place long after the noted social conditions of the Duplessis era (essentially, during the post-Québec Quiet Revolution liberalisation and political and economic empowerment of Québécois francophones)? I am not familiar with these other versions, but it will be interesting to see what tone the soon to be released version by Luc Dionne will take with regards social culpability. Stripped of its political currency, the story bares a streak of sadism/masochism not always apparent in popular Québec cinema. The one element in the film which remains a powerful thematic tool in contemporary Québec cinema is the importance of the family. Even with the increasing divorce rates and lowered child birth rates and institutionalized marriages in modern Québec, the family remains a dramatic narrative ideal in Québec cinema. In this respect La Petite Aurore, L’enfant Martyre makes an interesting companion piece to the film which introduced the “evil child” to cinema, The Bad Seed (1956, Mervyn LeRoy), largely because of the projected sense of an internal rot within the family core (and the stage origins of both), with La Petite Aurore replacing the “evil child” with the “evil stepmother.”

After seeing the film for the first time only recently, I would say that the only aspect which let the film down is the intermittent use of church/dirge organ music. Otherwise the film holds up well as both a marker of how far Québec has come since its status as a rural, authoritative nation in the Duplessis era; and as a rough, primal cry of childhood despair.