‘They’re coming to get you, Barbara!’
‘Stop it! You’re ignorant!’

‘Are they slow moving, Chief?’
‘Yeah, they’re dead. They’re all messed up.’

‘We may not enjoy living together, but dying together isn’t gonna solve anything.’

The besieged farmhouse with the rotted corpse at the head of the stairs. The bickering married couple with the sick kid in the basement. The stoic African American lead startlingly transgressing his social standings by brutally striking the hysterical white woman Barbara across the face to calm her down. The young, sweetly innocent couple whose very concern for each other will lead to their tragic fate. The rowdy rural gun-toting mobs, led by white authority, casually shooting down the threat, one bullet to the head at a time. And, of course, the mindless, stumbling zombies themselves, figures of decay, of human rot, representations of pure abjection (at least that’s what they are here – Romero would slowly delve into more complex territory with his monster of choice, exploring the nature of the zombie as outsider – and even sympathetic ‘other’ — through his five sequels). 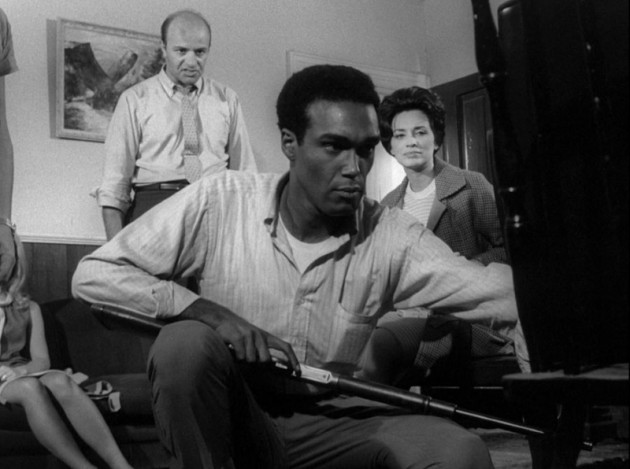 No longer the supernaturally reanimated corpses of Haitian folklore, mind you, but now (pseudo)scientifically-born; a new flesh-eating concoction straight from the fevered and bleak imagination of Pittsburgh filmmaker George Romero; the ‘destroy the brain and the body will die’ variety that hit the Western zeitgeist in a way that would, forever forward, with its Romero-defined rule book, be what modern audiences would think of as the zombie. Like the Twilight Zone theme, “Night” has imagery so profoundly indelible, so linked into our Jungian shared spaces, even those common unfortunates who don’t understand horror know of this film, and what it has meant to the culture.

From today’s perspective, it’s easy to see Romero’s film, made during a time of massive social upheaval in North America (as well as around the world), with boiling over civil rights unrest, the trauma at the assassination of not only the seemingly ‘liberal’ President (he wasn’t), but true progressive leaders as Martin Luther King Jr and Malcom X, against a backdrop of an increasingly violent and high body-count conflict in Vietnam (at a time when the nation’s younger generations hadn’t been yet so fully propagandized into having their already naturally over-inflated and simplistic outrage sensibilities – something positive in a healthy culture — focused on self-serving, divisive identity politics issues, while being comforted with – equally divisive — narcissistic consumer pursuits, and actually would bond and fight on the streets in numbers that actually affected change), as a film reflecting that time from the bleakest of perspectives; as a long night of shambling monsters, society in chaos and under attack, with its worst violent fears represented in one could argue cinematically reactionary terms in this construct of that fixture of rural Americana, the farmhouse, under siege by mindless forces looking to destroy us, and society as we know it.

But that would far from tell the entire story… “Night” isn’t focused on presenting the idea that the ‘monster’ to fear is out there, ready to attack and destroy, with humanity’s only, and greatest, hope to fiercely fight, like good soldiers, for the return to dominance of the status quo patriarchal society (which is exactly what The Walking Dead is all about — no surprise, making it such a huge success, as people can never get enough of being gently patted on the shoulder and comforted with stories that tell them how good they are, and their way of life is, no matter what the world’s evidence reveals). No, Romero’s film is far more uncompromisingly bleak, telling us the reasons to not believe in a future isn’t because of monsters… it’s because of us.

Whether it’s the two fighting alpha dog males, the white Harry Cooper (Karl Hardman) and the black Ben (Duane Jones), too hard-headed and primally distrustful to work together, leading to further chaos, and eventual murder between them, or the young newlywed couple whose deep, childlike love for each other directly leads them to make fatal mistakes and shockingly burning to death (with their burnt flesh unceremoniously eaten and fought over by the zombies, the first truly deeply shocking moment of the film, that feels startingly transgressive even today, let alone how it must have been experienced in 1968 when things were truly a’changing in cinema and society), or Barbara (Judith O’Dea), with her deep traumatic sorrow over the death of her brother Johnny leading her to fall desperately into his zombie arms and be carried off to her certain doom, or the couple’s devoted concern for their sickened child (the only love the two feel in fact, as they despise each other), which, again, ends in their harrowingly brutal murders (they should have listened to Ben, who said right away they should get rid of the kid after they realized she was bitten… then again, Ben is the one who fights all along against Harry that they should stay out of the basement, only to end up surviving – the night, at least — by eventually locking himself in down there).

A family in dissolution

Romero is showing us, in the starkest black and white, in the most uncompromised of terms, that when the shit hits the fan, whether we try and find leadership, rely on love and concern, or try and find comfort by falling back into our societal roles (as does Barbara, immediately falling into the stereotypically hysterical female), it doesn’t matter. Identity politics be damned. We’re doomed. Humans are petty, limited, vessels of their own destruction (as I said, this ain’t the treacly comforting sentiment of the The Walking Dead). It’s a message more relevant than ever.

Even with its awkwardly presented acting moments, occasionally low budget crudeness and library music (or maybe as much because of it), Night of the Living Dead remains one of the most profoundly and startingly nihilistic experiences ever captured on celluloid. Romero’s signature rapid-fire editing and oft-eccentric camera angle choices – ones through which he manages to capture so many fascinating and resonant compositions – are magnificently born, completely realized, with this, his first feature film. Even though the filmmaker obviously continued to make plenty of good films (Creepshow, The Dark Half, for instance) and even a few important landmark ones (like “Night”’s sequel, Dawn of the Dead), hell, I’d argue his most accomplished and interesting, eccentrically composed and edited films were all in the can by 1973, with The Crazies, a dystopian film of a world going mad that riffs even further on the themes of “Night”, only in color this time, being the last (though Martin from 1977 could be a later throw in). 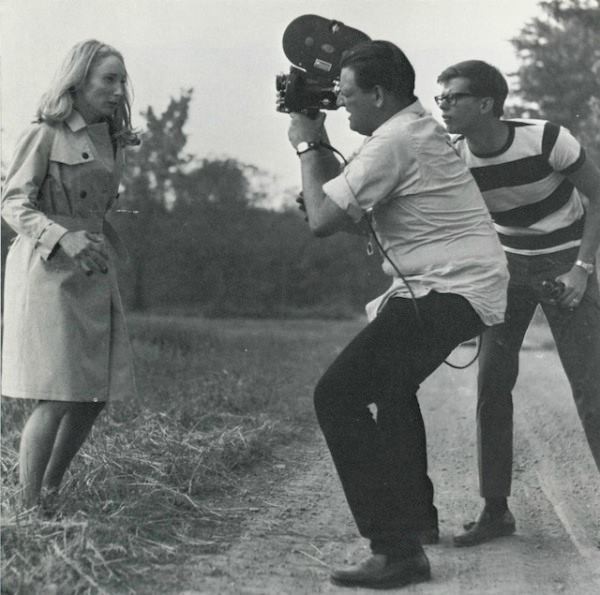 In fact, I would argue, after having so recently re-watched, and basked in the glory of three of these early, far too under-appreciated Romero gems (part of an Arrow boxset bluray release fittingly titled “Between Night and Dawn”, marking the two Romero zombie film milestones that forever staked his claim amongst the horror zealots) — namely the feminist domestic witchcraft tale Season of the Witch (1973), The Crazies and his swinging social drama There’s Always Vanilla (1971) – that if Romero had only made these films, without a zombie anywhere in sight, he would have likely been embraced and celebrated as a fascinating indie auteur with a unique, eccentric style, openly channelling acknowledged masters like Cassavetes, Bergman and – perhaps most of all – Welles. Certainly, The Crazies would be a much more deservedly appreciated film. Can’t wait to post my thoughts on these other Romero efforts.

Alas, it was the Moderne, and the smug, cackling hyena hipsters drawn to the place were out (not in force, as they were – unbelievably – with Candyman a month or so before, but still sprinkled about, enough to be an unmitigated distraction) and couldn’t be quieted even with the one of the two moderators asking them to be silent during the screening (unfortunately, the other then basically egged them on). I guess it was to be expected, as it was a Halloween screening before a Mile End crowd that’s already revealed itself countless times as cinematically mentally challenged. Yet, it makes it no less unpleasant.

The strains of the family in the opening cemetery scene

Even in the more deeply disturbing almost surreal moments of graphic violence, some were determined to cackle. Interestingly, I’ve found many of today’s hyenas to be female, as if the current #metoo movement has them feeling it’s important they show that they can be equally as mindless, as rudely distracting, as arrogantly self-centered, as any man… and they’re certainly proving it; I mean, my desire to pick them up and carry them from the theater for their complete lack of audience etiquette and clueless disrespect for the film they’re watching is as strong as if they were male! I guess that’s a victory. Congratulations, girls.

While I’m okay with every new digital way found to show “Night” to another generation (I only wish this new group was more tolerant and less unsophisticated), the 4k restoration does bring a few problems. While the restorers admirably worked to retain much of the grain, for instance, we can now clearly see that the corpse at the top of the stairs with the decomposed face isn’t particularly dead (or rotted) as they drag it away, something the murkiness of the original 16mm transfer never let us see (which was fine, with the less professional look adding to the sense of verisimilitude). But that’s small potatoes, a problem of a transfer that the film never asked for (or wants), not of the movie itself.

Long live Romero… and I mean that with or without the zombies.