Former Concordia graduate Lynne Stopkewich’s feature debut is commendable as a first-time effort, but all the critical hoopla its been receiving just makes me think that critics are starving for something apparently small and artsy they can “understand” and feel good about praising. I’ve spoken to people who are not going to see it because of its “disgusting” subject matter: necrophilia. Trust me, Nekromantik it ain’t. Actually, Stopkewich goes too far to present the subject in the most “tasteful” manner possible. Hence there are no graphic mortuary scenes or graphic necrophilic scenes, so stay home if that’s what you are looking for. All is tastefully withheld from the viewer’s curious eye by judicious camera positioning and smothering lighting. Which raises the questions, why do a “tasteful” film on necrophilia? If this is a film about necrophilia, as all the press is saying, then it’s Walt Disney Does Necrophilia. But the film isn’t about necrophilia at all, but just another new agey exploration of the age old spirit/body question. It fits in more snugly with “afterlife” or “out-of-body” experience films such as Ghost than Dellamorte Dellamore or the Nekromantik films. 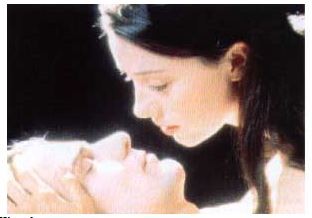 The first scene sees our freckle-faced heroine Sandra (Molly Parker) arriving at her apartment building and observing a dead body being taken away. Her voice-over brings us into a flashback where we learn about her childhood fascination with dead animals. She befriends a classmate and together, as the two teen friends in Heavenly Creatures , they perform bizarre, part-Christian, part-pagan burial rites. Her fascination with death, which is never developed (and given the film’s brevity, certainly could have been) is the only little bit of insight we have into her psyche. This fascination leads her to a job at a mortuary and daytime university medical training courses. She meets a young, handsome man, Matt, in a cafe. On only their second meeting, Sandra tells Matt about her preference for dead corpses. Now I don’t claim to be an expert on the psychological makeup of your average corpse-fucker, but I really doubt that a necrophile would tell his/her morbid bedroom preferences to a complete stranger…but anyway, the film makes no claims for such realism, and as I noted, is not about necrophilia. Sandra tries it with a warm blooded human, but the act merely arouses her for the dead thing and makes her run off to the mortuary. One could read the film metaphorically, with Sandra’s preference for immobile male bodies a sign of female empowerment and domination. However, she doesn’t get any pleasure from the control, but rather from the sense of emotion/life emanating from the corpse (each being different, and referred to as the “light”), making any such reading an act of interpretative magicry. Sandra isn’t into the necro-thing for the dominating/power control thing, or the sexual thrill but, as she expresses to Matt, for the wonderful “cross-over” feel she gets doing it with a recently deceased corpse. This is where Stopkewich’s cinematographer, Greg Middleton, gets to blast the set in glaring X-File-ish white light to make sure we realize that something spiritual is happening.

Perhaps the worst thing you could say about Kissed is that it becomes boring. Once Matt’s love goes unrequited and his desperate attempts at impersonating a corpse fail, we can see where the film is going. Borrowing a page from Romeo & Juliet , Matt commits suicide so he can gain Sandra’s eternal love (the suicide, which features full frontal male nudity, may be the film’s most daring moment). The film ends with Sandra lying down beside Matt’s glowingly white corpse.

As an odd coincidence, Kissed has a scene which takes place in a car wash, as does Cronenberg’s Crash . But whereas in Crash the scene sizzles with power and symbolic sexual energy (soap & water as semen), in Kissed Sandra merely opens the casket she is transporting and stares at the young corpse (with the familiar white light appearing). The scene does provide a step forward in Sandra’s cross-over into the realm of necrophilia, but makes no use whatsoever of the unique location. And another inconsequential point. Why is it that all the corpses that come into Sandra’s funeral home are young, handsome men! One possible reason, which would fit in with the subjective voice-over and other implausible plot elements, is that the film is in fact Sandra’s fantasy.

There are some nice touches in the film: a consistent visual look, good performances brought out through a liberal use of the close-up, and a good use of free-form circular camera movement to express Sandra’s ritualistic fervour as she dances, in underwear, around a corpse in the mortuary. In the end however, the film feels padded, even at its slim 80 or so minutes. It would have worked better as a short. To make it more effective as a feature, Stopkewich should have played up the fantasy angle, or explore in more psychological depth either the necrophilic or spiritual dimension. 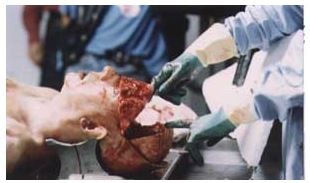 Aftermath begins by showing us nothing but a black screen, with the sound of a car accident on the soundtrack, then continues to show all, baring open the blackest, darkest part of the human soul. Aftermath is a fictional counterpart to the stunning The Road to Eden (Robert Adrian Pejo, 1995) and shares with it a poetic beauty for the ugly and the grotesque. Both films bring us into the spectral world of the mortician, but one uses real corpses, the other special effects. This difference effects how audiences react to the explicit viscerality of the autopsy footage. Knowing the corpses are real makes the experience strangely more engrossing, educational and voyeuristic. The fictional world, where Cerdà works, always creates a distanciating wall somewhere between the viewers brain and heart. But what Aftermath lacks in ontological veracity it makes up for with the tools of drama (irony and subtext, horror and shock) and cinematic form.

Aftermath begins with a car crash in black, followed by a snake-like camera movement slowly revealing the bloody remains of a roadkill dog. This pre-title sequence is accompanied by meditative classical choral music, instilling a thematic image/sound contrast that recalls the film of another great Spaniard, Luis Bunuel’s Las Hurdes (1932), where Brahms’ Fourth Symphony accompanies the pathetically squalid images of the Las Hurdes mountain villages. The film builds to a pivotal moment where shock (regular autopsy procedures) turns to horror (necrophilia). The soundtrack foreshadows the horror with its mix of eerie ambient music/sound and natural sounds of footsteps, saws, squishing blood and body parts. In the first half two morticians prepare the corpses of two men (victims of the car crash we presume), removing the brain, eviscerating the body, etc. Subtle touches again foreshadow the soon-to-come horror. There is a stunning cut during an autopsy to a close-up of the mustachioed corpse, eyes wide staring up at the mortician. I wouldn’t think eyes are ever left open during an autopsy, but it makes for an extremely dramatic moment. It also sets in mind the notion that the corpses somehow have a spiritual or emotional understanding of what is going on around them…and this suggestion is used to powerful effect in the film’s second half.

One of the morticians leaves. The hint of necrophilia begins with the simple name tag of the third corpse: Marta Arnau. Only the mortician’s eyes are visible in a close shot, suggesting a heightening state of arousal. The defining moment for the shift from shock to horror is when the mortician, after preparing the female corpse, takes out a regular kitchen knife instead of his usual clinical, sterile mortician’s tool. The shift from the cold, gleaming steel of his regular ware to an everyday kitchen knife immediately lends the proceedings a more graphic, violent nature. Cerdà periodically fades to black, extending the events leading to the necrophilic act –the “foreplay”– and again reminding us of the black fathoms of moral evil. The camera pans down and zoom’s-in to a drain pipe, pulling us further into the depths of depravity.

Cerdà shatters any fantasy notions one may have of necrophilia. This is not love with a pristine recently dead corpse (as necrophilia is represented in Kissed ). The necrophilic scene is equal measure sex and horror. He caresses the body with the knife, cuts into her skin, then –in the film’s vilest moment – fucks her with it. He cuts open her chest and masturbates while fondling her breasts. He mounts hers. The helpless, now bloodied body gives itself up to the mortician’s violent thrusts (recalling Udo Kier’s rant in Flesh for Frankenstein , “To know life you must fuck the gall bladder.”). The necro-act is made more disturbing by well-placed cuts to the victim’s face that give the impression she is feeling the pain and humiliation. Haunting choral music underscores the religious subtext. The mortician becomes the ultimate desecrator of both body and spirit; within Spain’s Catholic tradition, which the film openly manifests, he is the unredeemable villain. It’s as if Cerdà is asking, what is more horrible, having your body raped while you are alive or having your soul raped when you are dead? During the intense necro-rape feelings of anger, rage, passion, emotional evisceration and piety spear into each other. As if a visual metaphor for this “emotional drain,” the scene concludes with a slow zoom-in to a faucet: a return back to the everyday, the mundane.

In the final scene the mortician arrives home, and proceeds to feed his dog a blended puree of the woman’s heart. The act becomes the final insult to the sanctity of death and the body. The dog brings the film to a full circle, echoing the slaughtered dog of the pre-credit sequence. If indeed the heart belongs to the woman who died in the pre-credit sequence car crash, Cerdà is concluding with a coy poetic justice: the person in the car that killed the dog gets her heart eaten by another dog (when asked about this interpretation Cerdà smiled and exclaimed, “now that’s a stretch.”). The respite from the mortician’s disturbed psyche is short-lived. Cerdà deceptively brings us back into the familiar space of the home, only to conclude with the zoom-in to an obituary notice in the newspaper, the name “Marta Arnau Marti” swathed in religious crosses. No punishment, no retribution, no redemption, only lingering depravity.