The Love God is easily one of the most wildly inventive, original American genre films of recent years. It seems to re-invent itself as it goes along, spewing forth a barrage of sound and image that defies easy genre categorisation or simple plot synopsis. Stylistically, it is a frenetically edited pot-pourri of live action and animation, science-fiction and horror, scatological humor and gore-gag comedy, wrapped up in a juvenile narrative that houses an implicit awareness of its underlying social issues (mental illness and the health system, co-dependency, obsessive behavior). The film is set in a New York city queasily perched between grindhouse street-realism (a la Basket Case and Taxi Driver ) and cartoon-like expressionism. Rapid-fire voice-over blasts forth the narrative exposition: recent medical cutbacks have led to an increase in patient discharges from the local state mental hospital. 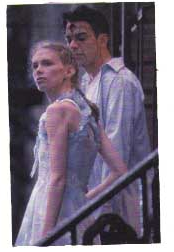 The central protagonist is LaRue, a schizophrenic with compulsive reading disorder (the urge to read and destroy the written word). LaRue’s goal is to re-integrate into “normal” society without the dependency of medication, but the film is populated with people fighting their own mental obsessions. LaRue’s psychiatrist, eager to discharge LaRue, sees his patients as annoying obstacles to his wacky research on his theory of “Religious Parasitic Co-Evolution” (James Schamus, one of the founding partners of the film’s production company, Good Machine, teaches at Columbia University. Could the psychiatrist and his research be a veiled reference to academia?). The doctor’s innocent looking female assistant is actually a sexually repressed dynamo working as “a sexual surrogate therapist in training.” LaRue is neighbor to Connie, a woman suffering from compulsive cleaning disorder, and her emotionally confused mute daughter Helen (played wonderfully by Shannon Burkett, whose physical appearance recalls a young Sissy Spacek). The co-dependent couple support themselves with a crime-scene cleaning business. LaRue briefly rooms with a Tourette-Syndrome suffering Victor. The seventh character is a self-mutilating schizophrenic who thinks she is Kali, the Hindu Goddess of love, destruction and death, who sacrifices men to her beloved God Shiva. Not to be left out are the self-consciously low-tech looking parasite monsters, Trematodes, who slither about the sewer system, devour and spit out human’s (through their anus), multiply, and have a fondness for shiny metal objects (it seems even the monsters have to have an obsession to fit into Grow’s demented universe!).

This may seem overwhelmingly confusing, but things hold together in a kaleidoscopic way, with the parasites narratively and thematically linked to the central characters. Each character interprets the Trematodes relative to their own obsessive mania. The psychiatrist sees them as the crucial missing link in his madcap theory; Kali thinks the monster is her beloved God Shiva; LaRue builds a bubble-gum replica of the monster parasite (shades of Richard Dreyfus and his mashed potato mountain in Close Encounters of the Third Kind ?); even Connie, one can say, thinks of the monster as a metaphor for the dirt and grime associated with New York city. 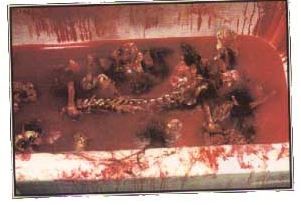 It all makes sense right? The convoluted narrative is matched (if not surpassed) by the film’s manic style: garish, saturated colors; frenetic hand-held camera; rapid-fire cutting and voice-over narration; comic-book angles; animation interludes (why did I feel like writing Quaaludes?); and abrupt changes in the wall-to-wall music. It could be argued, given the dementia of the characters, that this style-overload is thematically and narratively motivated, and not excessive; in the same way that The Cabinet of Dr.Caligari ’s physical space is expressionistically distorted to reflect the central character’s madness. The physical space-as-mental-space can be extended to include the reality of living in New York city. The film probably strikes a special chord for New Yorker’s accustomed to their cities own “dementia.” Shots of LaRue walking along city streets, wearing glasses that blur his vision (negating his reading disorder) and saying that he is now “normal like everyone else,” has an irony only New Yorker’s can fully appreciate!

A further link to New York culture was made to me by friend and former New York resident, Peter Rist, who compared the film’s sensibility to that of the New York beat underground film scene of the 1950’s, early 1960’s (Ken Jacobs, Jack Smith, Robert Frank, Jonas Mekas). Perhaps a lofty association, but consciously or not, there is a striking affinity between Grow’s energetic style and the sexually liberating, free-form beatnik style (Can’t “love, destruction and death,” which in the film describes the love Goddess Kali, apply equally well to the concern’s of many New York underground films?). Generically closer to home, The Love God , while original, shares bits and pieces of elements from such films as Brain Damage (urban-ness, theme of dependency, colorful parasite), Natural Born Killers (quick cutting, schizophrenic use of style and formats) and the films of Peter Jackson (gore-gag comedy, cheesy monster make-up).

Though The Love God does not hide the fact that it is a video-to-film transfer, it certainly could have given how impressive it looks visually. Anyone who has in mind the average shot-on-video production will be stunned by the film’s texture and definition. Grow used two formats for stylistic variance, a digital betacam for a film look and Hi-8mm for more of a video-pixel look. Cutting between the two formats, which no doubt underscores the thematic of schizophrenia, conditions the viewer’s sensory system to relatively perceive the digital footage as being “cinematic.” The Love God demonstrates that with proper attention to lighting and style, the video-to-film format has a future alongside celluloid, and should provide inspiration to low-budget filmmakers. Given how impressive style fits format in The Love God , I was surprised by the offhand comment made by Gavin Smith in his essay on tape-to-film transfers “Straight to Film” in the recent Film Comment (July-August 1997). He refers to The Love God as “the inept, self-satisfied would-be cult digital video film”! Everyone’s entitled to their opinion, but how can such an evaluative lambasting be made without any critical support!