Donato: How did Aftermath begin as a project?

Nacho: I thought about the movie when I was in Los Angeles, about 2 months before I started writing the script. Since I had never seen a movie that was completely focused on that subject, I wanted to make a movie about autopsies and about death. I wanted to go ahead and do this, and I also wanted to do some sort of director’s reel for me, to help me get financing for other projects. However, it turned out to be very difficult because it’s such a controversial subject. So that’s the genesis of the project. I’m very fascinated with the medium of medicine, and doctors; this, plus Catholic or religious iconography I find very interesting and very cinematic and horrific as well.

Donato: Did you do actual research in terms of autopsies and medicine? 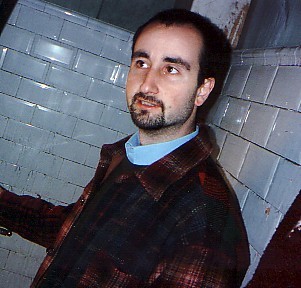 Nacho: Yes there was a doctor who worked on research. I did an interview with a doctor, a forensic surgeon, who was a woman, who really cleared up many questions I had in terms of the process of doing an autopsy. She invited me to see an actual autopsy, so I saw three autopsies in one morning. That was a tough two hours!

Donato: Were you in the actual room or behind a glass?

Nacho: No, no I had the corpse about one metre away from me, sometimes even closer.

Donato: Did you faint or feel light-headed?

Nacho: You know I had to stop and sit down for a while because originally I was walking around but then after a while I starting getting dizzy and had to sit down. I remember I still had the notebook where I took my notes and on that particular day I can remember my hands shaking.

Donato: Where was the film shot, in an actual mortuary or a set?

Nacho: It was shot in a mortuary, a mortuary in Barcelona which receives about six or seven cadavers a day. I didn’t have any money to build sets because that was quite complex, and also I wanted to shoot in a real location because you get the feeling more that way and that energy ends up on the screen. On the other hand, I did all my storyboards based on that location so I was really risking a lot if I ended up not getting it, because I had everything planned out according to this place. Even the script I wrote was based on that location.

Donato: Were any of the corpses actors, because one of them, the man with the moustache, looked so real, so human?

Nacho: We had two fake corpses, a male and a female, and we had this actor that came in for two days, about twelve hours, who was supposed to be a HIV infected cadaver. He was alive of course. I wanted someone who could hold still, and also be very skinny and zombie-like. He was very, very good in miming. You should get the idea that he’s been dead due to an overdose or something. He had a hard time because he was completely naked, lying on a very cold stretcher, and he was not comfortable. But he did a really good job and he was very pleased. I payed him about one hundred dollars.

Donato: How do you deal with the criticism that your film is pornographic, which is what Chas. Balun said about your film after the press screening, or that it goes further than is narratively or thematically necessary?

Nacho: The film is of course quite graphic, but that was the only way to really show what was going on in the autopsy room. I think that for some people that might get in the way of what the film is really about, because it’s so graphic that people will turn their head away and not want to see anything else, but there’s something there that I’m trying to say. The movie is not as explicit as it could be, really, because there’s a lot of sound that fills things in. If you take a close look at it, there’s not a lot of gore, not that much anyway. It’s probably more the way I shot the sequences, so distanced, so clinical, and maybe so cold, that people get the concept and maybe the feeling that appeals to their souls and goes straight to their hearts. Maybe that is the reason why some people reject the movie, but yes I wanted to do a movie that was hard. I wanted it to be one of those films that you still think about once it’s over. That’s what I wanted to get across because it’s a subject matter that is really, really, important to me, and it’s nothing to joke about or take lightly.

Donato: Would you say then that the film is about questions of our mortality, the body and the soul?

Nacho: Yes, the theme is about death, and I think people one way or another at one point in their lives, worry about death. They realize they are going to die, they are conscious of it, and some people may accept it, some people may not accept it and go into a nervous breakdown. I had several breakdowns because of this situation, and I wanted to make a film about this, to try and communicate this. This is not a film that condones violence, and is not a bloodfeast movie. I want people to really think about it. It’s not misogynist either, even though there’s a rape sequence. I think it’s a film against violence. It’s a film against the manipulation of the human body, that’s it. But in order to get that point across I had to show the true violence that is going on.

Donato: I think you do that by the cutting in the film, which really makes it hard to watch, such as the cuts to the profile shots of the female corpse as she’s being violated, and you see her moving to his thrusts. You forget that she’s dead. You feel her emotions, the way she is being violated at that moment. And you give a sense of personality to the corpses, while you take away personality from the mortician-rapist. How did you direct the actor because he begins as a mortician but then becomes something else half-way through the film. It changes from a film about autopsy to a film about necrophilia, and the character has to make this change?

Nacho: In a way the character really hasn’t changed because from the very first moment we see that there is something twisted in this guy, because he’s watching what’s going on and he seems to be enjoying it. After the other guy leaves he is alone with the female body and the erotic second-half begins. The actor had the point down just from reading the script. He knew what the film was about, so what I wanted from him was a mechanical interpretation of the role. As you say, I wanted the dead to look alive and the alive to look dead, that’s what I wanted to get across in the film. And I had to frame all the shots so the leading doctor would be fragmented, he wouldn’t be in whole, but in his body parts, and then I would go for the close-up’s of the faces of the dead cadavers, to give the feeling that they are alive or that there is something still living inside there. The actor, Pep Tosar, really understood that situation [ed. Pep Tosar is pretty much unrecognizable in Aftermath , but he also starred as the titular Dr. Curry , the short produced by Cerdà.] I was afraid that he was going to get mad because I wasn’t getting close-up’s of him and because he was always wearing the mask, which for an actor is a real challenge, but he understood perfectly. I worked with him several other times and he’s just a great guy. He had a hard time shooting the movie because it was getting into his mind, since he’s a method actor.

Donato: Could you talk about the film’s religious subtext? I’m wondering whether a Spanish audience, which is predominantly Roman Catholic, would be in more in tune with the film than a much more secular North American audience?

Nacho: Well, once you’re talking about death the religious subject comes across, in way or another. It’s pretty clear in the film that there’s something religious going on because of the cross, the crucifix, there’s some mystical side…

Donato: And there’s the strong ritualistic aspect as well…

Nacho: Exactly, exactly, it’s like a big mass, the whole movie. Spanish audiences really take it the way it’s been taken here. Once we get rid of the crucifix and everything else we just stick with the body, and what happens to the body, the decay of the human flesh, and that’s something universal, an international subject. It’s something that people can relate to everywhere in the world. It doesn’t have to do with religion, that part, it deals with human consciousness, or let’s call it human soul. It’s more like a respect for the dead, and everyone has that. Maybe people here will be more critical because there has always been censorship and double standards and people aren’t used to seeing such graphic violence on screen.