Mekko: A Drifter’s Tale of Longing For Home

Director Sterlin Harjo’s (Seminole Creek) third feature film Mekko (Four Sheets to the Wind, 2007, Barking Water, 2009) has been making a successful film festival circuit run, having played at TIFF 2016 and most recently at Montreal First Peoples Festival (August 3-10, 2016). Harjo’s third feature film is a testament to the power of simplicity, or apparent simplicity, to provoke powerful emotions and carry intellectual weight in film. The story of Mekko is slight but Harjo embellishes the slightness with nuance at every level, narrative structure (subtle non-linear interjections, flashbacks, memory images) performance (especially the titular lead role by former stunt man Rod Rondeaux), script, use of language, music, sound and color. To the point where when the film ended I felt the need to immediately watch it again (I resisted and waited a few more days). The film opens with arid black and white images of a ghost town, with a young man’s voice, who we soon learn is Mekko, speaking in voice-over in his native language of Muscogee about his ancestral home town. Mekko explains how his grandmother, who raised him and his cousin John, believed an evil witch brought sickness to their town as a form of punishment for the Natives renouncing their ceremonies. Mekko predicted the sickness because of the town’s polluted water, which the grandmother sees as a sign of Mekko’s ability to see into the future, to see death. The story, whether true or not, becomes apocryphal, a mantra for the older Mekko, who is renounced by his remaining family when released from prison and drifts into the city of Tulsa, Oklahoma in search of “an old friend.” 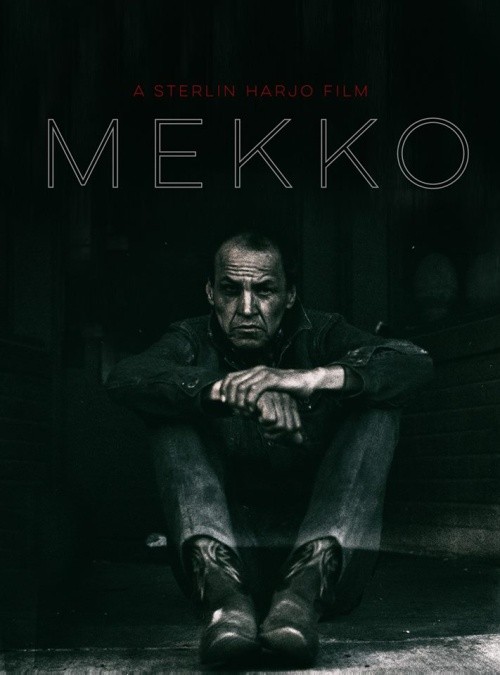 He settles in with the city’s disenfranchised (mainly) Native homeless, who seem to look after and care for each other. Mekko finds his ‘friend’, a portly, good natured Bunnie (Wotko Long), and befriends a younger waitress, Tafv (Sarah Podemski) who offers kindness and free perks at the diner she works at. But standing in Mekko’s path to redemption –for the drunken accidental killing of his cousin 19 years ago– is the sinister self-imposed ruler of the homeless Native community, Bill (Zahn McClarnon), a short, intense man with penetrating dark eyes and a perennial scowl. Bill tells Mekko that he is the community’s ‘protector’, but the truth is that he is a drug dealing bully who takes advantage of the sick, weak and addicted. While Bunnie is Mekko’s like-minded spirit friend, Bill represents his antithetical spirit, the evil spirit, estekini, that his grandmother warned him about. In many respects, suggested through several synchronous events and details (Mekko’s ‘Indian’ hat, also worn by Bill; the way Bill retrieves the weapon he uses to attack Mekko and kill Bunnie mirrors Mekko’s lethal attack on his cousin, mirroring shots, dialogue statements, etc.), Bill is a phantom character who functions as Mekko’s doppelganger. In the most engaged dialogue between them Bill eerily informs Mekko “You’re a warrior. I know you,” which ends up, like much of Bill’s dialogue, foreshadowing Mekko’s eventual murder of Bill. 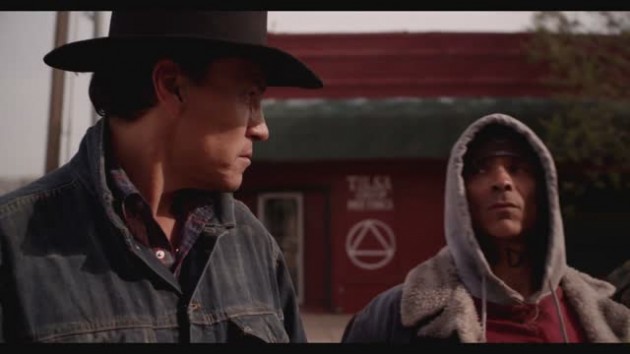 Mekko and his nemesis Bill

Although the film is couched in realism, aided by Harjo’s use of Tulsa street denizens essentially playing themselves, and has a strong social consciousness, Harjo flirts with popular genre, touching on the horror genre, with its moments of intense violence, supernatural overtones and one startle edit effect as scary as anything from a James Wan film (a snarling Bill jumping out from a dark alleyway to awaken Mekko from his waking nightmare). But the genre that Harjo draws from the most, appropriately enough given its place in First Nations and North American history, is the American genre par excellence, the western. The main thrust of the film is the stuff of classic western, think Shane or High Noon: Mekko as a tall, laconic stranger, wearing jean jacket and feathered hat, strides into town and ends up killing the bad gunslinger, Bill, who threatens and intimidates the community. Bunnie is the ill-fated side-kick, Tafv (Sarah Podemski) the friendly bar maid, her diner the saloon, and the final confrontation between Bill and Mekko plays out in the town’s center by day in a methodical cross cut as they search each other out. Given the role of the western in the shaping of popular cultural consciousness and the myth of Manifest Destiny and the Frontier ‘Wildnerness vs. Civilization’ mythos, what Harjo does to ‘Nativize’ the western is nothing short of brilliant. Mekko not only kills Bill but he rips out his heart and sends its evil spirit free by setting the heart adrift along a local river (probably the Sands Spring).

As a twist on the classic western trope of the good gunslinger leaving the town and community to wander back into the wilderness, Mekko rescues a younger Creed man, Allan (Tre Harjo), and is driven out of Tulsa by Tafv back to his ancestral home, which we’ve seen several times in black and white flashbacks. Even if the town is now a desolate ghost town, with an old somewhat ‘Christianized’ Native man living on his grandmother’s old church home grounds, it represents hope. When Mekko steps into his grandmother’s kitchen he ‘sees’ her as she was, standing at the stove stirring a pot of soup, his younger self and cousin John seated at the table waiting to be served (a ‘memory’ image which references both Wild Strawberries and Annie Hall). His voice-over, speaking in a younger voice and in his Native Muscogee language, bears the signs of hope: “Back to the hills, back to our medicines. They will be back. I have faith. They just need time. And I’ll be there cousin.” The film ends on a majestic landscape shot, pixilated to capture nature in its splendorous sublimity, clouds and low lying fog floating supernaturally between river and hills. The image stands in stark contrast to an earlier pixilated city shot of highway traffic streaking at night, a perfect encapsulation of the classic western Wilderness-Garden duality.

All three of Harjo’s feature films have been set in Oklahoma, which happens to be his home State, born in Holdenville, Oklahoma. The decision to set the film in Oklahoma also resonates with Native American history, as Oklahoma played an important and complex role geo-politically in the history of First Nations and United States relations. The formation of the Indian Removal Act in 1830 relocated Indian tribes east of Mississippi into lands in the West. What would become Oklahoma was a key relocation area, providing safer lands for “The Five Civilized Tribes” (Cherokee, Chickasaw, Choctaw, Creek (Muscogee), and Seminole), while accommodating the continuing settlement of lands east. This land would later be called Indian Country or Indian Territory (see wikepidia entry on the History of Oklahoma). Hence by having Bunnie, who dreams to Mekko about returning to his ancestral home, and waxes poetically on how much better it would be than where they are, and then ending with Mekko returning to it, sends out a scathing message about Indian Relocation and the ‘preferential’ treatment given to the Native tribes that were least resistant to the aims of colonization (the so called “Five Civilized Tribes”).

Harjo uses language in a cleverly symbolic manner. When in the present, which is from the moment Mekko leaves prison and then stays several days in Tulsa, he speaks only in English, although he is often silent. Contrarily, when we hear his voice-over about the past, his cousin John, his grandmother, the Creed rituals he lived as a boy, and his ancestral home, he speaks in Muscogee and with a slightly younger sounding voice. By setting his Native language in the past it signals how the Indigenous culture can only be reclaimed by venturing back into the past, through ritual, language, dress, song, food, etc.

As serious and dramatic as the film is, Harjo lets slip in some cinephilic moments, with some personal homages to a variety of films, such as the earlier noted reference to Wild Strawberries and perhaps indirectly, Annie Hall. In a light scene where Bunnie persuades a theatre employee to give him some free popcorn, a poster for his second feature Barking Waters is visible on a wall behind the concession counter. And in another scene where Mekko stands under a concrete underpass, we see the words “The Motorcycle Boy Reigns” scrawled on a pillar, written in the same font as it appears in Francis Ford Coppola’s Rumblefish. And by far the most comic scene in the film is the one where Mekko goes to a gun store to buy a weapon he plans to use to kill Bill (Tarantino pun not intended). The scene is pure satire, setting the cool Mekko on one side of the counter against the “awshucks” gun store clerk, or owner, on the other side of the counter. Mekko blurts out, “need a knife.” The man also happens to be the town’s sheriff, a fact that throws back the Tulsa’s justice to the days of the old Wild Wild West, when the sheriff often assumed multiple roles in the community. The clerk gleefully shows him a fancy retractable knife. As he hands it to Mekko he chimes, “rock and roll.” The knife is beyond Mekko’s budget. “What do you got for 10 bucks?” The clerk gets him a more savage looking knife and chimes, “How about this guy right here. You can rock and roll on the streets of Tulsa with that.” After feeling it over in his hand Mekko responds, “It’ll work,” to which the clerk replies, “outstanding.” Through the store clerk’s disarmingly nonchalant attitude, Harjo satirizes the NRA and the Second Amendment’s “right to keep and bear arms”.

Employing a blend of social realism and revisionist Western genre tropes with an atmosphere of art house minimalism, writer-director Harjo has created with minimal resources and shooting time, an impressive feature film which manages to speak to the core of his Native roots while opening up to more universal themes such as homelessness, disenfranchisement, poverty, social crime and cultural alienation. 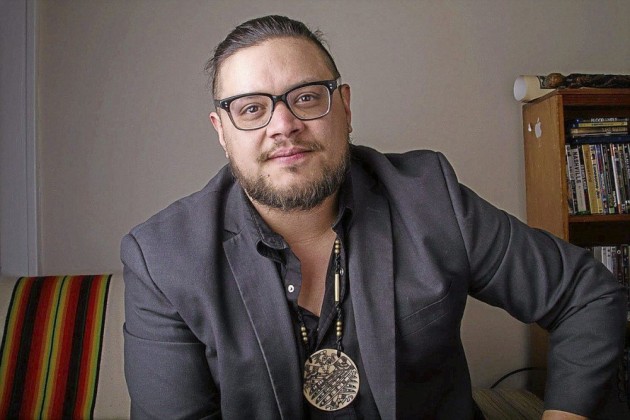