A short trip to New York afforded the lucky opportunity to catch a few harder to find and/or less celebrated films of the late great maestro of the hallucinatory gore film (amongst other wonderfully crazed delights) Lucio Fulci, made before hitting his later salaciously indulgent string of masterworks (nothing like a defiantly lapsed Catholic to get really down and dirty), including this, Massacre Time, his first go at directing a Western.

It certainly has the requisite sense of sweaty grit (though even the worst of these spaghetti westerns seem capable of evoking that experience) and it’s interesting to see not only Fulci’s already obvious penchant for morbidly lingering on the effects of violence to the flesh (though nowhere near as obsessively pronounced as sites of pure abjection as they would become in his later films), but also in the telling of another tale revolving around a family’s perverse descent into destruction, with children often suffering the worst traumas (you never get the sense Fulci had the most comforting home environment growing up, to say the least). 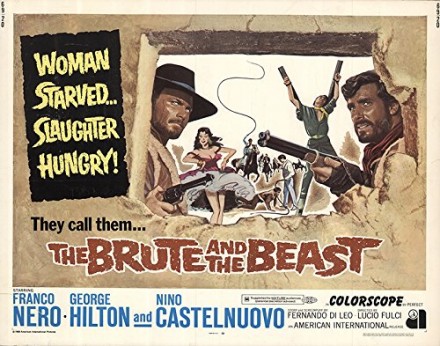 I have no idea how the film did upon it’s release, but it must have been a coup for Fulci to have Franco Nero starring for him after the huge success of Django that same year, with Nero displaying his appealingly down to earth (for such a strikingly handsome figure) demeanor (while also again showing himself to be the international Mel Gibson of the day, determined to be tortured and beaten to a pulp in as many movies as possible). Overall, though, as engaging as the two male leads, Nero and George Hilton, are (there is barely a female of any importance around, other than the Mexican maid who gets quickly shot and killed) and as interesting as it is seeing some of the early signs of Fulci the auteur at play, the imagery and set pieces aren’t striking enough for the film to stand out as even a particularly gripping example of the genre, let alone a classic. Unfortunately, as is the case with a lot of the worst of the genre, in a forced attempt to outdo the other current Spaghetti Westerns that were flooding the market, some of the gun-playing theatrics end up playing out a bit silly and far-fetched.

Thanks to the Malastrana Film Series/Yunsun Chae for continuing this annual series of Italian genre treats! My only regret is I couldn’t have caught all fifteen 35mm Fulci films that played!