The Man Who Laughs

For its annual benefit screening, the Cinémathèque québécoise offered a restored 35-mm print of Paul Leni’s searing expressionistic historical drama, The Man Who Laughs. A major attraction as always for these screenings, is the chance to drift back to the golden era of silent cinema when glamorous A-pictures were accompanied by original orchestral musical scores. In this case Quebec’s own Gabriel Thibaudeau, back from a long, successful tour of the film, presents and conducts his score, performed by L’Octuor de France. Thibaudeau, who scored other recent successes with The Phantom of the Opera (1925) in 1990 and The Fall of the House of Usher in 1993, outdoes himself with his finest work to date. With this superb score Gabriel Thibaudeau now must surely rank as one of the finest contemporary composers for silent cinema (move over Carl Davis). His score comprises searing romantic-lyrical passages for the warm, sentimental scenes, upbeat gypsyesque music for the crowd/circus scenes, and modern passages of classical music mixed with quasi-experimental hues. (The soundtrack CD is available in most local music stores, and I recommend it highly.) The film print, restored by the Cineteca Bologna, was first rate, with very few scratches and only the odd shot obviously taken from bad source (one of the final close-up two shots of Philbin and Veidt on the boat most glaringly). 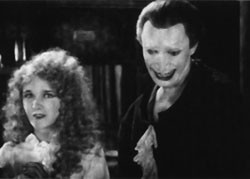 The film, though sometimes mentioned as a horror film, is actually an historical-romance costume drama. It’s closest ally in this sense is The Hunchback of Notre Dame, also from a novel by Victor Hugo, and a film that it borrows from quite liberally in its use of sets, crowd scenes, and theme of “beauty” (Philbin/Baclanova) and the “beast” (Veidt). The main difference between the two, and where this one has more claim to being a horror film, is that The Hunchback of Notre Dame sticks closer to historical-realist authenticity, while this one, though a period piece, plays the baroque-gothic note more prominently. This is no where stronger than in the opening prologue where an evil King Jacques the 2nd (Sam de Grasse) and his henchmen/jester Barkilphedro (played by Brandon Hurst) execute a nobleman (Conrad Veidt) in an iron lady, and then have his young son scarred for life by sending him to the gypsy’s to have his face surgically deformed into a permanent smile (“so he can always remember what a fool his father was”). The prologue contains a series of strikingly expressionistic scenes: An eerie right to left, low angle tracking shot (about 15 seconds) follows the king and jester as they gleefully march toward the torture room. The execution is staged against a stark black background. The human refuge of these and other tortures are seen in the following scene where bodies looking like cardboard cutouts lifelessly swing from gallows; this is followed by a stark winter scene of the scarred boy being left behind on the dock while a ship leaves the port; the boy then rescues a baby girl left behind to die and, as Everson noted in Classics of the Horror Film, a scene of a tomb-like shadow emerging from a prison that recalls the introduction of the vampire up from the hull of the ship in Nosferatu (1922). The film returns to such stark expressionism only near the end, and suffers from a lull in the pacing in its middle, but always remains vivid and exciting in the circus scenes.

It is fascinating to see just how much more sympathy director Paul Leni holds for the circus world/characters than the world of the royal court, whose members are made up and costumed to look either utterly ludicrous or insane. This theme of insanity within royal blood (incest, in breeding, rape) is quite common in the historical genre. As examples, look no further than Sam Jaffe’s dumbfounded expressions in The Scarlet Empress, the duchess’ son Vladimir in Eisenstein’s Ivan the Terrible Pt. 1 and, most recently, The Madness of King George. With such a sympathetic depiction of the underclass circus world, I would hazard a guess that Tod Browning was influenced by The Man Who Laughs for Freaks, which he made four years later and which stars Olga Baclanova as the female lead.

The baby girl grows up to be the beautiful Mary Philbin, the object of Lon Chaney’s desire in another French-novel based, early melodrama-come horror film, The Phantom of the Opera. I mention this because of an interesting, intertextual moment during the scene of Duchess Josianna’s (played by Olga Baclanova) seduction of Gwyneplaine. Gwyneplaine, who stands as a possible heir because of his nobleman father, is invited to meet with the duchess at the royal court. The lowly circus freak/clown Gwyneplaine, self-conscious of his deformed mouth, enters her company wearing a black scarf draped across the bottom of his face. As Josianna is about to pull away the scarf, Leni crosscuts to a lonely Dea (Philbin) praying and thinking about Gwyneplaine. Philbin of course was the actress who did the same to Lon Chaney’s mask in The Phantom of the Opera, slowly unmasking and revealing a similar exaggerated grin. Only here the woman reacts with sexual passion rather than disgust and fear, and kisses him on the mouth -something Gwyneplaine has not allowed any woman to do, including his true love Dea. (As a strange coincidence, Baclanova, with her curly blonde locks and searing light eyes, looks strikingly like Madonna. Other people who were with me at the screening felt the same thing.) Leni also borrows from the ending of The Hunchback of Notre Dame with Gwyneplaine escaping the staged royal marriage by rooftop, where he peers down at the enlarging group of curious townsfolk, jumps from one building to another to avoid the court guards, and hangs menacingly from the roof before pulling himself to safety. Unlike the original downbeat novel, the film ends happily, with “homo” the German Shepherd wonder dog warding off a guard by attacking his throat (the only scene to elicit laughter), and allowing Gwyneplaine to join Dea and his mentor, philosopher/barker Ursus (the dog also swims to join them). [Though, according to historian Everson, there was a more downbeat ending filmed where Gwyneplaine walks the snowy countryside and finds refuge with a family of like-deformed children. A production still from this scene appears in page 26 of Everson’s book Classics of the Horror Film.] The film is a testament to that wonderful yet brief period between 1926 and 1929 when the American film industry was smitten by all things German, and lured many of its greatest talents across the Atlantic to make remarkable films that blended American technology and resources with Teutonic/expressionist sensibility (The Magician by Rex Ingram, Sunrise and Four Devils by F.W. Murnau, Four Sons and The Hangman’s House by John Ford, The Last Warning and The Cat and the Canary by Paul Leni, Seventh Heaven, Street Angel and The River by Frank Borzage, The Docks of New York by Joseph Von Sternberg, The Third Degree by Michael Curtiz, and The Crowd by King Vidor).