AmérAsia: Korean New Wave and Beyond 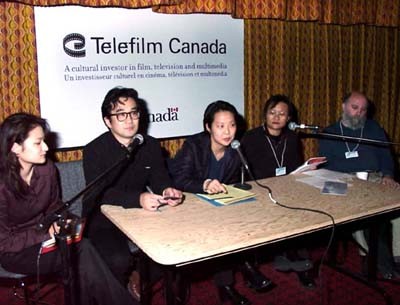 The 1st AmérAsia International Film & Video Festival (Dec. 3-Dec.12, 1999) is following a fairly recent Montreal trend in Asian themed film events, but differs in its slant. By including both indigenous Asian cinema (with an emphasis on Korean cinema this year and Japanese slated for next year) and Asian-North American filmmaking, AmérAsia deals openly with issues such as multiculturalism, ethnicity, identity, and the broader Asian Diaspora. Simply put, it is attempting to represent filmmakers of Asian descent. It is a very welcome festival addition to a city that prides itself for its cultural openness and cosmopolitanism.

After So-Young Kim’s excellent overview of the changing landscape in recent Korean cinema, much of the discussion centered on what Peter Rist noted as the difference between the “old” and the “new” Korean New Wave cinema. Namely, the flourishing independent (indie) film and video scene that has sprung out alongside the “blockbuster Korean mode” since the change from military to civilian government in 1993/1994. While there are still certain problem areas (explicit sexuality, gay themes, and Japanese cinema), things have loosened up considerably and a liberalizing movement in Korean society at large was noted by both Korean participants. Something which Yun-Tae Kim expressed as being especially important for the acceptance of non-mainstream cinema in general.

Still, the Korean indie scene is plagued by similar problems faced by indie filmmakers everywhere: funding, distribution, and exhibition. Yet, from what I have gathered from the two Korean speakers, the Korean indie scene, which includes short films, video, experimental and documentary, is in far better shape than the cinema of most market economy-driven nations. As Yun-Tae Kim said, the Korean Film Commission is slowly realizing the importance of cultivating a strong indie film culture and starting to fund such projects (though he noted a problem in the selection process). By his count, there are about 300 such films (shorts and videos included) made annually. And there are increasing exhibition venues for these films, including an average of one film festival per month as a potential showcase platform. Two such nationally recognized festivals are the Puchon Fantastic Film Festival and the Pusan International Film Festival. So-Young Kim, who has served as Program Director for the Seoul International Women’s Film Festival, is about to inaugurate a third major film festival as its co-programmer, the Chonju International Film Festival: @lt. from April 28 – May 4, 2000. Even more so than the two existing festivals, the Chonju Festival has a mandate to promote new and exciting alternative film, with a special emphasis on digital film. In this latter respect the Chonju Festival has commissioned three digital short films to be made by three filmmakers, one being Yun-Tae Kim. And based on two of his shorts that I have seen at this festival, Dowsing and Video Ritual, this will be something to look forward to with anticipation.

As So-Young Kim noted, this burgeoning indie scene is part of an outburst of intense cinephilia amongst the young in Korea. So-Young Kim actually prefers the term cinemania because it captures the euphoria that is a carry-over of Korean street politics (student protests, labor demonstrations). So-Young Kim explains that during the military government rule people had to attain a permit to go abroad, leaving cinema the eye onto the world scene for many Koreans. Because of this, for this cinephile movement cinema has retained its powerful political and cultural value. 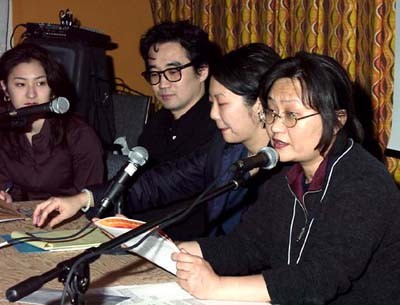 What the panel title doesn’t reveal is the distinction between the late 1970’s, early 1980’s New Wave (or New Cinema) and the more recent indie scene and cinephilia. As Peter Rist lamented, viewers in Montreal know very little about this more recent New Wave simply because the films have not screened here (a gap that AmérAsia is in the process of helping to fill). Partly generational, another dividing line between the two New Waves is, as noted by both Korean speakers, the shift to a civilian government. The political gyrations filmmakers had to negotiate during the post-World War 2/Korean War military rule in Korea is related by the filmmakers themselves in the excellent documentary by Jang Sun-Woo The Cinema of the Road: A Personal Essay on Cinema in Korea. In this interview Lee Jang-Ho, once an assistant to Shin Shang-On and director of the important New Wave film Declaration of Fools (1983), relates how “to make films under our military presidents meant accepting compromises.” Most tellingly, scripts had to be approved during each of the successive military governments: President Park Chung-Hee (1961-1979), President Chun Doo-Kwan (1980-1987), and President Roh Tae-Woo (1987-1993).

Critic Tony Ryans relates the military rule context of the first New Wave in opposition to China’s Cultural Revolution: “The equivalent primal trauma for the young Koreans was the uprising and massacre in Kwangju in May 1980, the shocking event that sparked off 13 years of ferocious anti-government activism and (in 1993) led to the end of militarist rule and the election of South Korea’s first civilian president, the former oppositionist Kim Young-Sam. The Koreans, in other words, were marked by an event more like the 1989 Tiananmen Square massacre than the protracted collective mania of the Cultural Revolution” (which in Ryans’ view is one of the reasons why it has taken longer for Korean cinema to make inroads abroad: not having an event with the universal and historical connotations of the Cultural Revolution) [“Korea’s New Wave” in Sight and Sound, Vol. 4, No. 11, November 1994, p.22]. Other key figures from this New Wave period include Chun Ji-Young (White Badge, 1992, Life and Death of the Hollywood Kid 1994), Park Kwang-Su (Black Republic 1990, which plays in the festival, and To the Starry Island), and Lee Jang-Ho (The Man With Three Coffins 1987).

The recent film from director Jang Sun-Woo, Timeless Bottomless Bad Movie, which played at the 1998 Montreal World Film Festival, is an example of the sort of socially and politically daring film that would never have been made under a military president (a gritty, provocative film shot on video and transferred to 35mm in which homeless teens are given the reign by Jang Sun-Woo to dramatize their own life). Daring social subject matters are evident across many of the new Korean short films being screened at AmérAsia: suicide (Picnic, Suicide Note), incest and teen angst (Girls Nite Out), urban crime (Link), pornography (Simultaneity). One of the qualities of this new found freedom of expression as noted by Peter Rist is the frank approach to sexuality and gay themes. When asked to elaborate on this however, So-Young Kim was hesitant to bestow the tag of “progressive” on these films, pointing to the still present problem of sexual abuse and rape in Korean society.

All things considered, Korean Cinema, young and old, seems in better shape than many national cinemas. For starters, Korea is one of the few capitalist nations with a quota system in place that ensures play time for Korean films: 145 days of the year, or about 30-40% of screen time. However, there has been recent US pressure in the form of a trade visit by powerful lobbyist Jack Valenti and his henchmen to dismantle the quota system. The issue remains unsettled, but the event has unified Korean filmmakers of all stripes into a common solidarity front which has seen directors take to the streets to protest and spread their message, the likes of which has not been seen since the days of “May 1968” in Paris, France.

As with anything new, AmérAsia will surely suffer growing pangs in its attempt to situate itself within an already saturated Montreal Film festival scene. Given its slant and the amazing wealth of Asian cinema to draw from, I hope that indefatigable festival organiser Anna Mi-jong Lee and the AmérAsia team persevere to become a fixture on the Montreal film festival scene. They, and we, deserve it.