by Douglas Buck February 23, 2020 6 minutes (1268 words) 35mm (L’Inferno and The Black Cat) and 35mm-to-Digital (The Devil’s Cabaret) Anthology Film Archives, part of the program “The Devil Probably: A Century of Satanic Panic”

Having recently re-watched the devilishly fun, (Jerry Goldsmith-)chanting “Omen” trilogy (followed up, unfortunately, with the deplorable, reaching-for-creative-mediocrity-in-every-conceivable-way 2016 A&E single-season series “Damien”), and taking the concurrent scheduling of a Satanic film program at the Anthology Film Archives during my latest trip to the Big Apple as a sign, I jumped right into a few of the selections, starting with this fantastic silent cinematic journey into the very circles of Dante’s infamous Inferno itself (nothing less, apparently, than the very first feature film ever made in Italy!).

As I sat in the darkened theater, in total silence — no live musical accompaniment and a (thankfully) mostly respectful crowd – peering through a slightly faded and scratched portal (the print, I believe, was off the latest restoration, but even that comes from material over 100 years old!) to bear witness to the creation of one wild, surrealistic landscape after another (brought to life one static wide shot after another, which is what the entirety of the film is), ambitiously (and brilliantly) recreating one evocative Gustave Doré illustration of Hell at a time, I can’t really express how blessed (feel free to assume I’m connecting that word to something religious — just not an organized one, thank you very much) I felt to experience that feeling that comes with many of the imaginative epic silent films of a century ago; that is, the childhood state of being transported entirely into an imaginary, long-vanished world.

As Dante and Virgil stumble through the multi-layers of Hell, bearing witness to the horrifying plight of the multitudes of suffering sinner dotting the landscape, many familiar to Dante – with some buried up to their heads in burning lakes of fire as far as the eye can see, or stuck in freezing cold rivers for eternity – while being menaced by the winged horned demons who rip and prod at them as they continue their voyage… with their only hope for salvation for hero and poet to reach and face the fallen angel himself, Lucifer, who stands before the way out (chomping endlessly on churned up humans fated to never die, only to be chewed on forever), it’s hard to imagine just how ambitious this film must have been at the time.

While the occasional crude cinematic trick (such as, say, being able to see the black suit covering the body of the disembodied head carried by the decapitated man – an image, naturally, replicated in grand style from the Doré illustration) or glimpse at a primitive early optical effect (such as the immobile, clearly puppet sea creatures moving to land and merging with humans through awkward stop motion and dissolves) might have garnered a dismissive snicker or two from the audience (I did say they were ‘mostly’ respectful – which is kinda all you can hope for in a rep-house today), these supposed flaws are far from failures, but deep evocations of psychological imaginings, of things buried within — dream state invocations – rendered even more provocative by the inclusion of these occasional oddly rendered old-school constructions.

As I argued in retaliation against an even louder sect of low-brow snickering hyenas after the first time I saw the film at a 2018 Fantasia Film Festival screening, cinema, in its purest form, is a replication of a subconscious dreamscape… and, sorry but we don’t dream in CGI imagery. We dream in awkward beats, witnessing shifting odd imagery and erratic signifiers everywhere. The terrifying thing about a nightmare is that it doesn’t look real, nor operate in a logical manner, yet somehow we’re convinced it is while we watch. It’s this kind of experience that so deeply informs an experience like L’Inferno with its vision of a demonic Hell constructed with complete conviction, odd riffs and all.

Saying that, though, don’t get me wrong. L’Inferno is filled with incredibly rendered and grandiose stage construction set pieces and profound imagery of naked (kinda startling how much nakedness there is in the film) humanity enduring endless metaphorical punishments made literal, that remains mind-blowingly impressive. Its vision of the traditional physical Hell, filled with packs of demons and suffering, is cinematically second to none that I know of (why, the sheer artistic ambition of the film was so big it took three combined directors to make it!).

As I mentioned, I saw L’Inferno the first time, in restored HD format, a few years back at Fantasia, only that that one was joined with a live electronic score by none other than the great Goblin’s own Maurizio Guarini. And while I deeply adore all the crazy sounds and musical wizardry Guarini has contributed to many of the greatest Italian horror films, I have to say… I found his scoring for the 1911 film clashing with the vision on the screen. While the score itself was good, it gave the impression it wasn’t fully fleshed out or entirely conceived to merge with what it was accompanying. Watching the film purely silent at Anthology, while a more fascinating and engaging experience, has me wondering what Tangerine Dream conjured up for the official restoration release. 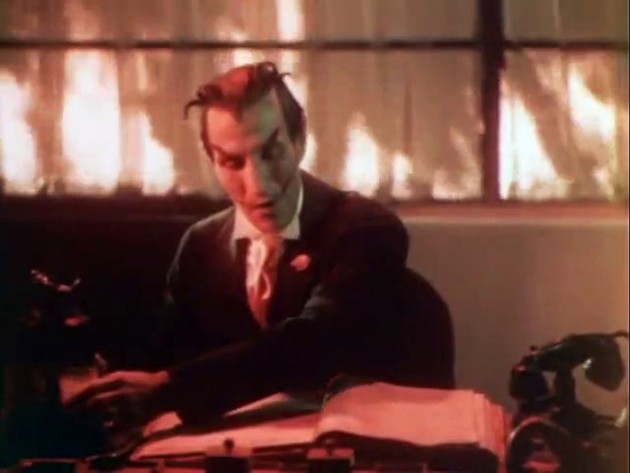 Playing before the 68 minute L’Inferno was The Devil’s Cabaret, a pre-code (with the decidedly skimpy outfits on the dancing girls being the giveaway) technicolor short detailing, in only semi-sardonic style, how the Devil’s minions lead unsuspecting thrill-seekers to Hell by coercing them into giving over to the musical temptations at a local nightclub (cuz, we all know song and dance is the sure path to eternal damnation!). While the humor isn’t particularly clever, the acting a bit too over-enthusiastic and the dance numbers mostly forgettable… the red hues in the scenes ‘below’, the sense of heat, and the omni-present burning flames just outside the Devil’s offices work nicely together. It may be a less grandiose and more tongue-in-cheek cinematic vision of Hell than L’Inferno, but it remains evocative and imaginative, and was more than worth a look.

To add even more devilish indulgence into the night’s Satanic brew, the Anthology screening that followed was none other than a gorgeous 35mm print of that truly stunning, perverse invocation of the Uncanny known as the The Black Cat from 1934. With Boris Karloff delivering a stand-out performance as Poelzig, a cruel and cold-hearted Satanist, the character apparently inspired directly from infamous occultist Aleister Crowley (yep, the “Mr. Crowley” that Ozzie was singing about), Bela Lugosi gifting us with a performance so complex, tragic and haunting it’s like nothing else he ever did and never ceases to captivate me when I re-watch it (which has been many times by this point), striking art deco set designs (just so ahead of their time) and expressionistic lighting, and wall-to-wall bombastic classic music score, all with that most under-appreciated of filmmakers Edgar G. Ulmer (one of these days I just gotta get around to that biography I have on him sitting on my shelf) clearly relishing in guiding this pre-code tale’s lurid subject matter, overrun as it is with heightened perversity (I mean, we’re talking the horrors of war, pedophilia, necrophilia, murder, incest, satanism… and that’s just the start!) and ending with a startling scene of revenge involving skinning a man alive, it was the perfect way to end the night; especially so, upon learning, on the way out of the theater, that this current program is only an early primer for a much larger Satanic series of selections the Anthology programs have brewed up for later in the year. I’ll certainly be on the lookout.