Subterranean Passage is a meticulously layered visual puzzle that slowly unravels through a series of echoing motifs on the wonder and resiliency of childhood imagination. At 31 minutes, Subterranean Passage is structured around variations on the theme of childhood escape from the cruel harshness of adult reality. One of the first sounds we hear is the voice-over of two adults arguing. We never see these two people; instead they become disembodied voices that represent familial discord between adult/parent and their offspring. The sound immediately establishes an ‘unfriendly’ parental environment that is answered by a poetic, at times disconcertingly surreal environment that is a product of childhood imagination; an imagination that is sometimes fanciful, and other times dark and brooding.

Subterranean Passage broaches narrative, but remains firmly entrenched in the tradition of experimental narrative, and is content to weave a collage of visual/aural association rather than clearly rendered cause and effect character/narrative development. Writer-director Michael Crochetiere explains, “In some ways, Subterranean Passage inhabits that no-man’s land between abstraction and narrative. One sees characters on screen apparently motivated to act…yet there is no real linear story. I consider the work to be “experimental narrative” in that it uses variations on the linear cause and effect model.”

The film opens with a warmly lit image of a fair-haired boy looking in through a wood window. Over this image we hear the portentous voice-over of two bickering adults, which immediately establishes this sound as an abrasive, unwelcome intrusion into the representative childhood fantasy mindscape. At the same time the voice-over represents the reality from which the children escape. A reality founded on parental love gone sour. This separation between parent and child forms the film’s central emotional core (represented by close-up shots of a rope being pulled apart). The pain internally felt by the children becomes sublimated into varying forms of fantasy. Objects, images, and thoughts become escape valves for the children: painting, various forms of water (sea, tears, aquarium), the sky, sandcastles and dragons, flying, and story telling. As one of the children tell us, “Early on I learned that stories can save you.”

There are four children seen in the film, two holding more prominent roles, a Caucasian girl (the artist) and a Caucasian boy with blond hair (the sailor); and an African American girl (Annabel) and a boy with black hair (a helper). However, the way the film is edited, keeping the four children for the most part isolated and linked in their actions and dress, suggests that they can also be interpreted as projections of one character (the artist being the most likely whole character). 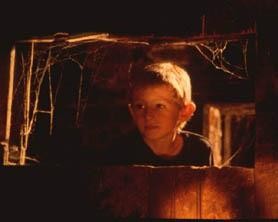 With the film’s intriguing second shot, Canadian director-writer Michael Crochetiere establishes the film’s reality as a psychic space (or what writer Bruce Kawin calls ‘Mindscreen’), a space that at once appears physical and real but contains just enough of the unusual and the surreal to let us know that what we are watching is figurative and poetic. In a fluid, long take steadicam, the camera moves toward an adorned iron gate. Immediately behind the gate are trees and a non-natural light source. The gate opens and the camera moves through the opening. Accompanying the sound of the opening gate are chirping birds. We appear to be in an outside space but behind the trees we can make out a sparsely lit room. The camera moves further into the space to reveal what appears to be a child’s bedroom. We see a bed, a night table, and a boy, bathed in mannered, splintered lighting. The camera continues to dolly toward a second child, a girl seated at a desk, painting. The camera encircles her to frame the bed and boy in the background (the only time we see two children in the same frame). The bedroom appears as both an interior and exterior space. Likewise, in a later scene we see the blond boy on the beach building a sandcastle. Then in a subsequent shot we see him in the bedroom lying in a sandbox, with a toy sailboat, a white duck, and oversized, cartoonish soap and shampoo boxes. But what gives the image a surreal quality is the sight of the sand quivering as if it were water. In effect, it is a sandbox-bathtub (this confluence of sandbox and sea appears again in a striking overhead angle). Such slips between the inner world and the outer world, perception and the imagination, occur regularly in the film. This unusual confluence of interior mental space and exterior physical space is reminiscent of Andrei Tarkovsky, and functions to a similar end: to represent interior states of mind and the imagination through physical space. In this case the bedroom becomes a figurative (and at times literal) playground of the children’s imagination.

Director Crochetiere’s early noted variations on the linear cause and effect model is apparent in the way the film edits between subjective planes of reality. In the film’s second shot we see the artist painting a picture of a boy. In a sense, the boy we see behind her in the background is an external manifestation of her painting. This type of progression in states of reality occurs many times in the film. For example, in the sequence of shots that progresses from a shot of the artist’s painting of a sailboat (art), to a shot of a child-like construction of the sailboat (imaginary), to a shot of a seagull flying through the sky (reality). In another example, the film cuts from the artist looking longingly into an aquarium, dropping pebbles into it, to a shot of the boy standing at the edge of the sea, throwing pebbles into the water. Such associative montage between children occurs throughout the film, and is why one can read the four children as multiple aspects of one child.

Though much of the imagery in Subterranean Passage has a fairytale quality (sandcastles, dragons, flowing white gowns), there is also a dark side to the imagination, which partly accounts for the intertextual use of Edgar Allen Poe’s poem “Annabel Lee” from Tales of Mystery and Imagination. One of these darker moments is an imagined scene of imprisonment. Appropriately, the scene changes to black and white (a fantasy within a fantasy). The artist is dressed as a prisoner, pacing in a harshly lit chiaroscuro cell. The sound of adults arguing is heard again in voice-over. Then we hear a young girl in voice-over recite the following condemnation of adulthood: “Deceit has a yellow hue. And smells something like trust. The art of deceit must be carefully cultivated. It is part of becoming mature.”

Much of the film’s text (all in voice-over), like this latter line, achieves a poetic resonance equal to the imagery. A good portion of this comes in the form of original poetry by Crochetiere and Barbara Klar. But the text never feels gratuitous because it is always engaged with theme or imagery (as in the above passage). For example, the following lines draw on both the psychological nature of the childhood fantasies and the way that water is used as a symbol of sanctity and repose: “There is magic in water that draws all men away from the land….The sea, where each man, as in a mirror, finds himself" (from Herman Melville’s Moby Dick).

The use of Poe achieves a similar harmony of form, content, theme, and imagery. Verses from Poe’s “Annabel Lee” are read on six occasions. One of the more beautiful passages is the following: “But our love, it was stronger by far, than the love of those who are older than me. And neither the angels in heaven above nor the demons down under the sea can ever dissever my soul from the soul of the beautiful Annabel Lee.” At one level the passage alludes to the disharmony between the young and the old. But the word ‘dissever’ refers to the film’s central symbolic image: the close-up shot of a rope about to be pulled apart and severed. The breadth of its meaning comes together in the penultimate scene.

This scene begins with the artist opening the face of the clock on her bedroom wall, as if it were a wall-safe, and revealing a glaring white light and a room full of steam pipes. The steam pipes echo an earlier shot the blond boy shoveling coal into a stove oven. The full impact of the meaning behind ‘severance’ comes together when we hear the faint voice-over of the mother saying, “if we never have kids”. These painful words are followed by a disturbing montage that is punctuated with an ominous soundtrack: a rope being torn in two, smoke encircling a child’s face, a close-up of a black goat, concluding with a cut to a peaceful image of the girl-artist seated in a field. The rope being pulled apart can be seen as a symbolic expression of more than just the obvious. On the one hand it represents the umbilical cord, and the primal, biological link between mother and child. But it can also represent the act of emotional ‘severance’ between parents and children. Director Crochetiere notes, “in Subterranean Passage, “surrealist objects” acquire different meanings or poetic resonance contingent upon their context. One example would be the rope, which functions as a metaphor for the parents emotional tug-of-war, as a restraining (or supportive) instrument as Ben [the sailor] hangs upside down, as a barrier on the jetty…or as a toy for Latavia [Annabel] to skip with.”

Much of the film’s oblique imagery, like the one just noted, is symbolic in the best sense of the word: the object or event is not easily reduced to one single meaning. The shots demonstrating various forms of energy is such an example (the steam valve, the steam pipes, the iron stove, and the boy shoveling coal). Fire, steam, coal, heat, all sources of energy, here represent dissipated negative energy: the misspent energy that has driven apart the parents from each other and their children.

The title of the Edgar Allan Poe collection that the young girl reads from, Tales of Mystery and Imagination, can also stand in for this film. The “mystery” being the recent past that has led to the familial estrangement, and the “imagination” being the wonderful escapes into childhood flights of fancy. Even with the portentous penultimate scene with its images of anger and misspent energy and allusions to death and suicide, the film ultimately surrenders itself to a peaceful image: a beautiful long shot of a boy standing on a reef at dawn, with the oncoming day casting a warm glow onto the water. Subterranean Passage fills its visual and aural landscape with the radiance and depth of childhood imagination. It shows that this imagination, in the face of adversity, has the power to heal, but perhaps not the power to eliminate all the emotional scars left within.

Subterranean Passage premiered at The Toronto International Film Festival in September 1999. It has since been screened at several other venues including at The Blinding Light (Vancouver), The Winnipeg Cinematheque and The Athens International Film Festival. The film took the Best Experimental Film Award at both the Nashville Independent Film Festival and at the Niagara Indie Film Fest. Anyone interested in purchasing broadcast rights to Subterranean Passage can contact Reverie Films Inc. at fax: (306) 525-9054 or email: [email protected].