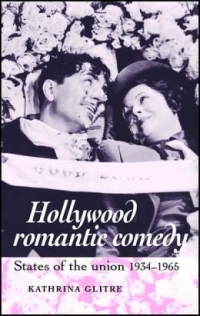 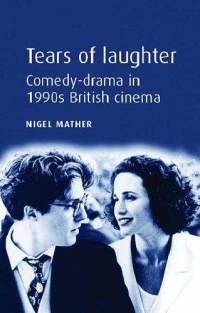 As the aphorism goes, comedy equals tragedy plus time. Film genre’s cultural function as a filter for social anxiety is admirably but very differently explored in a pair of books whose recent publication forms a welcome addition to the canon, itself mutating according to cultural and critical trends.

Romantic comedy is perceived to be quite possibly the most popular of film genres and its characteristic narrative is based on the superficially mismatched heterosexual couple, finally reunited in their pursuit of love once a number of obstacles are surmounted. Katharina Glitre’s analysis of the very watchable Hollywood romcom from the 1930s onwards offers an accurate delineation of the genre and she argues with enviable facility on the themes of all its various discourses, centering on stylistic, narrative and iconographic conventions as well as more politicised concerns – gender, the workplace, homosexuality and even ‘the green world’. The structure of Hollywood cinema as institution lends itself to three clear-cut eras or cycles of romcom production and is presented in the book as screwball comedy (1930s); career woman comedy (1940s); and sex comedy (1950s). The representation of the romantic couple is then systematically examined under the rubrics of love and marriage (and remarriage), gender equality and desire. Despite the political patina of its subtitle, this book is most successful when it privileges the personal and each of the three sections features enlightening discussions of three exemplary heterosexual screen partnerships, which is suitably ironic given that at least three out of six of them (Katharine Hepburn, Rock Hudson, Spencer Tracy) were long known to be homosexual (although not, of course, by their adoring public).

Glitre is very strong in her discussions of key films: Woman of the Year (Stevens,1942) in particular is a complex evocation of the binary structure of gender power; and the continuing destabilising pattern of meaning throughout the career woman cycle offers a fascinating site of post-war ideological struggle as well as cinematic challenges, bringing the game-playing of the previous decade’s films to a different level of sexual complexity and implication. 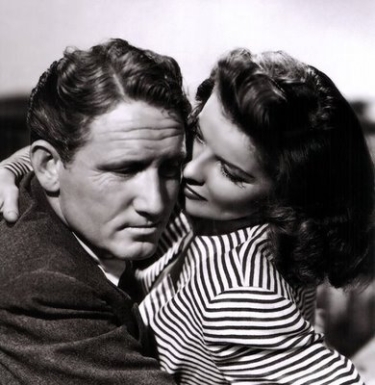 Glitre’s articulation of the cycles’ major themes is grounded in her understanding of technical style (the dramatic crescendoes formed by the variety of shot/reverse shot sizes, for example); the disconnect between the extratextual publicity and marketing needs of the studios versus the ever-changing depicting of female roles onscreen; and the cultural anxiety underlying the steadily more fearful masquerade of love, marriage and reproduction –gleefully and finally put to rest in a bawling baby carriage in the Hudson-Day battle of the sexes comedies, in particular their paradoxical climaxes, giving this uniquely satirical cycle a rhetorical dimension which seems to cry out to its contemporary consumer audience, Buyer Beware. Such an apparent scission with the genre is actually the superficially thin end of the vernacular’s dramatic logic. Desire, pshaw.

Ultimately this is a very readable companion piece to a more astringent work such as Wes D. Gehring’s masterful Screwball Comedy: A Genre of Madcap Romance (Greenwood Press, 1986), a book which the author readily acknowledges; it is also an ideal formal work for the aspiring romcom writer, following Billy Mernit’s very witty and insightful Writing the Romantic Comedy (Collins, 2001), which brings the genre right up to date in comfortably knowing and acerbic style.

The generic mutations occasioned by the ravages of time are also succinctly traced through three principal groupings in Nigel Mather’s study of comedy and drama in contemporary British cinema: in this instance, class and community; race and ethnicity; and romcom, are located in the wide and complicated context of British culture. Making frequent and apt reference to disparate entries in film history, the author provides a very readable summation of those constructions in British films which amount to conventions of meaning, despite the lack of those regular, routinised production cycles that have so defined Hollywood cinema. The lack of a framework in the cinematic institution problematises the very thesis of the book, which makes the author’s achievement of categorical schema and his description of the basic syntagms and linkages of the many generic elements all the more notable. With the marked exception of the Ealing films, which were the by-product of post-war nostalgia and boasted a remarkable class of filmmaker behind the scenes, Mather thus acknowledges his basic textual difficulty in analysing British cinema as a whole:

Patterns of continuity and advancement are always difficult to recognise and achieve in the context of British film production, partly because of the lack of structure and central planning in the industry… (176)

Following a detailed introduction, the backdrops to contemporary films are carefully connected historically; and a number of case studies illustrate the particular successes and failings of British films in the last decade. Despite the lack of an obviously generic throughline or consistency, these films, he argues, form a canonical link to the contemporary –from George Formby to Robin Askwith, the teleological line of enquiry creates an intriguing narrative. In common with Glitre’s book, a number of key case studies amply illustrate the oscillating modes of drama and romance.

Mather pinpoints the cultural interstices (and tensions) underlying the occasionally bizarre and twisted output of a disparate and permanently malfunctioning mainstream cinematic institution. Thus does the awkward erupting of the Nineties regional and ethnic comedy-drama receive suitably awkward discussion; Mather’s reading of East is East (O’Donnell, 1999), in common with the critical appreciation it received upon release, sails through its appalling assumption of domestic violence as though it were acceptable merely because it is a form of Moslem expression (and presumably because it is depicted in the diegetic Seventies). Such an (undoubtedly long-considered) oversight amplifies the dominant coda of multicuturalism which strains to be expressed throughout the book –an ethical stance which even Trevor Phillips has admitted no longer works in analysing the proliferation of social and cultural problems which have come to infect the whole of British society. In the racial comedy Secrets and Lies (Leigh, 1996), Mather reminds us that the only character not to be caricatured in the ensemble is Cynthia’s black daughter, yet another example of the difficulties confronted by British filmmakers keen not to offend minority audiences.

A link is argued between the aforementioned Ealing productions and their textually confused successors:

Ealing comedies … clearly benefited from having been produced within a studio system which allowed directors, writers and producers to exchange ideas, and to feel that they were contributing to the formation of a body of work, rather than simply working towards the production of a single film, which might have no immediate or recognisable successor. (19)

With the more disturbing Nineties incarnations Brassed Off (Herman, 1996) and The Full Monty (Cattaneo, 1997), Mather’s dissecting of community life reveals underlying “… images of conflict, dissatisfaction or restlessness” (21) and draws a canny influence from the oeuvre of Ken Loach. The surprising American success of the 1997 film, which turns its unemployed protagonists into humiliated strippers, unveils a society reduced to virtual prostitution in the face of the North-South economic divide, a weird inversion of 1930s comedies in which masquerade necessitates the donning of upper-class costume to gain acceptance into High Society, the only one that mattered in those far-off days. In the Nineties, the emasculating of men is enacted to a comforting dance soundtrack to better disguise the awful, final shredding of dignity. The ultimate irony is that this is presented as a moment of triumph in a freeze frame finale. These groups of films articulate a strong yet confused thematic underbelly of home, belonging and identity, rendered immediately complex by race, ethnicity, unemployment, and the ever-present problems of ongoing immigration and class.

The book’s final section inevitably centres on the cinematic work of a uniquely British auteur, reminding us that the only concession, for instance, to America’s breezy self-confident screwball heroes and heroines in 1930s romcoms were the subtle, comically sexual players in Hitchcock’s thrillers and the more ripened versions in an occasionally urbane (and urban) comedy such as Divorce of Lady X (Whelan, 1937). The Nineties romcom variation might be said to have exhaustively collapsed in on itself with the crassly self-indulgent (Noughties, actually) Love Actually (Curtis, 2003), which commences with the sight of Muslims hugging each other at London’s Heathrow Airport, the proposed scene of so many allegedly foiled genocidal Islamic outrages both pre- and post 9/11. Mather is cautious in his appraisal of Curtis’ embarrassing display of brotherly millennial angst, the culmination of a decade and a half of politically correct posturing and transatlantic fumblings which commenced with his apparently transgressive inclusion of both a deaf man and a gay couple in the screwball-lite Four Weddings and a Funeral (Newell, 1994); and a paraplegic woman in Notting Hill (Michell, 1999). In both films these characters’ abilities to communicate in a kind of semaphore gifts them with the ability to discern the course of true love’s path and provide direction to the misguided. The latter’s titular mono-ethnic neighbourhood led to such a degree of fulminating criticism from observers that this very PR-conscious scriptwriter then decided to insert an interracial couple in his directing debut –which boasts an array of love (and London) in all its sociologically manifest humanity, actually. The film’s final surreal images of the indecisive, irresponsible Hugh Grant (an eternal bachelor in his happily consistent personal and public persona) playing a dithering David Cameron-ish Prime Minister with an Eastenders wifelet (Martine McCutcheon) on his arm, perfectly encapsulates a perversely Hollywood screwball style of cross-class coupling, yet summarises all that is wrong with contemporary British cinema: bad taste, bad timing and withering condescension to the clearly idiotic audience that it imagines might want to view such nonsense. The focus group results that Curtis imagines oxygenate his repetitive material here merely serve to nail it more decisively into its environmentally friendly coffin. (An American example of such spectacular politically correct filmmaking is the ghastly The Next Best Thing, 2001, whose sometimes brilliant British director, John Schlesinger, unsurprisingly died not long thereafter, presumably as a result of complications from embarrassment.) 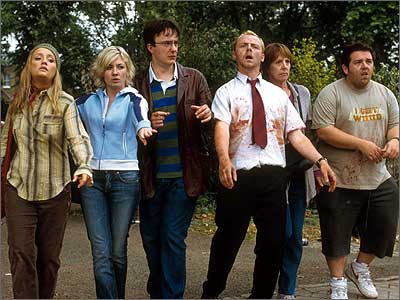 Sadly the book’s thematic lens means we don’t have the author’s exacting analysis of the woefully uncinematic, if endearing, zomromcom, Shaun of the Dead (Edgar Wright, 2004); or the merely woeful Sex Lives of the Potato Men (Humphries, 2004), which is an Equal Opportunities offender. One wonders how the profoundly ideological bent which informs Mather’s unkind reading of Seventies television comedy (as opposed to his generous interpretation of East is East) would interpret these publicly funded event movies. To quote another aphorism, the gods too are fond of a joke: perhaps British cinema is exactly what its public deserves. It’s no laughing matter.