Foreign Correspondence: El Ambulanté and The Act of Killing

It doesn’t have to be a big production like Rank Organization,
Paramount, MGM. We just proceed, step-by-step, to tell our own story.

El Ambulanté (The Peddler), 2010, 84 min.), directed jointly by Eduardo de la Serna, Lucas Marcheggiano, and Adriana Yurcovich, is the spiritual and psychological opposite of Joshua Oppenheimer’s The Act of Killing (2012), in which the outsider-filmmaker (Oppenheimer) catalyzes and documents scenes of violence, retribution, and redemption in a Hollywood style (the conceptualization behind these scenes is not Oppenheimer’s; the thugs responsible for the war crimes loosely depicted and referenced are also responsible for the scenes’ scripting). A notable difference between the two films is their aesthetic and socio-political achievement – Oppenheimer’s film is the more accomplished, having affected a new candor in Indonesia’s relationship with its recent past. That said, it may be useful to the reader-viewer to know that The Peddler offers a kind of emotional antidote to the harrowing odyssey of guilt and denial of Killing, if the two ever happen to be seen back-to-back, or placed on the same program; addressing, for example, the impact of American film culture on foreign audiences. In any case, Killing is currently screening, and The Peddler must be sought (a region 2 version is available on disc).

Despite various formal shortcomings (e.g., the dissolve is a frequent and for the most part unjustified transition choice) The Peddler is a work of joy. A document of consumer empowerment, it follows the unusual means by which a rural film audience admires, influences, and defines film content, in a full filmmaking arc —i.e., from pre-production to exhibition— typically associated with more advanced technologies. The communal, highly interactive process is initiated and organized by an itinerant filmmaker who operates in Argentina’s remote areas, producing feature films in small townships using volunteer ‘talent’. The unusually swift casting, performing, directing, technical support, post-production and publicity is manifestly unprofessional, yet Daniel Burmeister, the catalytic figure behind these cinematic events, manages to eke out a living from the string of shoestring projects he helms each year, often using borrowed equipment, donated food and facilities, and shooting entirely on locations he has little or no previous knowledge of. The resulting features are promoted by word of mouth and by Burmeister himself, with a bullhorn attached to the roof of his ailing car, which he drives through the streets and dirt roads of neighborhoods and town centers —a technique commonly used by politicians in Mexican and South American farming communities. If no traditional film venue exists within walking distance, one is improvised from a civic auditorium or church. Though the arrival of viewers is almost never punctual —something Serna attributes to a distinctly rural sense of leisure time— the screening is nevertheless well attended and received, allowing Burmeister to earn enough money from the door to repeat the cycle in other towns, his way paved by glowing reviews and letters of recommendation from local officials and ministers of culture.

It is important to bear in mind that these screenings, with the boisterous response they elicit, are not celebrations of the pictures themselves but the fruition of their labor, a delight in their fantastic record. The features —epic comedies— are intended for a single public exhibition, where they not only have their greatest impact with the audience they are made for and through, but enable the repetition of the process by which they came into being, preserving the viability of Burmeister’s peripatetic filmmaking, without any apparent concern for the posterity of its cinematic (video) products. In this case a union of screening event and production is achieved that does not benefit from expertise, wide distribution, convenient access, and/or repeated consumption.

The value of the film object is the work it entails, its memory triggered by numerous passages in the completed picture. Viewers are offered the sudden appearance of a cohesive narrative, together with a sense of integrity in the loose script they were given (from a handful that Burmeister continually recycles). Non-diegetic music and moments of frenzied, exaggerated action support stories of love, life, money, and the struggle to retain or regain them. A variety of recognizable interiors and locales are reframed as dramatic fiction, and the cast is entirely local. These aspects of the “world premiere” are necessarily regarded by the audience as directly associated with community life, yet in the manner of cinema, with all that term suggests to participants. The extraordinary reception —what can safely be called the finished picture’s life— is due largely to a heightened and expanded identification, as viewers are publicly presented with their various technical and artistic roles in the picture screened. They are not only the cinematographers and lighting personnel and leads and extras, but the people who are not normally these things, and very likely never expected to be. It is natural then, that the ‘film’ consumed (shot on S-VHS and projected onto a large bedsheet in the documentary) is enjoyed not as an immersive, seductive object in itself, but as a shadow —a crudely appealing one, perhaps, but only part of a larger phenomenon its singular viewership is made privy to. Such insider knowledge is likely connected to another spectator pleasure for these ad hoc screenings and the form of community theater they require. This is the pleasure of laughing, with perfect authority, at the otherwise hidden machinations of the Hollywood product, a staple of motion picture entertainment in the impoverished regions Burmeister works in, whether consumed through recorded tape or disc, television, or —much less frequently— the traditional film venue.

The form of consumer-produced cinema featured in Oppenheimer’s documentary also functions as a back-handed tribute to the imported Hollywood product, though this is expressed by the gangster subjects/film-makers/actors as a complex means of denial. The trailer for _Killing _ claims “We challenge [the subjects] to act out their memories of murder,” but the challenge is the subjects’ own. If it weren’t, if Oppenheimer and his local crew applied any pressure whatever on the thugs that are the stars of the film (and of Indonesia’s anti-communist culture), it in all likelihood would have been impossible to make. Certainly none of the boastfulness and desperation of expression would be in evidence. Nor is it quite accurate to say the camera is a distancing device –that its warping and simplification of events somehow alleviates the weight of culpability these individuals have managed to shrug off publicly for decades, since the genocide of 1965-1966 that inaugurated the Suharto regime. 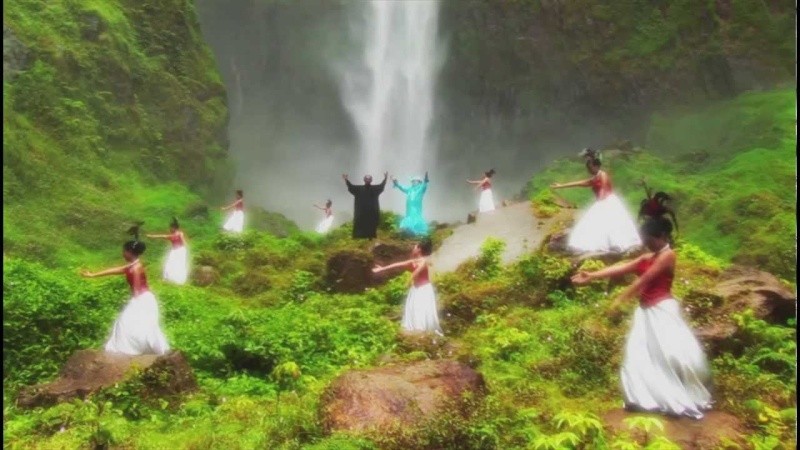 The Act of Killing

The willingness of the subjects to appear on camera and have their criminality documented is in fact startling. (In one segment the camera follows several members of the paramilitary Pancasila Youth as they shake down Chinese immigrant merchants, openly extorting money from each.) Concerning the Hollywood-style ‘reenactments’, the imported artwork has been taken to heart, then reified through crude staging. Refracted through local life and history, the resulting imagery is simultaneously familiar in its genre elements and hellishly foreign in its playful irreverence and morbidity. Anwar Congo, a celebrated killer of “about one thousand,” recalls that after a particularly upbeat American film at the cinema where he used to scalp tickets, he would re-enter the world as if in a musical, returning to the interrogation center to kill “happily.” We survey a large collection of “extremely limited” crystal figurines –among them Tinkerbell– in one former executioner’s opulent home, an aging gangster savoring the benefits of State-sponsored terror. In another mansion, belonging to the head of the death-squad supplying Pancasila Youth, we see diorama after diorama of stuffed exotic animals, and a room devoted to Hollywood memorabilia (Brian De Palma’s Scarface figures prominently).

The staged scenes that break up the film’s more direct reportage are conceived individually, as set pieces with little apparent coherence or timeline (with the exception of one grand, Vincente Minnelli-style finale, in which Anwar is thanked by his victims). The gangster-stars of these surreal vignettes fluidly switch roles from perpetrator to victim, from wounded soldiers and cowboys to showgirls, suited gangsters, and vengeful spirits. The effect is disarmingly fresh and horrific, and one can immediately see the project’s appeal to Herzog (one of the project’s executive producers). When Oppenheimer presented the film recently at the Walker Art Center, both the domestic theatrical release and international release versions were shown, on consecutive evenings. While the longer version (some 45 minutes longer) contains some useful contextual information and a number of longer interviews with the subjects, I would recommend the shorter, 115 minute version if you happen to catch Killing before it leaves theaters (undoubtedly its best viewing context).This is not because the viewer is spared additional horror/s –the longer version is in fact more personable and easier to digest– but because of a number of editing and shot choices that I found superior. The most striking of these comes at the film’s close, when Anwar visits for a second time the former interrogation center that, in an early scene, he danced on the terrace of (in effect the building’s killing floor), but now assays with a new humility, despair, and psychosomatic nausea. In the international version the scene closes with the image of Anwar in the process of leaving the space, paused on a stairway landing between the open-air terrace and the ground floor – essentially caught in the throat of the building between past and present, recognition and escape. The shorter version of the film closes with a longer version of the scene. After pausing on the landing, we cut to a full shot on the ground floor and pan from the bottom of the stairs toward the building’s entrance. As Anwar walks away from the camera toward the door it becomes clear that the former interrogation center is now a shop, the walls on either side festooned with hundreds of gaudy handbags –a supreme image of the victory of Suharto’s New Order ‘reforms’. 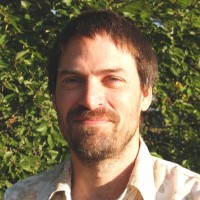 Stephen Rife writes and distributes VIEWFINDER, a monthly newsletter of film and media criticism, printed on paper and sent to subscribers from a disused mail chute in Philadelphia’s former Benjamin Franklin Hotel.