Caveat is a horror film that explores very real human monsters, with a spicing of the supernatural. The eternal struggle of vulnerability against perceived strength, and vengeful spirits looking for retribution, are explored in this story set in the eeriness of physical isolation. Vulnerability is pitted against power, trickery and gaslighting. This power struggle, and the perception that the mentally ill can be exploited, are some of the themes touched on throughout the film through the interaction of its three main characters.

McCarthy has created an interesting character in Barret (Ben Caplan). Here is a man, a coward, with a gift at being able to manipulate others into doing his dirty work. Barret’s talent for spotting someone’s mental fragility and knowing where to stab and twist his metaphorical emotional screws to get them to do his bidding is horrifying. Barret uses this dark social skill quite effectively on both his family members and business acquaintances. Seeing mentally damaged individuals as weak, Barret perceives them as opportunities to manipulate or kill those who could blow the whistle on him for his past nefarious deeds. To this end he maneuvers his niece Olga (Leila Syke) and his friend/business associate Isaac (Jonathan French) into positions where he hopes that they will cancel each other out, thus getting rid of two of his personal annoyances at once.

Barret’s manipulation of Isaac starts very early in the movie when he proposes a job offer to the needy Isaac that he insists he would only entrust to a friend. Taking full advantage of the fact that Isaac has recently suffered a brain injury and has significant memory loss and thus lost any sense of a social network, Barret convinces him that they were friends in the past. With no one else to confer with about the oddity of the situation and no other obvious prospects on the horizon, Isaac listens to what Barret has to say about his job proposal.

Being the master manipulator that he is, Barret postpones revealing the nitty-gritty of the job details until they step foot on the island, the location of the job. When faced with the task of keeping company with a possibly schizophrenic young adult woman whose paranoia requires him to be restricted in his physical movements within the dilapidated home by a chained torso harness, Isaac’s refusal to take on the work is slickly sidestepped by Barret’s use of manipulative guilt when he states that if Isaac doesn’t take on the task, all this effort would’ve been a complete waste of his time.

The sense of social isolation that was previously established through Isaac’s memory loss is extended atmospherically once Barret leaves the island. Left to his own devices and little else to do, Isaac explores the physical limits that the torso harness and chain places on him. He finds that he can’t even walk out the door of the house or use the bathroom and that his only companion, Olga, is both suspicious of him and prone to prolonged unresponsive periods. The island itself offers added elements of environmental isolation. With the use of fog, the director is able to further cut Isaac off from the world by limiting his view of the shoreline. Plus the use of nighttime sound effects for crying baby foxes that sounds like a young girl screaming is artfully used at key moments to startle Isaac into wondering if Olga is in some sort of distress.

Isaac more or less plays along with the odd behaviour of Olga and his bizarre living arrangements, until he discovers the dead body of Olga’s missing mother in the basement of the house. This is enough to rally his sense of self preservation, prompting him to phone Barret for help. Barret is of very little help, and is mostly just concerned for himself, and asks if Isaac has called anyone else. When Isaac says he hasn’t because he doesn’t know anyone else to talk to, Barret again uses Isaac’s social isolation to his advantage to reassure Isaac that he will take care of the situation. 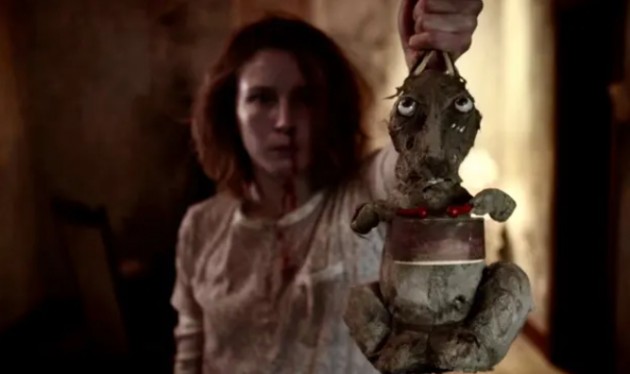 Olga and her eerie toy rabbit

Hopeful that once Barret has returned to the island his sense of isolation and confusion will be relieved, Isaac is in for disappointment. After having freed himself from his physical restraints and reversing that situation by placing Olga in the torso harness, Isaac overhears a conversation between Barret and Olga that reveals that Barret had set up the whole situation to have Olga kill Isaac in order to eliminate the last accessory to the murder of his brother. Finally fed up with being berated and manipulated by her uncle, Olga turns on him and shoots Barret in the shoulder with a crossbow and leaves him to rot in the basement. Never one to pass up an opportunity to gain the upper hand, Barret turns to Isaac, whom he believes is in the wall compartment where Olga’s mother’s body is located. Telling Isaac that if they team up together they can overpower Olga, little does Barret know that he is alone with the vengeful spirit of his sister-in-law who is now on the move to get the retribution that she was craving.

After hearing the brief conversation between uncle and niece Isaac realizes that he truly is alone in the world. It is up to him to better his situation, so he takes his fate and life into his own hands. Escaping the house through the ductwork, Caveat ends with Isaac releasing the tied up watchdog, giving them both freedom from the physical restraints that have kept them in this isolating situation throughout the movie. By walking away with the dog, Isaac is showing a new strength of character where he has learned he must rely on himself to better his situation and that he has the ability to help others, like the dog, who are also experiencing unhealthy solitude.

The conclusion left me feeling that all of the actions that Isaac performed were fully justified given the emotional and physical scheming that Barret put him through. It was fully satisfying to see Isaac walk off the property with the dog in hand, while leaving Olga behind trapped in the house and her uncle locked and possibly dead in the basement. Standing up to those in power and voicing concerns about unsafe conditions that can be found in the workplace is something that even those who have mental illness should feel they have the right and safety to do. They should not be emotionally and physically maneuvered into situations that are unsettling or even traumatic; the exploitation of the mentally ill as targets of manipulation is a very real problem in all areas of society. Damien McCarthy has explored this social issue in great depth and artistry through Caveat with the use of not-so-subtle symbolism (constraining harness, claustrophobic spaces, dark, somber lighting, a creepy toy rabbit that beats a drum when sensing danger). The use of supernatural elements was a wonderful tool to motivate Isaac out of his sense of powerlessness and a call of action leading to the taking control of his own physical safety. Caveat is an inspiring, empowering tale of how people should speak up without fear when situations become uncomfortable or dangerous. Regardless of social status, a person can only be pushed so far before they fight back and take a stand. In Caveat Olga and Isaac are two wounded animals who bite back at their oppressor. 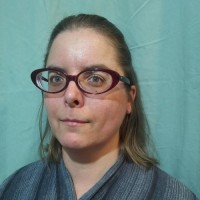 Adeline Panamaroff is a freelance writer located in Edmonton, Alberta. Her work has appeared on Anime News Network, StarTrek.com, Yatta Tachi, among others. She enjoys writing about the little details in horror movies, manga and anime, things that may escape the casual observer.