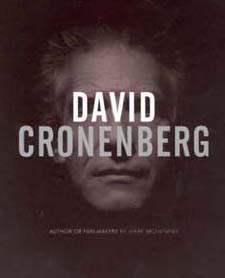 The publication of a new book-length study of director David Cronenberg and his films is a welcome event, especially since Cronenberg’s two most recent films, A History of Violence (2005) and Eastern Promises (2007), constitute what many consider a significant departure from his earlier work in terms of subject matter and genre. Given the wealth of critical discussion on Cronenberg’s earlier films—the only notable exceptions are the oddities in his oeuvre, such as his early shorts and the racing movie Fast Company—it is interest in these two most recent films that will draw readers to any new book about Cronenberg.

Since not every critical project requires the discussion to be up-to-date to the last minute, it would be unfair to blame Mark Browning for discussing neither A History of Violence nor Eastern Promises in his new book David Cronenberg: Author or Film-Maker?. Still, the earlier of the two films, A History of Violence, must have already been released before the completion of the book because Browning mentions the film twice; on both occasions, it is brief and in passing, which exacerbates the disappointment some readers might have already felt about the omission of Eastern Promises. Without the benefit of historical serendipity, however, the burden is on Browning to make his mark with a discussion that approaches the Cronenberg canon from a new direction.

In the course of a lengthy introduction, which works through every conceivable critical angle that critics have taken on Cronenberg, Browning does introduce this new approach: he wants to place Cronenberg in a literary rather than a cinematic context. This is not so much to create a map of influences on Cronenberg’s work. Instead, Browning proposes a broader model of intertextuality, more indebted to poststructuralist notions of delimited, free-floating signifiers than to the Oedipal model of influence. Conceivably, this approach might work to highlight aspects of Cronenberg’s work that previous, more conventional readings have overlooked or unduly downplayed.

Following a chronology that starts with Videodrome (1983), the six chapters of the book focus exlusively on Cronenberg’s later work between 1988 and 2002: Dead Ringers, Naked Lunch, Crash, eXistenZ, and Spider. This phase of Cronenberg’s career coincides with a decisive move from low-budget exploitation specialist to respected auteurist filmmaker, and has already been covered by other critics, most notably William Beard in his massive study The Artist as Monster (2001, updated paperback edition in 2006). Browning sets out to propose an approach to Cronenberg that emphasizes, as the book’s somewhat vague title tries to signal, what Browning considers the “literary” contexts, as well as their concrete manifestations in the films, that set Cronenberg apart from other directors who tend to be more deeply rooted in the cinematic tradition. This approach makes immediate sense considering that all the films under discussion are adaptations from novels, except for Videodrome and eXistenZ. Given the breadth of his approach, Browning can proceed untroubled by these two exceptions, or by the fact that Cronenberg’s source material ranges from the forgettable (as in the case of Dead Ringers) to the staunchly canonical (as in the case of Naked Lunch). Browning’s strategy, figuratively speaking, is to strike two texts together and see if they produce a spark—a strategy that may strike many readers less as argumentative and analytical and more as intuitive, associative, and creative.

If we look at vast array of intertextual references Browning suggests in the course of his argument, we will find some that make immediate sense (J.G. Ballard, William Burroughs, Patrick McGrath, or even Clive Barker), while others make sense after some deliberation (Nabokov, Dostoevsky). Others, however, remain far-fetched even after Browning makes his case for why they are relevant to Cronenberg. It is particularly this last category that remains troubling: what in the world could be the link between Cronenberg and Brian dePalma (139), John Barth (103), Rose Tremain’s novel Restoration (93), Bruce Chatwin’s novel On the Black Hill (90), Bernard Herrmann’s score for Psycho (144), T.S. Eliot’s The Waste Land (145), E.M Forster’s Room with a View (149), or Emily Bronte, Charles Dickens, and Orson Welles (181)?

Browning’s answer to this puzzled question is analogy. Bernard Herrmann’s score to Psycho is like Howard Shore’s score to Crash because both use “4/4 time, an ostinato rhythm and [are] constructed with the same undulating semitone motifs that deny a sense of resolution at the end of each musical unit” (144). While Browning’s analysis of Shore’s music is solid, it remains arguable whether the reference to Herrmann is necessary at all: yes, they are similar, but so what? In the case of Rose Tremain’s novel Restoration, the analogy is even less useful, even though Browning considers the novel a “useful parallel text,” pointing out that its “opening is strikingly similar to Cronenberg’s film Dead Ringers” (93). But are striking similarities enough? Is it enough to point out that the “description of [Ian] McEwen’s hero [in The Child in Time] might equally describe Cronenberg’s Spider” (183), or to interpose the word “similarly” between Nabokov’s Ada and Pale Fire and Four Weddings and a Funeral in order to make a point about Cronenberg’s eXistenZ (173)? An echo chamber of intertextuality, the book is riddled with assertions about analogies, similarities, likenesses, and resemblances.

The question remains whether this playing on analogy does, in fact, produce the desired results. What is to be gained by an assertion that, for example, this or that director or film or novelist or literary character, is, more or less, like Cronenberg, his characters, or his films, especially if this assertion comes with neither the claim to discover a vector of influence nor to trace a cultural pattern, textual morphology, or social condition larger than which applies to the two items compared? The end result of such an argument is an exercise in the course of which an extremely well-read author discovers traces of his topic everywhere he looks—a process that is fascinating and intellectually stimulating but produces little original insight into David Cronenberg and his films.

These problems with the coherence of the larger argument are oddly reflected in the publisher’s decision to separate paragraphs from each other by skipping a line, leaving each new paragraph’s first line unindented. Instead of suggesting steady forward progression, this creates discrete blocks of text placed next to each other—a visual image that corresponds to the impression that the argument itself does not cohere over longer stretches of text but, instead, moves forward in an impressionistic, fragmentary manner. Even though each segment provides moments of great insight, based on subtle perceptions and nuanced readings, it still fails to integrate all these insights into one coherent argument.

Even when Browning is assembling the intertextual field in which to place Cronenberg, he is mostly responding to ideas and tropes within the already existing critical discourse. Readers are in the hands of an intelligent, widely read, and theoretically well-informed author, intimately familiar with the entire body of Cronenberg criticism who provides occasional glosses that expand or modify tropes within the critical discourse. In the final instance, however, this author knows too much. Deeply involved with his subject and his fellow critics, he struggles to step out of the shadow of his stronger, more original predecessors—a struggle that, after he has accounted for both Cronenberg and his prior commentators, leaves him with little to say that is genuinely new. Its mix-and-match sampling of ideas still makes the book interesting to readers who have only recently come to Cronenberg; these readers might even enjoy the long introduction in which Browning assembles all but the theoretical kitchen sink in an attempt to locate Cronenberg in relation to the major theoretical positions within academic discourse. But for readers familiar with these positions, readers who have been following Cronenberg’s career and his shifting assessments within academic discourse, the book has little to offer that is new.

Steffen Hantke has published essays and reviews on contemporary literature, film, and culture in journals and anthologies in Germany and the U.S. He is author of Conspiracy and Paranoia in Contemporary Literature (1994), as well as editor of Horror, a special topics issue of Paradoxa (2002), Horror: Creating and Marketing Fear (2004), Caligari’s Heirs: The German Cinema of Fear after 1945 (2007), and, together with Rudolphus Teeuwen, Gypsy Scholars, Migrant Teachers, and the Global Academic Proletariat: Adjunct Labor in Higher Education (Rodopi 2007). He teaches at Sogang University in Seoul, Korea, in the American Culture Program.