Caligari and Hellraiser: A Lineage

‘Cesare! Do you hear me? It is calling you:
I, Dr. Caligari… your master… Awaken
for a brief while from your dark night…’
The Cabinet of Dr. Caligari (1919)

Contrarily, in Clive Barker’s Hellraiser (1987) it is not the somnambulist Cesare who awakens from a dark night, but four dreadful Cenobites (in Italian they are called the equally splendid ‘supplizianti’, which means something like torturers), ‘demons to some, angels to others’ coming from a gloomy and bloody parallel dimension to retrieve their Chinese puzzle box and, possibly, a soul or two. In this brief essay I would like to analyze the genealogy between a must-see of contemporary horror and Robert Wiene’s German expressionist masterpiece and landmark psychological horror movie (before there was a film genre called horror), The Cabinet of Dr. Caligari, a film which introduced much of the iconography of the terror-film. 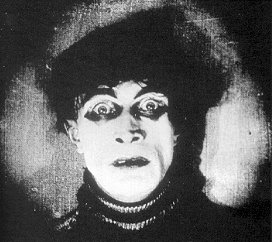 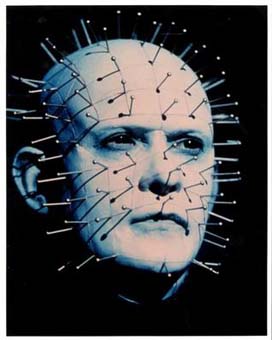 Both films have a circular structure which corresponds to a circular and perhaps endless plot as well: The Cabinet of Dr. Caligari opens with a circular fade-in from black which introduces the framing device; Hellraiser starts in the same way, with a zoom-out from the circular centre of a box (in which opening titles have disappeared). And they also both conclude utilizing a similar device. Obviously, coming some 70 years later, Hellraiser is different from Robert Wiene’s classic because it is a gruesome, neo-gothic horror film, realised under the symbol of blood, full of signs and visions immersed in body art and underground culture, oriental philosophies about reincarnation and pagan mysticism, horror literature, and the representation of a hedonistic society. But the poetic core of the film also finds its roots in German expressionism and, therefore, in its cinematic prototype.

The nightmarish, bizarre and distorted world of Caligari – ‘subjective projection of a diseased Germany after the First World War’ [1] – is, after all, the same as Hellraiser. The audience enters in media res into an endless nightmare: in Caligari a disorientated man tells his story to a patient, and the audience becomes immersed in the tale; in Hellraiser a mysterious man with horrible blue nails purchases an ornate, rubrik’s cube-sized box and then loses himself within it.

‘The Cabinet of Dr. Caligari invites its audience to explore a mise en scene that sets live actors and solid furniture into stylized exterior and interior sets painted onto theatrical flats and photographed by a camera which moves relatively little. Its flowing narrative does, however, make significant though sparing use of cross-cutting, flash-back, reductions and expansions of the image-field, high-angle shots, low-angle lighting, split screen, quickly flashed or long-held images, and other devices of the early film.’ [2]

While the lighting exaggerates the contrast between dark, dead zones and white zones and accentuates the angularity with over-exposures and chiaroscuro, the mise en scene presents theatrical, anti-realist sets to create an odd world in order to disorientate the audience.

If in Caligari there are references to the painting of Edvard Munch (the famous, marvellous The Scream is quoted in one scene), and Karl Schmidt-Rotluff and to Picasso’s cubism, in Hellraiser there is instead a reference to the labyrinthine and suggestively claustrophobic artwork of the Dutch artist M.C. Escher. As for literature, Caligari owes much to the fantastic and ‘uncanny’ touch of tale-writers E.T.A. Hoffmann and Achim Von Arnim (as Prawer wrote in his book Caligari’s Children, page 173: “There is a Hoffmannesque twist, however, to this story of Caligari the ‘stranger’: for just as in Hoffmann’s “The Sandman” the sinister itinerant vendor of spectacles is identified with a respected local lawyer, so Caligari, as it turns out, is very much part of the little town he terrorizes in the inner story. He is, after all, the director of one of the town’s most necessary institutions.”); while Clive Barker’s eerie world –populated by majestic nightmares, bloody creatures and sadomasochistic fantasies [3] – is indebted to Lovecraft’s terrifying imaginary.

The Cabinet of Dr. Caligari and Hellraiser have the same cinematic structure because they are both, at heart, adult fairy tales (evident in Caligari’s asylum set, with the sun-ray filled square, the tree-trunk door and the wall’s corridor-like branches); these two gloomy and dismal far-out fairy tales are influenced by the literature and the collective imaginary of the high times in which they were realised: a chaotic and dangerous Germany in which, literally, ‘the sleep of reason gives birth to monsters’ [4] and a similar metropolitan America, victim of its existential weakness due, paradoxically, to its financial riches. And, in this way, Goya’s shining sentence proves to be even more truthful: the human being, blinded by his pride and by the mirage of absolute pleasure (which, with admirable narrative and symbolic intuition, coincides with absolute pain), has to fight with its real unconscious monsters, which are so real they tear to pieces flesh.

In both Caligari and Hellraiser the use of lighting –with lights and shadows which fragment an already threatening environment– and over-exposed shots, have a functional aim (and the use of immediate and unexpected flashbacks demonstrates this as well): to invite the hypothetical audience member to lose themselves or, otherwise, believe in what they are watching; the viewer needs to dream or, better yet, to use Freud’s own words, ‘to suspend any incredulity’. And the climactic sequences of both films demonstrates this well.

In Caligari, the climax –apart from the awakening of Cesare, achieved with a slowly mounted editing of close-ups of Cesare’s face and shots of his master Caligari and of the on-screen audience– is the abduction of Jane by the somnambulist Cesare. Here is how it appears in the original script:

In the night a shadowy figure makes its way along a garden fence and the wall of Olfen’s house. In her bedroom Jane is sleeping, the moonlight shining through her window… A shadow appears behind the window and slowly opens the window from outside… Cesare stands in angular posture by Jane’s bed, as she breathes quietly in her sleep. Suddenly as if at a command, Cesare raises his arm, in which a dagger gleams, while his other hand goes to Jane’s throat. Jane starts up, giving out wild, terrified shrieks… 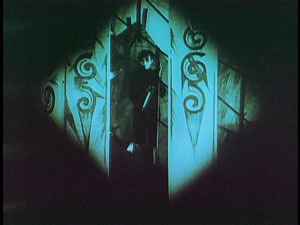 It is enough to quote just the beginning of this ‘archetypal confrontation between Cesare and Jane’ (Prawer, 1980, p. 179) because it offers so much: first of all, it is (obviously) night, the mystery moment par excellence. Then we see, as Robinson wrote, ‘the androgynous and sexually fascinating Conrad Veidt-Cesare gliding along the wall of Jane’s house like a shadow that has lost its body’. [5] The shot is slightly oblique, the contrast between black and white zones strong, and the set is deformed (the wall seems to contain hands pointing out Cesare’s guilt): the impression is stunning. The abduction scene in Jane’s bedroom is potent as well, with Wiene inserting close-ups of the external environment (window with shutters which confer a strange lighting) and of Cesare’s desperation in the edited narration. The skilful escape on the slanting roofs and an upset Cesare’s abandonment of the unconscious Jane along a path surrounded by sparse trees recalls the story of Beauty and the Beast. The poetic final scene of this sequence, which shows ‘the Beast’ caressing a flower, instead, suggests the climax of Clive Barker’s Hellraiser: a young girl, nephew of the ‘human’ villain of the film, has just stolen the mysterious box and, feeling weary, faints. Suddenly, a fade-in shows a close-up of her bloody, almost human uncle changing into a blooming and withering rose against a black background. The transformation communicates a sense of a frail life and imminent death, a sense of a physical and moral meltdown which will find a follow-up in the ‘Cenobites’s sequence’: the girl wakes up and, after carelessly opening the box, finds herself in another dimension, chased by a monstrous creature and then threatened by four Cenobites. The lighting is cut through by fog and is slightly over-exposed; the diegetic sound is dark and grating; the mise en scene of the set becomes less essential, as the editing privileges close-ups of the Cenobites, especially the figure of their leader Pinhead, who utters his remarkable presentation speech. As in Caligari, Barker exploits the power of images to go beyond the simple horror movie and to present an unreal world in which a viewer must find, under a blanket of symbols, his real self or the real society in which he lives, with its hopes, its fears and its doubts. Sixty-nine years span Caligari and Hellraiser: the means may have changed, but the purpose —to depict a terrifying nightmare— remains the same.

Roberto Donati (from Arezzo, Italy) graduated in Modern Literature and Film Studies from the University of Siena in Italy, and also studied in the UK (The University of Warwick). Donati’s first publication was a book on the theme of nostalgia in the films of Sergio Leone (Sergio Leone. America e nostalgia, Falsopiano 2005), and he is in the process of writing his second book (on Douglas Sirk). As a professional journalist, he has written for publishing houses, newspapers, journals, and magazines on culture, film and literary topics. Donati has worked in the film industry in Los Angeles and is developing screenplays and documentary projects for television and cinema. As Demon #2, he greatly enjoyed slaughtering Coralina Cataldi-Tassoni in Dario Argento’s The Third Mother. He is a freaky blogger.