One of the most fundamental characteristics of cinema – and by extension, animation, whether considered as the immediate predecessor of motion pictures, or snobbishly treated as its subordinate- which sets it apart from other visual art forms is its pronounced temporality. In the context of a medium which occasionally exhibits moments of self-reflection, time can break forth as a filmmaker’s main obsession to be dealt with in his/her creative work. Koji Yamamura’s Muybridge’s Strings (2011) is an experiment in similar vein, also presenting an ambition for drawing a link between salience of time in cinema and in the human life in general. Allegedly motivated to create this animation by taking note of changes in his household, Yamamura strives to transcribe his own perception of time into the visual language. Nonetheless, as an artist working within confines of a temporally-operating medium, his understanding of time would be inexorably imbued by the structure of the medium itself. Such a reflexive influence makes itself known in the choice of the eponymous central character of the film narrative, a film pioneer, Eadweard Muybridge (1830-1904).

Muybridge’s fame has been largely forged on the basis of experiments he carried out with a multiple still camera setup, initially aimed to substantiate a scientific answer to this question: whether or not there are moments in a horse trot when all the horse’s legs are off ground. Muybridge’s solution for discovering the truth was to break down the horse’s continuous movement into tiny splinters of time by sequentially activating a row of cameras through connected strings. Running across the bridle path, strings were cut as the horse rushed by, making cameras fire to capture individual instants of the animal’s movement. The title of Yamamura’s film directly refers to this historical experiment, without the underlying intention being clarified. In consequence, the film’s portrayal of this experiment suggests a fascination on Muybridge’s part towards converting time into minute separate fractions; an activity that by implication could be also construed as congealing the essence of time in isolated moments. 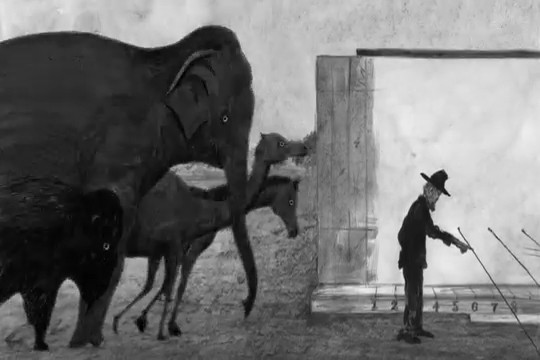 The importance of moments in Muybridge’s story is not limited to his obsession with capturing them. Muybridge’s personal life was clouded by a tragedy, which also makes its way into Yamamura’s animation: the discovery of his wife’s illicit affair and his subsequent decision to kill her lover. The film’s depiction of this incident is quite brief that given the short length of the film should not come as surprise, but in a sense its presentation in form of fragmentary moments once again resonates with the idea of investigating the nature of time in its smallest compartments in earlier scenes. In reality, killing occurs in a tiny fraction of time, but one that irrecoverably changes the course of events. To underscore the importance of the moment to the scene where Muybridge carries out his murderous intentions, the director uses an extreme close-up of Muybridge’s eye over which the image of the running horse is drawn. Through its repeated use in both frozen and continuous forms, the running figure of horse has been already associated with Muybridge’s experiments, therefore its application in this scene in effect lays further stress on the significance of moments as constituents of the flow of time. 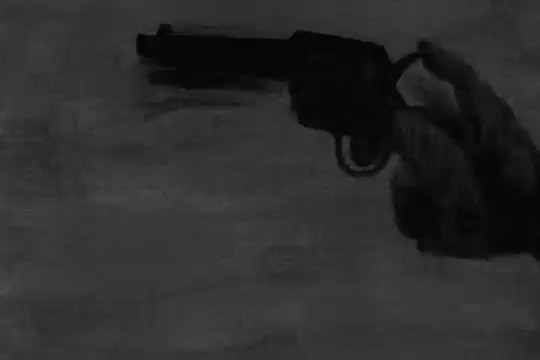 Through allowing this biographic twist into his film, Yamamura seems to have problematised Muybridge’s initial attempts to get hold of the essence of time by fracturing it to its individual moments. While photographed moments of a horse trot seems to have effectively isolated small fragments of a continuity and created the impression of mastery over time and possessing it so to speak, the following personal drama gives lie to this illusory notion. Muybridge cannot get veritable hold of the moment of shooting, neither is he able to reverse it. To reiterate this failure, Yamamura resorts to the entirely metaphorical image of him in a race with a tortoise. The race scene falls back on our recollections of the famous Aesopian fable of the tortoise and the hare in which tortoise’s slow but steady and persevered progression outstrips the hare’s vainglory about his stunning running speed. In a similar fashion, Muybridge succumbs to the invincible flow of time and its ticking away moments. While at the beginning of the film, he is identified with his attachment to his watch – an instrument that similar to his sequential photographs translates time into ostensibly easy to grasp units- after the traumatising incident, he lets go of it by dropping it into the deep sea, where it is gobbled down by a fish. 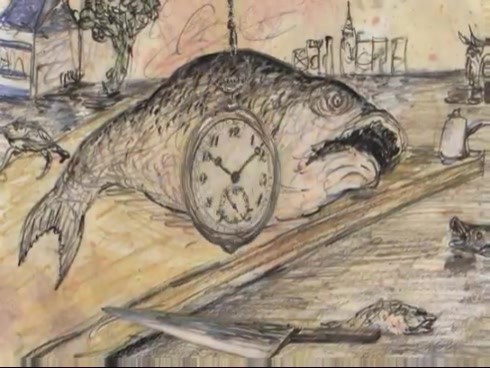 The fish delivering the watch in its guts, however, functions to connect two narrative layers of the film. As such, it also helps time to be portrayed not only as a fluid concept- through recourse to the association of the fish with the sea- but also as a universal and ubiquitous concern. Yamamura’s film is alternating between two parallel timelines, each referring to a different geographical area. The second set of the images belongs to contemporary Tokyo and depicts everyday life of a mother and a child in an almost abstract manner. No central incident or turning point is implemented into this contemporary account; in compensation, it features a greater number of allegorical images, including one showing the mother and child with clock-shaped heads floating over the screen, which could be perceived again in keeping with segueing vehicles of fish and sea. By using a caption to refer to a specific geographical area, namely Japan- which could not be identifiable otherwise- Yamamura not only emphasises the attachment of this film to his personal concerns, but also injects into his film a sense of universality – since the first story takes place in the United States- which reverberates on the director’s openly stated ambitions about the international appeal of his works. The film’s two stories and timelines are fully intertwined, yet the director has left the audience with a visual clue to tell them apart. In compliance with conventions of using colour to distinguish disparate temporalities, Muybridge’s tale and the contemporary story are pictured respectively in black and white and colour. Nevertheless, the colour palette used in the contemporary scenes is significantly toned down, as it is characteristic of Yamamura’s style, and thus brings these sections closer to the black and white images of the past. Such visual proximity serves to reinforce a sense of unity in the film already established at the level of the story by the agency of the fish and the watch.

Yamamura goes one step ahead to additionally lace two strands together at the level of dynamics of their images. He intersperses the image of mother and her child climbing up or down the stairs with those showing Muybridge registering different animals’ movements, as though to imply the centrality of time not just to Muybridge’s experiments but also to the human life –represented by nameless mother and child– in a larger context. Furthermore such a parallel editing also creates a visual harmony and consistency between two layers of the film. 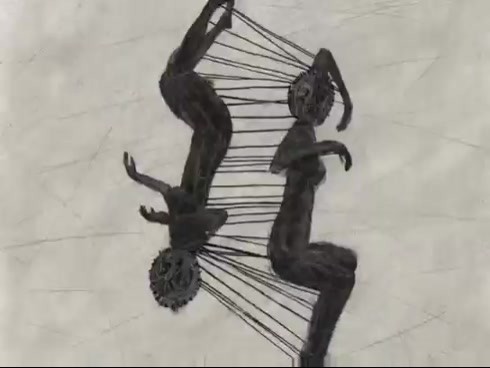 An additional, more intricate connection between contemporary images and those relating Muybridge’s story is established through a pun in the title. The titular strings would acquire a double meaning if one notices the frequent appearance of piano in scenes of the mother and her child. This visual motif –which also corresponds to the central role of music in the film, as the director pointed out in a masterclass during Ottawa Animation Film Festival in 2011– also leads to reflect on the way a music piece is produced by an instrument. In point of fact, a melody is a continuity of notes, while each single note is generated –in the case of piano– by striking a key which in turn brings a string into resonance. Put it another way, strings of piano also work in a way to single out the individual moments, which in this case are building blocks of a musical piece. Somehow Yamamura has shown an ambition to throw up an analogy between moments of time and music; he even goes further to prop up this analogy more visually by placing the back of the horse in the contemporary scenes of piano playing. Following this parallel and duality of implication, the viewer is brought to perceive Muybridge’s struggle as a way to find a constituent element in time that could be analogous to the individual notes of a music piece. (Perhaps a direct or indirect reference to Henri Bergson, who used the flow of musical notes to describe how duration works.)

Yamamura’s rumination on time assumes another dimension in culmination of Muybridge’s story, this time via attending to properties of the film medium itself. The history has it that Muybridge invented an earlier version of cinematography, zoopraxiscope, which recreated motion by the sequential screening of the photographs. The inclusion of a scene of this pre-cinema screening in Yamamura’s film inspires an additional meaning, in the light of the proceeding event of jettisoning the watch. As Muybridge decides to loosen his delusive grasp on time, he also allows the sequestered moments to flow once again and evade the grip of the stasis imposed on them by his photographs. Dispirited by futility of his previous attempts to freeze the time in separate moments, he cuts the holding strings of images and bestows liberty upon the arrested instants. But freed moments appear to engender their own temporality, a temporality that can conflate different layers of time in such a way that both the fish –that carries the watch, the visual emblem of the time– and, by extension, the film we are viewing do. To underscore this new form of temporality, Yamamura terminates his films with one of the images from Muybridge’s zoopraxiscope shows, displaying a mother and a child. The image very well resonates with main characters of the contemporary tale. Although the animated mother and child and figures in Muybridge’s photo seemingly belong to disparate timelines and geographical areas- as indicated by the caption of the animated tale and the historicity of the closing photograph – they still imbricate in an ambiguous way. By virtue of this overlap, Yamamura lets his contemplation expand further: true enough that the tyranny of time is invincible, but the motion picture can generate its own form of temporality which bridges across ages and crosses temporal and spatial limits, as another art-form like music certainly does. 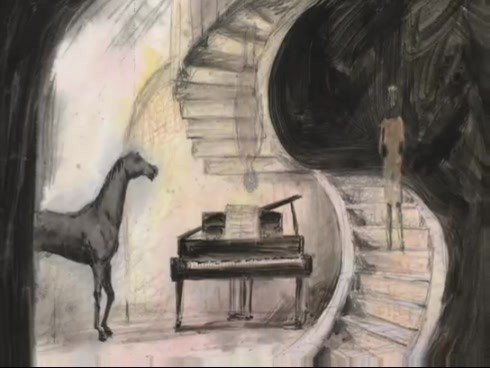 A reference to Marcel Duchamp’s painting, Nude Descending a Staircase?

The last thought brings us to this central question of whether motion pictures could virtually lead to immortality and negate the despotic passage of time. The answer is both yes and no as the last image of the film insinuates: moving images can freely transcend boundaries of time and lead individual lives through building fresh rapports with the new audience, but still can not rid themselves of visual elements that correspond and point to their historical context. Muybridge’s repetitive footage of mother and child, although transcended their corresponding period, still directs our attention to a specific point in history, where moments are ostensibly transfixed into individual frames, whereas time itself was slipping away. Here lies the poignancy of the film, matching the sentiments of a middle-aged man who beholds the incessant trickle of the sand in an hourglass. 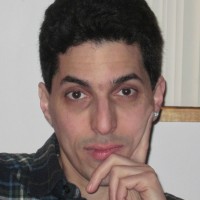 Referring to himself as a cine-aficionado, Ramin S. Khanjani obtained his Master’s degree in Film Studies from Carleton University, Ottawa. His writings and reports have previously appeared in the Iranian publications, Film Monthly and Film International. He is the author of Animating Eroded Landscape:The Cinema of Ali Hatami (2014).