Amer: The Ruins of the Giallo

Either a stimulating discovery for the uninitiated, or a culmination of a unique short film trajectory for the initiated, Hélène Cattet and Bruno Forzani’s Amer is the ultimate homage to the Italian giallo, a dormant genre cherised by a generation of cinéphiles nurtured on home video. The filmmakers were invited to present their film at the 2009 Festival du nouveau cinéma and Offscreen met the creative duo who, with some apprehension, accepted to be interviewed –yet another new experience for these emerging artists.

Offscreen: Can you talk a little bit about your background?

Bruno Forzani: Hélène and I have been making short films together for nine years. We self-produced four short films in pretty much consecutive years, which were somewhat experimental variations on the giallo. We dealt with personal subjects via the codes of the giallo, such as self-destruction, relationships, etc. One of them was called L’étrange portrait de la dame en jaune/??Strange Portrait of the Lady in Yellow??. It was conceived as a performance-giallo, a film exploiting what we saw as the artistic and experimental aspect of murder scenes in the giallo. The film was constructed as a single long take of a murder.

Following that we tried to work with a producer and we made a short film called Santos Palace, which was more in the vein of the spaghetti western, in which all of the action takes place in a café in Brussells…..but things did not go well with the producer! However, we got along very well with the Director of Production, Eve Commenge, who subsequently became our producer. She created her own production company to make Amer and we took three-and-a-half years to make the film. Since we could not fund the film entirely with Belgian financing we had to look for a French co-producer. Through a friend we met François Cognard who had created the production company Tobina Film, and Amer was the company’s first film; so the film became a Belgian-France co-production.

Offscreen: The passage from short film to feature film is quite a common career path for a filmmaker. In your case what pushed you toward making a feature film?

BF: The stories we told in our short films could only be told in the short film format. Our approach with Amer was to make something with more breadth which would take more time to adapt to feature length form. On top of that, our last short film disgusted us. We put so much energy into that project with hardly any return, it was all lost in the collaboration with the producer. At that point we decided that we did not want to make any more short films, only if they were self-produced. We did not want to make any more ‘professional’ short films but wanted to shift to feature length.

Offscreen: However, with Amer there is still a debt to the short film format, since the film is an anthology in three segments dealing with the various stages in the life of the same character. 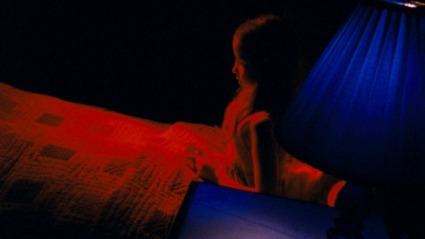 Ana the child in Amer

BF: For the transition to feature film we did not want to entirely abandon the short film format. To succcessfully transfer what we had achieved in the short film, that is to make formalist films with little dialogue where we tried to say the maximum through film language rather than more classical narration, we thought that it would work if we cut the film into three segments, as if they were three different stories which continually renewed the spectator’s interest. Within each segment there are one or two ruptures that give them their own unique dynamic, so we were able to maintain the common universe we created during our six years of short films, and make sure our viewer’s don’t fall asleep! Just because we have shifted over to the feature film does not mean we have to suddenly respond to the imperatives of commercialism and abandon all that we achieved in the short film….or else what did the short films serve? Hence it was a difficult project to mount precisely because it was not very….

Offscreen: Having seen all of your short films, I have the impression that Amer is a creative culmination, we can even say the end of an exploration of a genre.

BF: Well, we did not set out to make the film in terms of our overall career, we simply wanted to exploit this opportunity to the maximum, just as we always did, as the culmination of our nine years of collaboration.

HéC: On top of that, it is really a continuity because it is the same creative team: the same favorite actor, the same camera operator, the same editors, the same sound editor. It is the culmination of our ensemble work.

Offscreen: The idea of culmination implicates approaching a genre which has been, outside of a few exceptions, long dead. What I find interesting with Amer is that instead of making a pastiche or an homage like Tarantino might have, you construct a work on the ruins of the giallo, using outstanding or insignificant elements to create an audio-visual experiment. Perhaps you don’t even need to be familiar with the giallo to live the emotions of film. How did this work of transplantation and transformation come about?

HéC: Pretty much subconsciously. Bruno you say that it all goes back to your childhood, when you were bowled over by the giallo. Can you tell us a bit about that…..

BF: On the one hand, yes I did digest a ton of gialli. It was my favorite genre and the one that marked me the most. I found it to be a genre that united exploitation cinema with a more experimental cinema in the sequences of psychedelia, death and sex. Little sequences that you can set aside and enter into, like a museum. There is this aspect of mixing two genres that can appeal to different audiences that I find hyper playful, and is something I adore about these films. Afterwards, with the spectre of our subjectivity, we set aside the police procedural part of the genre and kept only the fetishistic side of key gialli sequences.

HéC: We kept everything that spoke to us cinematographically, but also the dangerous, experimental aspects, all the liberties that directors took with certain sequences.

BF: Even if they were exploitation films, they had a spirit of liberation.

Offscreen: Which is what is so striking about the giallo compared to the slasher film. Even with such a defined structure, where, if there is a priest we know he will be the killer, there are moments of genius. I’m thinking of Lucio Fulci’s Lizard in a Woman’s Skin, which has some really astonishing scenes, especially when considering it is such a relatively minor genre.

Offscreen: With respect to the second segment of Amer, it is curious that you pay such attention to an event which, in a traditional giallo, would be insignificant. The sexual tension between the young girl and the boy would have probably lasted a few minutes.

BF: It is as if we had a hyper fetishistic approach to the genre where you take a scene that you like and stretch it to ten minutes…..I exaggerate.

HéC: Because it proved inspirational.

BF: Whenever we remember certain giallo scenes we imagine them longer, stretched in time, and then when we see them they are, in fact, short. As spectators we enjoy watching them, so as directors we want to push them to the maximum.

HéC: It is as if we have eaten it, digested it, and spit it back out differently. There is also this playfulness with spectatorial point of view, something that we love about the giallo. It is the most playful device, and the one that we worked on the most. 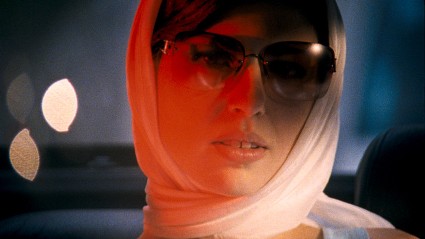 The Adult Ana in Amer

Offscreen: This leads to a question. Theoretical discourse on the horror film usually gets around to issues of the gaze. Amer really plays around with the relationship between the spectator’s gaze and the character’s gaze. Is this a fetish of the giallo or something personal?

HéC: A mix of the two. It is one of the codes of the giallo which affected us the most personally, and which helped facilitate our aesthetic goals.

BF: The play with point of view gives a complexity to the image by opening it up to many meanings, which is what we tried to do by not having much dialogue. You do not have a precise signification with an image, unlike with words, and this opens up the field of interpretation to the maximum. Like in reality, there is always that doubt because you do not know how to read the image. This is what really marked us about the giallo, its polysemic side.

Offscreen: You have devoted yourself to this type of playful manipulation, trying to confound the viewer by leaving the door open to several interpretations. Through the montage and the use of close-ups you take away key reference points because we can not be sure what happens and why. What kind of relationship do you envisage between Amer and its audience?

HéC: We write in a playful manner. Because we write in two, each of us writes our version and gives it to the other to respond to. It is a game between the two of us, where the other is considered like the spectator. When I write Bruno is the spectator and I have a little bit of fun trying to surprise him with my ideas. I hope that this aspect finds its way into the film, where we toy with point of view to amuse ourselves with spectatorial perception, but I would hate if this succumbed to manipulation in order to reveal a particular device, because we want the film to be open to several interpretations.

BF: We transport our spectators into a universe far from reality, where we can offer them new points of view. Lots of close-ups, just to playfully disorient the viewer. At the same time, you can say that the close-up is the appropriate shot scale to represent love, because when we are with somone you love you see them close-up. It represents all the love you can have for the character, or that you can feel toward someone else. It is to plunge into the protagonist’s desires. It is a playful alliance, sexual…

Offscreen: And morbid, since the desire of the killer enters into it.

Offscreen: How did you approach the story?

HéC: The story is driven by a construction built around emotions. We move the narrative through microcosmic, revelatory details which emanate from the characters.

BF: We adore them!

Click here for essay on the film, “Amer: The Three Faces of Ana.”