So I joined up in this online Westerns course as an opportunity to catch up (and, in some cases, re-catch up) with a slew of oaters from yesteryear with the first week bringing a pairing of Budd Boetticher’s excellent technicolor Ride Lonesome (which I recently scratched down my musings on and posted right here at my column) with this sweaty and brutal Eastwood/Leone joint, the one that basically began the whole Spaghetti Western boon that kicked off in the late 60’s (naturally, the Eye-talian spaghettis were going to be prolific because – from peplums, to gialli, right on through poliziotteschi and the post-apocalypse, those wildly energetic and opportunistic Italians were always ready to copy themselves to death – and thank goodness there were so many amongst them as good at being fly-by-the-seat-of-their-pants filmmakers as they were at being unashamed rip-off artists). 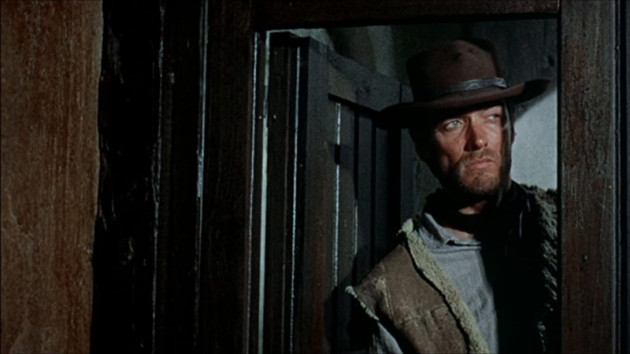 While I’d never seen “Lonesome” before (and found it to be chockful of wonderful surprises), I’ve taken in “Fistful” more times than I can count, in all sorts of venues, on all kinds of mediums (I mean who amongst us hasn’t by this point?)… and each time I never fail to enjoy wallowing in the cinematically sensual indulgences of one of Maestro Sergio Leone’s brutal, sweaty, grandiose and exaggerated Spaghetti visions. I mean, let’s be clear, there are an admirably large amount of these westerns from this particular time and place that are quite amazing (along with a lot that aren’t), with a coterie of directors doing really inspired work (let’s not forget, for instance, the other Sergio, he of the Corbucci name, who, like Leone, also stands above the crowd, and whose equally violent, yet less romantic and more texturally earth-y, nihilistic and morbid aesthetic always has me in complete accord with a trusted film compadre’s take of likening Corbucci, if I may momentarily switch to another abundant treasure-trove of an Italian genre as a reference point, as the Lucio Fulci against Leone’s more spectacularly stylish Dario Argento).

“Fistful” isn’t the greatest of the Leone westerns, as each of the four get immeasurably better, with Leone’s surer and surer hand cultivating a greater sense of operatically-composed mythology with each entry, culminating in perhaps the greatest Western – and certainly the greatest Spaghetti one – ever made, the one with the perfectly matching title, one that signifies a kind of bold – and rightful — claim to ownership over the entire playing field, Once Upon a Time in the West. Of course, the films are all helped immeasurably by another maestro, the musical one, the late great Ennio Morricone (who I have mentioned recently herein for his deeply gorgeous score for that greatest of all Jaws knockoffs, Orca), as none of these films would be the same without his mythically romantic – and wildly cacophonous – scoring, music that announces itself immediately over that animated rotoscope style opening credits that would become super-familiar (but yet always welcome) over the entire spaghetti western landscape (with it often scored by Morricone, as, man, did he end up doing a lot of these spaghettis).

There are a few moments that don’t quite work for me in “Fistful” (I mean… how exactly the two warring families don’t recognize those federal soldiers sitting propped up against a cemetery tombstone as dead is beyond me, and Clint’s Man with No Name’s decision to wear a concealed piece of iron to fool wild-man Gian Maria Volonté’s brutal primitive Ramon seems a bit ill-conceived, considering Ramon can just easily say to heck with his favored target of the heart, and shoot him in the face) – the type of awkward moments that disappear for good by the time For a Few Dollars More shows up the following year – but, I mean… come on.

How can one ever forget the Man with No Name emerging, in an image of pure mythic grandiosity, from the smoke of dynamite explosions? Or the absolutely startling brutality (three years before The Wild Bunch would emerge to get it to the next level). There’s the sweat and grime (and sense of genuine place)… and, most of all perhaps (at least it felt so on this viewing), along with the exaggeration of just about everything, is the tone of cheeky irreverence (I’d call the film a comedy if it didn’t have such startling interludes of harshness, including the beating up of Clint’s character that takes so long and is in such detail it approaches the fetishistic, and the absolutely stunning nightmarish set-piece of the Rojo’s burning out and slaughtering the Baxter clan, in which Leone seems to suddenly channel the imagery of Mario Bava and the Italian gothic); it’s a tone in which Leone and the film are laughing in the face of, while respecting at the same time, the traditions of the Hollywood western.

Thinking on it after re-watching this time, I realized Leone would take Clint’s mysterious Man with No Name as far as he could. Other than the occasional moral compunction (for instance, to save Marisol and her family in “Fistful”), the character is more vessel, ghost and stylish composition, than human being (unlike, say, Eastwood’s Harry Callahan, who represented an ideological right-wing patriarchal-supporting position, which allowed for more story and thematic expansion around the character, such as Harry taking on a more radical right-wing group of rogue cops who he discovers actually worship him in the first and best “Harry” follow-up, Magnum Force, and then him dealing with a new partner who happens to be female in The Enforcer).

While “Fistful” represents the character’s introduction, Leone wisely realized he’d need more than that for the films to follow – so, For a Few Dollars More becomes Lee Van Cleef’s Colonel Douglas Mortimer’s story, while the backbone for The Good, the Bad and the Ugly becomes Eli Wallach’s shifty Tuco. Then, for his last one – the outright masterpiece of the bunch — he jettisoned the character all together.

Still, Leone and Eastwood’s (and Morricone’s) Man with No Name will live forever. A Fistful of Dollars might be the least of the four, but it’s the first, and damn is it a pleasure to revisit.