Two penniless, sexy 20-somethings decide to get the hell out of their boring provincial town and hitchhike to Rome, with only free love and sex to offer along the way (as the more adventuresome of the girls energetically repeats her mantra, something to the effect of “We’re hot, horny and free!”). I knew nothing of this film (except that I was a fan of the director Fernando di Leo’s brutal 70’s Italian crime pics) and had no expectations other than it looked like it was gonna be a relatively softcore (though with the European promise of it being at least a bit more hardcore leaning than the similar American pics of the time) sex romp as the girls gleefully romp into ‘sexual liberation’ (affording the opportunity for the young male audience to ogle these hotties getting naked and having sex, of course). Having it’s cake and eating it too, so to speak, but in fairly innocuous style; little harm, tiny foul. 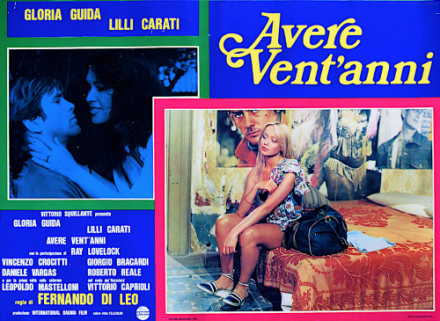 It starts in fairly charming, if silly, style and I wasn’t even entirely surprised as it grows a bit harder edged and political (as many of these Italian genres films did) at about the 30 minute mark, with the daring yet trusting girls arriving at a free love commune that not only turns out to be far shadier than they expected — a den for prostitution and drug dealing — but leads to some fairly intense moments of stormtrooper-like cops busting down the doors and torturing the young inhabitants for information. Saying that, however… nothing prepared me (or the row of female millennials in front of me who went entirely — and finally! — gobsmackingly silent) for the extremely sudden, incredibly savage finale in which, I guess you could say, the girls get their comeuppance for all of that unashamed liberation and desire. Its not hyperbole to say the shocking violence of this final scene operates on the level — and perhaps goes further (for better or worse) then anything in the rape scenes of I Spit On Your Grave — only, in this, it isn’t followed up with the cathartic violence of female victim taking out male perpetrators for what they’ve done. Uh uh. It’s harsh stuff (especially as it comes out of nowhere) and yes, okay, the perpetrators are shown as pretty bad guys but… if I had to make a judgement call, I’d say as the aging Mr. di Leo, as effective an Italian genre specialist as he was, might have been a tad resentful and unpleased with all of this new sexual freedom going on around him.

It’s hard to necessarily defend where the film goes but I can’t help but admire that shameless sensationalistic approach of prolific Italian genre filmmakers like di Leo, who just weren’t afraid to go all out into shockingly lurid territory. Certainly a film I won’t be forgetting anytime soon.