Jug Face and the Legacy of The Lottery

As the credits roll, Jug Face (2013, Chad Crawford Kinkle) presents us the film in miniature in the form of an animated graphic cartoon, illustrated in vivid greens and reds and blues accompanied by a hypnotic score by Sean Spillane. The rural community, the woods, a pit, a human sacrifice, the story elements are all there. Jug Face then begins post-credit in a manner reminiscent of another indie horror I enjoyed from a few years back, Shallow Ground (2004), where we are abruptly plucked into a mid-action chase with a similar feel and rural location. In Shallow Ground the character running through the woods is the ‘ghost boy’, in Jug Face it is a young woman running from a same aged young man (although a similar ‘ghost boy’ appears later in Jug Face). They eventually catch each other and have sex in the bush, up against a tree. We soon learn they are brother and sister, which means we must be in the horror land of the rural backwoods community, where incest and inbreeding is par for the course, and one of the common traits that separates the rural community from the urban sophisticate in the lexicon of these films. Only here the incest is not condoned by the parents Sustien (Larry Fessenden) and Loriss (Sean Young) of the siblings Ada (Lauren Ashley Carter) and Jessaby (Daniel Manche). The sex between brother and sister is a form of rebellion against the insularity imposed upon the children by the community, or at least, an effect of the boredom Ada (Lauren Ashley Carter) feels as a young woman in a community where rules and tradition take root above individual expression. These factors alone tell us that Jug Face is not your usual backwoods horror film, but a unique and fresh exploration of a common horror trope. 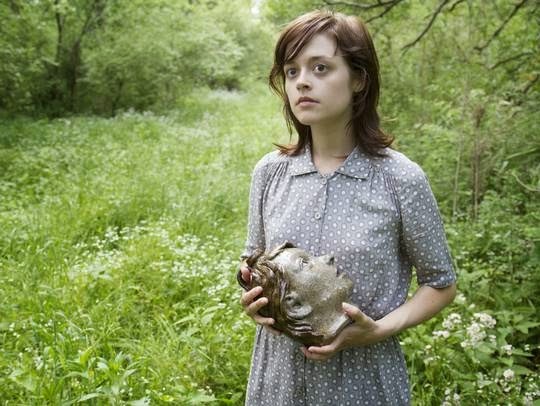 Ada with Jug in Hand

Circumventing Ada’s personal issues is the central plot of Jug Face, which concerns a sacrifice from within that the isolated community, led by its ‘elders’, makes to a ‘pit’ in order to maintain the community’s health and well-being. The proverbial backwoods or rural horror has a long history of stereotypically depicting rural characters as ‘uncivilized’ and ‘dangerous’. In some respects it is a return of the old western dichotomy of wilderness vs. civilization. In fact in her recent book The Rural Gothic in American Popular Culture: Backwoods Horror and Terror in the Wilderness (2013) author Bernice M. Murphy makes this point by noting this fear between the new to America New England Puritans and Native Americans. In the horror film this duality can encompass city/country, rich/poor, educated/uneducated, civilized/savage, capitalist/anarchist, New World/Old World, Order/Chaos.

Jug Face blends two sub-species of the rural horror film, the primitive backwoods community that lives cut off from the modern world (Deliverance, John Boorman, 1971, The Texas Chainsaw Massacre, Tobe Hooper, 1974, Southern Comfort, Walter Hill, 1981, The Backwoods, Koldo Serra, 2006, _Wrong Turn, Rob Schmidt, 2003; and the ritualistic small community that maintains its isolation from the ‘corrupt’ modern world but at the expense of a sacrificial lamb (Robin Redbreast, James MacTaggart, 1970, The Village M. Night Shyamalan, 2004, The Wicker Man, The Wicker Tree, Robin Hardy, 1972, 2014, We Are What We Are, Jim Mickle, 2013, and the Hammer studio reboot, Wake Wood, David Keating, 2009. The literary template for the ‘sacrificial lamb’ tale amid a small town community was set by Shirley Jackson with her groundbreaking 1948 short story, “The Lottery”. Author Murphy also invokes Jackson’s story along with Thomas Tyron’s Harvest Home, T.E.D. Klein’s The Ceremonies,and Stephen King’s Children of the Corn, as works of fiction that feature “the trope of the isolated rural community which mindlessly replicates the attitudes and behaviours of previous generations… which often revolve around the idea of ceremonial human sacrifice” (75). Jackson’s story struck such a profound emotional cord that it took root in the popular American consciousness as a tale that could be shaped to reflect varied social , political and cultural meanings, from Pagan to Christian to supernatural. There have been many straight short and feature film adaptations of Jackson’s story (do a search on Youtube and you’ll find out ). The story even influenced science fiction, as evidenced by the writer Zenna Henderson who wrote a series of stories, titled “The People”, about extraterrestrials stranded on earth and forced to settle into human communities around the world. One of her stories, “The Pottage” was adapted into a Made for TV film, The People (John Korty, 1972), about aliens who assume human identity and live isolated from others in a rural community (this in turn must have influenced M.Night Shyamalan’s The Village).

Although Jug Face feels stretched and eventually succumbs to more familiar horror tropes, it also spends a considerable amount of its time carving out a unique vision of horror as an insular world of family and community. In the tradition of the backwoods community the horror comes when a member(s) of a modern/civilized city comes in contact with the backwoods community and encounters the usual tropes of the genre: “… poverty, inbreeding, deformity, mental retardation, rape, and the ever present cannibalism” (Alessandra Magrin, “ Bernice M. Murphy, “The Rural Gothic in American Popular Culture, Backwoods Horror and Terror in the Wilderness.” European Journal of American Studies, Reviews 2016-2. http://ejas.revues.org/11395) What sets Jug Face apart from these many ‘backwoods’ films is that it does not play off of this duality of backwoods vs. civilized community. There are no ‘outsiders’ who become trapped or preyed on in the film. The film deals exclusively with the rural community and it is not set off as being worse than or more dangerous than ‘our’ society. Unlike the countless backwoods horror films which depict the rural locals as singular entities that incite fear and disgust, the characters in Jug Face are finely drawn and written with breadth and complexity, especially Ada’s parents, played superbly by Larry Fessenden and Sean Young.

In Jug Face the identity of the next sacrificial victim is revealed through a ritual which bears a certain supernaturalism: the community’s potter, a slow witted man with psychic powers named Dawai (Sean Bridges), makes clay jugs which are sculpted in the form of a human face. The figure of that face identifies the community’s next sacrifice. The face which appears on the first jug we see is that of Ada, which means she is set to be selected as the next sacrifice. Things are complicated because Ada (Lauren Ashley Carter), embroiled in a sexual relationship with her brother, learns she is pregnant with her brother’s child. She makes the decision to break the community’s rules by stealing the jug and hiding it to avoid being the community’s next victim. Instead, the young man groomed by the community to be Ada’s husband, Bodey (Mathieu Whitman), becomes the next victim –the ritual concludes with the victim kneeling over the pit and having their throat slit. The wrongful sacrifice of Bodey unleashes the spirit within the pit and murders begin to occur in the woods, with Ada’s father one of its victims. When Ada reveals her act of treachery to her mother, Loriss must decide between her daughter, or the law of the land. As Loriss tells Bodey’s father, “the pit wants what it wants.” In the end, Ada decides to sacrifice herself to spare Dawai, who admits his love for Ada. Ada is aligned with Dawai as ‘outsiders’ within their community, marked by their ‘differences’, Dawai for his psychic abilities and Ada for her headstrong individualism. The audience empathizes with Ada, which makes her tragic demise all the more nihilistic. And yet in the film’s moral world, it feels like the only possible ending, one which will restore order and calm to the community.